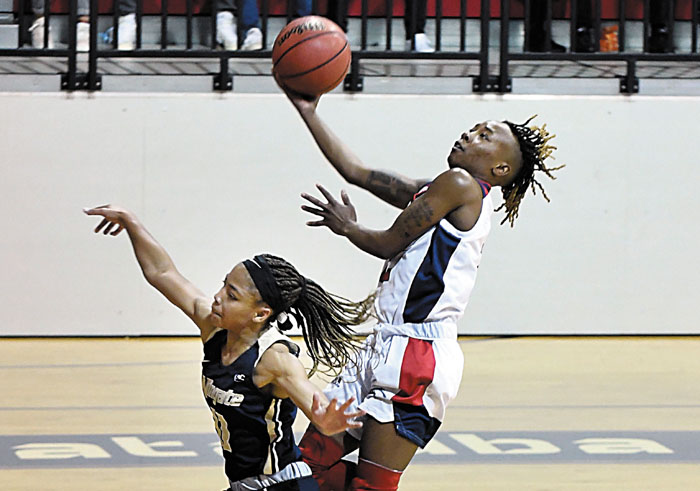 Catawba's Shemya Stanbeck (2), shown during an earlier game this season. Stanback scored 18 points against Anderson at the SAC Tournament on Saturday. .. File photo by Wayne Hinshaw, for the Salisbury Post

DeShazo scored 22 points for the fifth-seeded Indians in a 75-71 overtime setback to top-seeded Anderson at Furman University’s Timmons Arena.

DeShazo had to sit out Catawba’s four previous games as an NCAA-mandated penalty over an eligibility issue, but she has been able to practice with the team and was ready to go. The talented junior carried Catawba’s struggling offense, at times. She made three 3-pointers.

Shemya Stanback, a junior enjoying a breakout season, turned in a terrific game with 18 points and eight rebounds. Stanback made both of her 3-point attempts.

Freshman point guard Lyrik Thorne didn’t have a strong shooting day, but she made only one turnover in 34 minutes.

Catawba shot just 31.9 percent from the field, but was a respectable 6-for-17 from 3-point distance and made 19 of 25 free throws. Catawba did a solid job on the offensive boards, but didn’t win the turnover battle, which is critical for the Indians’ style of play. Catawba turned it over more often (19 times) than Anderson (17).

Alexy Mollenhauer had 22 points and 15 rebounds for Anderson. The SAC Player of the Year became the first in program history to surpass 1,000 rebounds as well as 1,000 points.

Madison Baggett, who made the 3-pointer that sent the game to overtime, scored 17 for the Trojans.

Catawba (23-6) won’t know if it will play again until the brackets for the Division II playoffs are announced at 10 p.m. on Sunday.

Anderson (26-4), which has beaten Catawba two out of three this season, will play Tusculum in Sunday’s SAC championship game. Tusculum won 81-73  against Carson-Newman in Saturday’s other semifinal.

Catawba, under the direction of recently promoted head coach Terence McCutcheon, was one stop away from winning the game in regulation.

Anderson started fast and led 21-16 after a quarter.

But Catawba took the lead in the second quarter and took a 37-34 edge to halftime.

Catawba led throughout the third quarter and was up by as many as six points. Anderson rallied in the fourth quarter.

DeShazo snapped a 62-all tie with a clutch jumper with 1:41 remaining.

Stanback went to the foul line with 26 seconds left with a chance to put Catawba up four. She made the first for a 65-62 edge, but she missed the second.

Baggett missed a 3-point try with 10 seconds left in regulation, but Anderson retained possession after a battle for the rebound. With five seconds left, Baggett connected from long range to tie it.

Catawba’s Madi Hallman missed a 3-point try at the horn.

Anderson shot 38.1 percent from the field, but the Trojans went 23-for-32 at the foul line, and scored consistently on free throws in the overtime session.

In the overtime, Stanback made two free throws with 2:22 remaining for a one-point Catawba lead.

Down one, the Indians had repeated opportunities, but couldn’t score. DeShazo finally split two free throws with 42 seconds left for a 71-all tie.

Mollenhauer made one of two free throws to put Anderson up one. Then Mollenhauer blocked a layup attempt by DeShazo with 12 seconds left, and the Trojans got the ball.

Valencia Carroll made one free throw for a two-point Anderson lead with 10 seconds left.

Catawba turned it over. Then Baggett made two clinching free throws for Anderson.