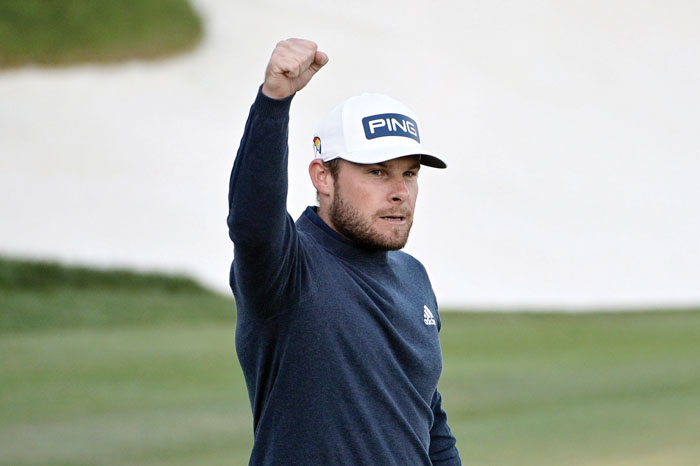 Tyrrell Hatton, of England, celebrates after sinking a putt for birdie on the 18th green to take the lead during the third round of the Arnold Palmer Invitational golf tournament, Saturday, March 7, 2020, in Orlando, Fla. (AP Photo/Phelan M. Ebenhack)

The severity of the test Saturday in the Arnold Palmer Invitational — wind, cool air, thick rough, brick-hard greens, a few tucked pins — made it feel more like the U.S. Open in June.

No one broke 70. Only one player broke par. That was Max Homa, who finished an hour before the leaders started. Brooks Koepka had an 81, the highest score of his PGA Tour career.

Tyrrell Hatton ended the most brutal day at Bay Hill in 37 years with a 30-foot birdie putt on the final hole, and he thrust his arm in the air without really knowing why.

“I don’t normally fist pump on a Saturday,” Hatton said after his hard-earned round of 1-over 73. “I think it was more shock that the ball actually went in the hole. And very relieved.”

He might have been happy to have survived, or that gravity that pulled the ball into the cup kept it from rolling another 8 feet, or that it gave him a two-shot lead over Rory McIlroy and Marc Leishman.

“I don’t think anyone enjoyed that today,” he said with a laugh. “It was just … it was just so hard.”

McIlroy was happy with his run of 13 straight pars, delighted to make his first birdie on the par-5 16th and not terribly bothered by a bogey on the final hole for a 73. His goal was to survive, and he managed that.

Leishman has rarely been more thrilled with a round at even par — two bogeys, two birdies, 14 pars. He had to make sure that’s what he scored.

“I actually added my score up and kind of did a double-take,” Leishman said. “It added up to 72 and it felt like I shot 65. So yeah, it was really tough. The greens were firm, fast. It was exactly how you wanted the golf course to play, really. Par was a great score, and hopefully I can play like that again tomorrow.”

Hatton had a wild ride at the end as temperatures felt like the mid-50s with the wind. He had one par over his final five holes — birdie-bogey-bogey-birdie — before his big birdie at the end.

Homa made the cut on the number and played early — no advantage on this day with wind and cold air that felt more like California during the West Coast Swing — and made double bogey on the 18th hole that ruined a tremendous round. He had to settle for 70. By the end of the day, it was the only score under par.

Palmer loved a hard test and surely would have given this day a thumbs-up.

As for the players? That depends on who was asked, and particularly what they shot.

Koepka played his final four holes in even par for an 81, his highest score on the PGA Tour, surpassing the 80 he shot in the second round at Muirfield — the course in Scotland, not Ohio — for the 2013 British Open.

Patrick Reed, who started the day three shots out of the lead, was still in the mix until two shots in the hazard on the 11th hole for a triple bogey. He three-putted for a double bogey on the 15th. And then it got ugly on the par-5 16th when his second shot from a bunker rifled through a tree and into the water.

As he was taking his drop, a man shouted, “Don’t hit it in the water, cheater.” Police ejected the fan from the course. Reed made bogey, bogeyed the next two and shot 80. It was only his fourth career round in the 80s.

There was carnage everywhere.

Sung Kang was the only player to reach 8 under for the day. He started out in a tie with Hatton and was holding his own until hitting his tee shot and his approach into the water for a triple bogey. He went out-of-bounds with his final tee shot and closed with another triple bogey for a 78. He still was only five shots behind.

Only eight players remained under par. The lone American in that group is English — Harry English — who hit his tee shot 260 yards on the 221-yard second hole, courtesy of the fickle wind. He made double bogey, three other mistakes and countered with enough birdies to stay in the game.