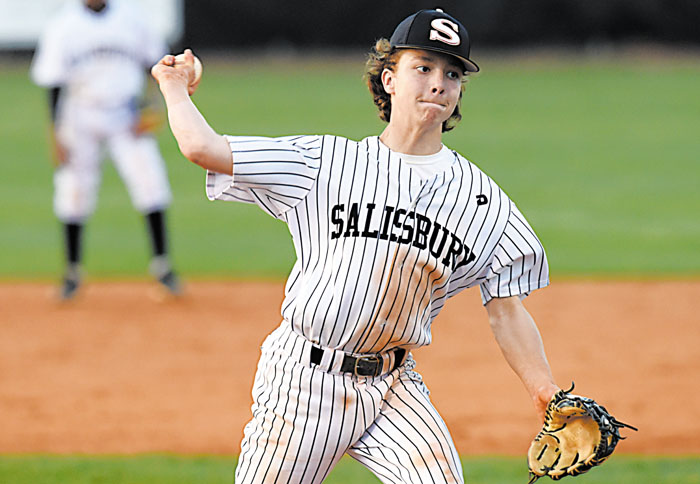 Wayne Hinshaw/for the Salisbury Post ... Salisbury’s Vance Honeycutt, shown pitching against Ledford last year, returns as the starting shortstop and a pitcher for the Hornets this season.

SALISBURY — It’s going to be different for Salisbury.

Salisbury coach Mike Herndon was able to construct game plans, lineups and pitching staffs around studs Bo Rusher and Jack Fisher for years, but  the Hornets no longer have that luxury.

Rusher and Fisher have moved on to college baseball.

When Salisbury went into a game with Fisher starting and Rusher ready to close, the Hornets believed they had a chance to beat anyone, and a lot of times they were right.

Subtracting those two is like losing four good players because they were proficient hitters as well as hurlers. Fisher and Rusher were athletes who helped the defense. Rusher, a catcher who clobbered five homers and hit .377, leaves a large vacancy behind the plate, and his backup, David Holden, also was a senior.

“Not many programs around the state lost two Division I players, and they’re not easy to replace,” Herndon said of Fisher (UNC Wilmington) and Rusher (Gardner-Webb). “So it’ll be different, but we’ve still got some good kids and we’re going to try to compete.”

Salisbury also will miss Blaine Shellhorn, who manned right field the past few seasons and provided speed and toughness. Shellhorn could throw someone out and he also could slash a double or triple.

Things didn’t go well on opening day for the Hornets — a 21-3 loss to North Davidson — but every team the Hornets face won’t be as good as the Black Knights. Salisbury made five errors, so the defense has to get better. The pitching didn’t exactly shine, but making five errors, giving a team like North Davidson so many extra outs, can make things ugly in a hurry.

So who is back for SHS?

It will start for the Hornets with Vance Honeycutt. He’s an athlete, a talented junior shortstop who has committed to North Carolina. His bat should make more of an impact this season as far as extra-base hits. Right now, his defense and his base-running are still ahead of his offense.

Salisbury also should be fine at third base. Parker Lippard hit .292 last season, and the hot corner is where he’s expected to play most of the time.

Herndon has high hopes that JT Taylor is ready for a big season as the second baseman.

“He’s one of those kids that’s put in a lot of work and he’s gotten bigger and stronger in the off-season,” Herndon said.

Graham Smith, a senior who was in a limited role last season, is the frontrunner for first base duties.

There are familiar names in the outfield with Archie Dees (right), Max Crawford (left) and Patrick Taylor (center). Taylor can run and caught quite a few touchdown passes for the football team. Dees had solid numbers last season and hit around .300. Herndon expects Crawford to take a big step up as a junior. Jackson Murphy, a good athlete, could figure into the outfield mix.

There are some concerns about the offense. Salisbury hit .255 as a team last season, and that was with Rusher, Fisher and Shellhorn batting over .300.

Catching is an area where the Hornets are having to work diligently to replace Rusher and Holden. Herndon rates Chad van der Poel as a fine receiver, framer and blocker of pitches, but the big offensive lineman is still banged up some from the football playoff run. Another offensive lineman, Sam Evans, is learning the catching trade. Most of his baseball experience is at third base. Liam McGee, one of the pitchers, is listed as a catcher on the roster. Lippard can play anywhere, so he might pick up a mitt in case none of the other options work out.

As far as pitching, Lippard went 3-2 last year with a 2.66 ERA. He threw the most innings of anyone on the team except Fisher and Rusher.

Honeycutt was excellent on the mound in limited innings. He logged two wins and a save with a sensational ERA.

“We hope to use Honeycutt as a closer,” Herndon said.

Nick Peltz, a strike-thrower who can work numerous innings with a low pitch count, had several good outings  last season. Crawford. Smith and McGee are the other likely hurlers.

“Hopefully, we can play clean defense and give ourselves a chance to compete,” Herndon said. “Making the playoffs is a goal.”

Assisting Herndon is his son, Carson Herndon, the former D-I pitcher, along with Lance Poole and Mike Bauk.

The Hornets probably can compete this year and maybe even in 2021, but there aren’t many baseball players in the freshman and sophomore classes.