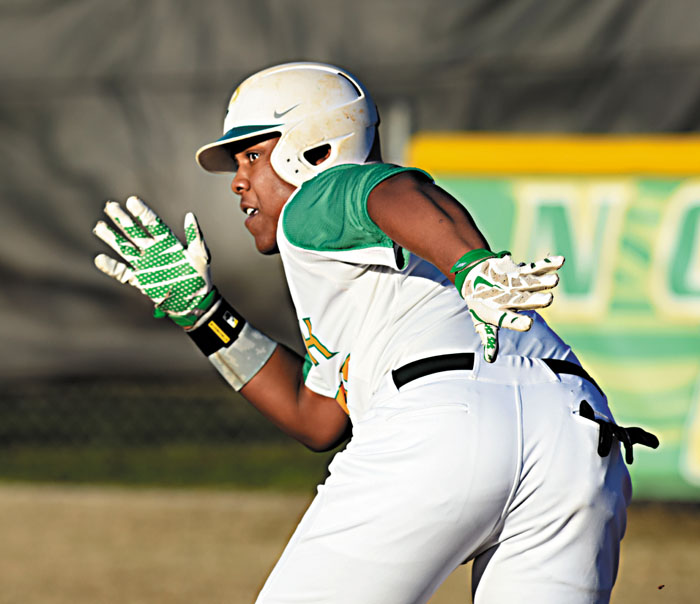 He’s inherited a good situation, with an unusually stout senior class for a 1A school. There are six seniors. Five have been regulars for years, and the sixth, Travis Berry, is expected to move into a full-time role this season.

The best-known player is Jordan Goodine, a senior who made a splash with the Rowan County American Legion team last summer. Goodine was also a standout linebacker for North football and plans to play both sports at Catawba.

Goodine, who bats right and throws left, will be the right fielder and the No. 3 hitter. He could also close games. He runs well and batted .400 with some power last season.

“As Jordan goes, we go,” Hampton said. “He should give us a lot of run production in the middle of the lineup. We’re looking for a big year.”

Jonathan Spry, a pleasant American Legion surprise last summer, will be the No. 1 pitcher and also a key defender up the middle. He can play second base or shortstop.

“He’ll be our go-to guy on the bump,” Hampton said. “He’s a good infielder, and we’re looking for his bat to come alive this season.”

Bryan Lawson will be a critical player. He’ll be the No. 2 pitcher and will play shortstop when he’s not on the mound.

“Good glove and a very strong arm,” Hampton said. “He can get the ball across the diamond very quickly.”

Charlie Durham is expected to be the cleanup hitter and first baseman.

“He’s got a solid glove, and a pretty good bat,” Hampton said. “He’ll be a tough out. We’ll need a good year from him to keep people from pitching around Goodine.”

Left fielder Caelan Stinson will be one of the county’s more athletic players. He’s another good football player.

“Great speed, and he can really go get the ball,” Hampton said. “He’ll be a good leadoff hitter for us, aggressive on the base paths.”

Berry, the sixth senior, will play third base most of the time, but he could move to second base when Spry pitches.

Chase Shoaf, a junior, is a returning starter in center field. This will be his third season as a starter in the outfield and he’ll pitch some. He’s another guy that Hampton believes is ready to break out as a hitter.

Sophomore Kayleb Burleson figures to be the starting catcher.

“He held his own as a freshman and kept getting better,” Hampton said. “He has a very strong arm and his bat is coming around.”

Joseph Hartman will be an important relief pitcher and might get action at first base when Durham pitches.

Kolby Smith has a chance to get playing time at third base.

North needed more numbers and more depth, so Hampton worked hard at getting some members of the football team to give baseball a try.

Tyshon Sifford, Kyree Sims and James Gladden will bring speed and could help as outfielders and base-runners. Sims and Gladden have been involved with the basketball team, but Hampton expects them to join the baseball squad when they can.

Trey Johnson, Jaden Robertson and Malakie Harris are freshmen on the roster who will help in the future.

“It’s been tough to get ready for the season with the weather we’ve had, but we’re excited and ready to go,” Hampton said. “We’ve got an opportunity to open people’s eyes. We’ve got a chance to do some pretty big things.”

North was its own worst enemy at times last season, losing games due to defensive breakdowns. Hampton’s priority this season is instilling a don’t-beat-ourselves mindset.