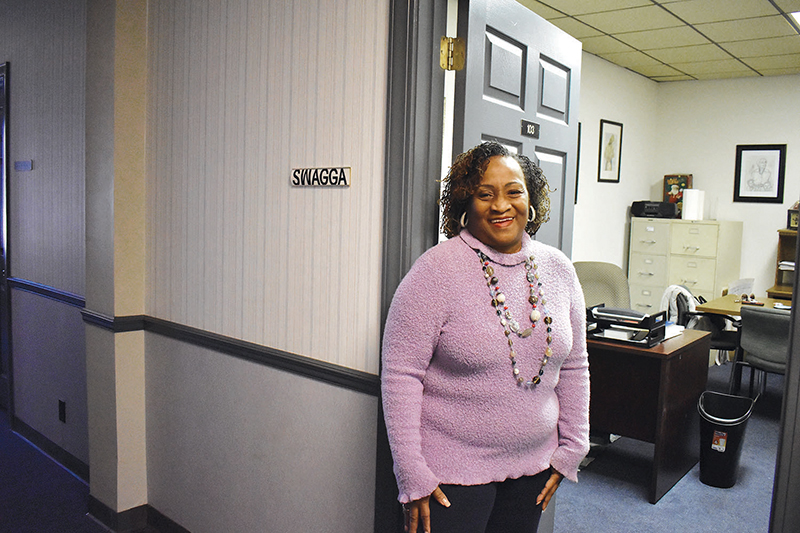 Natalie Anderson/Salisbury Post — Esther Atkins-Smith works out of one office for both businesses she owns — Candelight Consultants LLC, which helps local minorities launch their businesses, and SWAGGA, which is a nonprofit dedicated to tutoring and mentoring at-risk youth.

SALISBURY — Local business owner Esther Atkins-Smith said her mother always told her the words “I can’t” should never be part of her vocabulary.

Atkins-Smith was raised by a single mother, but she had a “village of people” supporting her. She came back to Salisbury to be closer to family after retiring from meteorology in 2004, which is when she began interacting with the community to make a difference. And since her return, Atkins-Smith has joined many other black business owners who are making their mark in the community.

Almost seven years ago, Atkins-Smith began a non-profit called SWAGGA with local artist and business owner Elijah Belton. “SWAGGA” is an acronym for “Students With Academic Gifts and Goals Acknowledged.” The program aims to tutor and mentor at-risk youth.

A message she wants to send to black children is that there’s nothing they can’t do. Often, she said, “they’re not encouraged to reach for the stars.”

Atkins-Smith and her husband, Ricardo Smith, also founded Candlelight Consultants, LLC in 2015, which helps minorities launch their businesses. The firm provides assistance with establishing structure and plans for owners who may not have the money or resources to seek professional help.

The goal is to provide a safe space for those aspiring business owners and “help them be creative in getting their businesses off the ground,” Atkins-Smith said.

But that’s not all. Another business Atkins-Smith helped establish is Two Dots & A Mae Resale Store along with Hilda Bost and Judy McDaniel. She also served as the campaign manager for East Spencer Alderman Tony Hillian as well as Patricia Jones “PJ” Ricks during her run for Salisbury City Council.

Cedric Cuthbertson is the owner of CAC Plumbing, which he started in 2007 when he was 23 years old. He credits himself as the only black owner of a plumbing company in Salisbury. He considers it a honor, but adds that “it’s a little sad” because the world needs more plumbers and tradesmen.

Cuthbertson, a Salisbury native, said he has stayed in the area as “a home team player” to provide employment opportunities for local residents so that they can stay here, too.

And he credits local tradesmen with contributing to both his personal success and business success.

Nicole Holmes-Matangira took over her grandfather’s business, Holmes Iron & Metal, in 2005 after steering away from the family business to pursue her own passions. She also owns Matangira Curbside Recycling with her husband, Daniel.

Holmes-Matangira served as the chairwoman in 2019 for the Rowan County Chamber of Commerce Board of Directors. She said her time in the chamber and on various boards, including the organization’s minority business council, has provided her with a greater understanding of the community.

“I think (the council is) great in terms of being able to bring in more minority businesses,” Holmes-Matangira said, adding that her role as chair served as “a different face” that people may not have always seen.

“I’m not focusing on color, but sometimes, it’s pretty neat when people see — especially (people) coming in who haven’t been part of the chamber — a different face, and begin to say, ‘Wow, I see more minorities becoming involved,'” Holmes-Matangira said. “And it brings other minorities in to get involved.”

Atkins-Smith and Cuthbertson are also members of the chamber’s Minority Business Council. Cuthbertson said he feels the council caters more to aspiring business owners, but he also partially blames himself for not being as active in the council as others are.

“It’s somewhat my fault,” Cuthbertson said. “With the services that I provide, I really want to do more and be more of service to the city of Salisbury.”

Atkins-Smith said the community doesn’t hear about black business owners as much as it should. Though it’s been a great benefit for her, the council should do more to reach out to minority communities to gain their participation, she said.

Cuthbertson echoed those same sentiments, desiring a “little more piece of the pie.”

And while the current business climate in the county has improved and changed, Atkins-Smith and Cuthbertson said it could always be better.

Holmes-Matangira said diversity can serve as a lens into the community.

“I think we’re still growing. And I praise God for the doors that I see opened up,” Holmes-Matangira said.

Black history and excellence should be celebrated all year, Atkins-Smith said.

“We are all here together, as people, as one,” Cuthbertson said. “But I do realize that I’m a (black business owner) and hopefully that might be something that can be put in the record books.”

The most recent data available through the U.S. Census show there were a total of 10,575 businesses in Rowan County in 2012. Among those, an estimated 8,853 were white-owned, 912 were black-owned, 60 were American Indian- or Alaska Native-owned, 108 were Asian-owned, 28 were Asian Indian-owned and 213 were classified as being owned by “some other race.” Of the businesses in Rowan County, 1,546 were minority-owned.

Some businesses in the data were not classifiable by ethnicity and/or race.

According to the member directory of the Minority Business Council, the following are black executives or owners in Rowan County:

Did we miss anyone who should also be highlighted? Contact reporter Natalie Anderson at 704-797-4246.