Legislators: County’s priority projects ‘out the door’ with Medicaid expansion 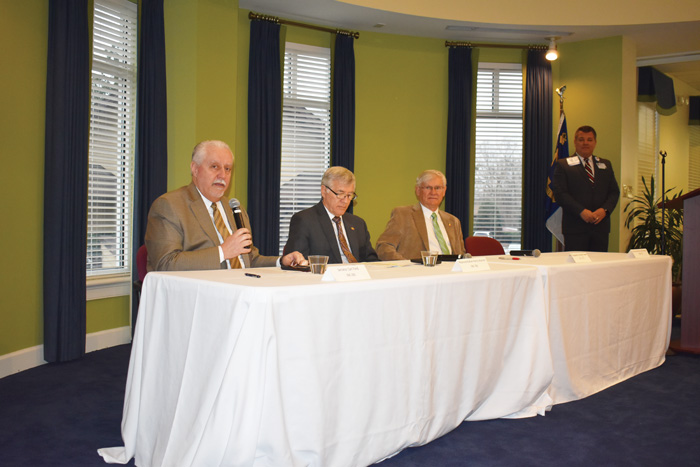 One of the Chamber’s priorities under health care was “support for Medicaid reform that allows providers to lead a cost savings transformational model.” And when local legislators arrived at the topic of health care, N.C. Sen. Carl Ford, R-33, and N.C. Reps. Harry Warren, R-76, and Wayne Sasser, R-67, said they are against Medicaid expansion. Sasser doesn’t represent Rowan currently, but his district has been redrawn to include some local precincts starting in 2021.

The state currently does not have a budget because Gov. Roy Cooper, a Democrat, requested Medicaid expansion be included along with other items and no compromise could be found with Republicans.

If the state expands Medicaid, all the priority projects “just went out the door,” Sasser said.

Though the federal government currently funds two-thirds of the program and would have paid a minority portion of the total cost of expansion, Ford said the state could “trash the whole budget” if Medicaid is expanded.

“There’s not an appetite there,” Ford said. “There’s not money there. That money will go to expand Medicaid to over a half a million able-bodied people. We still have thousands of disabled people that are not on Medicaid and we’re trying to get them on.”

Medicaid expansion would give people insurance who currently make too much for the program and who cannot afford private insurance. Warren said, 300,000 to 400,000 people currently without insurance coverage would receive it and hypothesized that would result in longer wait times. Expansion doesn’t come with an increase in providers, but it’s “ migrating people private employer programs to the Medicaid program,” he said.

At one point during the legislator statements, a man who expressed dismay at some of the answers walked out of the room.  Attendees were allowed a limited number of questions to follow up on answers.

Warren said there are fewer students going into the medical field and doctors are retiring. Doctors are also refusing to take new Medicaid patients because of the lower reimbursement, he added.

Sasser said the Medicaid model is broken. The model is the problem, he said, not the number of people who have Medicaid. He said everyone is compassionate no matter if they are Republican or Democrat.

“We should be looking at fixing the Medicaid model instead of expanding the system that doesn’t work,” Sasser said.

The price of health coverage has gone up drastically and not at the same rate of incomes, he said.

“We have people working two jobs that don’t have health care because it’s so expensive,” he said. “We all have compassion for our fellow man, but we have to balance that compassion with can we afford to pay (for) without finishing (by) bankrupting this country.”

He offered a solution: Medicaid coverage should be for those with chronic health problems and everybody that doesn’t have health insurance should be provided with one free physical a year, which will determine if that person has a chronic illness.

“In 10 or 15 years, those are the people that if they high blood pressure, they are going to have strokes,” Sasser said. “If they have diabetes, they are going to lose limbs. Their kidneys are going to shut down, and it’s going to cost us as a taxpayer $150,000 a year instead of $10,000 a year to treat them. We don’t need to be giving Medicaid to people who go to the doctors four a year because they have a head cold.”

Ford said Medicaid should not be for able bodied people.

“Until we help all the disabled people, I’m sorry I’m not as interested in helping the abled-bodied when we have disabled that truly need the help,” Ford said.

Warren said there is a difference between available health care and having health insurance.

“There are hospitals. There are 24-hour clinics that take people in,” he said.