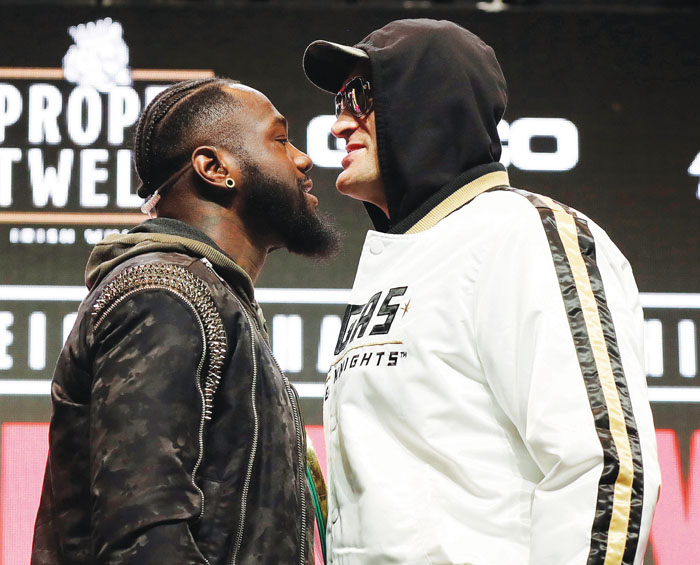 LAS VEGAS (AP) — The best fights come with questions, and there are many surrounding Deontay Wilder and Tyson Fury as they meet in a rematch that is arguably the biggest heavyweight title fight since Lennox Lewis destroyed Mike Tyson 18 years ago in Memphis.

The best fighters usually end up providing the answers, and that’s what makes Saturday’s showdown must-see TV even for those who are only casual fans.

Can Fury outbox Wilder again like he did in the first fight, which ended in a draw? Can Wilder land the same kind of devastating punches that left Fury flat on his back in the 12th round of that fight, seemingly for good, in the 11th defense of his title?

Can one heavyweight rule the roost and give boxing the champion — and division — the sport has been thirsting for all these years?

Tune in to the $79.99 pay-per-view to see those questions answered in a heavyweight fight so big it got a shout-out this week from Amy Klobuchar in the Democratic presidential debate.

“Boxing is back,” promoter Bob Arum crowed. “And as a really important sport, not a niche sport anymore.”

The heavyweight division is back, too, with Wilder and Fury topping a list of attractive fighters that includes another British fighter, Anthony Joshua, and the portly yet charming Andy Ruiz Jr.

Wilder and Fury could make $40 million each in their eagerly anticipated rematch, and there are plenty of heavyweight matchups to get people talking about the big guys once again.

And big they are, with Wilder checking in at 6-foot-7 and 230 pounds of frightful power. Fury is more of a boxer but even bigger at 6-9 and 270, which he reminded Wilder of as they stood in a toe-to-toe face off at Wednesday’s final prefight news conference to promote the bout.

“Look how small you are, you midget,” Fury barked at Wilder.

“You’re the one who was on the ground,” Wilder replied. “I was standing on top of you.”

That’s exactly where Wilder was in the 12th round in the first fight in Los Angeles, and he thought Fury wasn’t getting up. With good reason, because the other fighters he has knocked out during his career — 41 of the 42 he faced before Fury, to be exact — didn’t.

Fury, though, not only somehow managed to pull himself up but finished the fight strong. The official decision was a draw that satisfied neither fighter, but the fight was so entertaining it was certain they would do it again.

Fourteen months later they are doing just that — and Wilder (42-0-1, 41 knockouts) said this time Fury won’t be upright at the end.

“Round 12 has been living in his mind a long time,” said Wilder, the 2008 Olympic bronze medalist from Birmingham, Alabama. “It’s always living in his head. If he says otherwise, he’s lying.”

To be sure, round 12 is living in a lot of heads lately because ESPN and Fox Sports have replayed the knockdown hundreds of times in a relentless buildup for the fight. The two networks are combining to show the pay-per-view, as well as hosting a flurry of programming leading up to the bout.

It may not hit the 1.99 million pay-per-views that Tyson and Lewis combined to sell in 2002, but it’s not for a lack of trying. Both Fury and Wilder talk as well as they fight, and they have done everything possible to make themselves household names in houses where boxing is not normally discussed.

That included some pushing and shoving and trash talking when they met this week at the MGM Grand in a news conference televised by ESPN2 and Fox Sports I that was mostly an infomercial — complete with commercial breaks — for those unfamiliar with the fighters.

“It’s refreshing to have another character in your division be able to talk and promote as well,” Wilder said. “A lot of these guys don’t want to talk and you have to spread the message. And the message is on Saturday night people can witness an amazing fight and, in my case, the hardest-hitting puncher in boxing history.”

That’s debatable, of course, but if styles do really make fights, the two heavyweights should put on a good clash in their rematch. Wilder is predicting a real knockout this time, while Fury says he will turn the tables and go after the big puncher instead of boxing his way to a decision win.

Oddsmakers posted the fight as pick ‘em with no betting favorite, a rare line in boxing. The line is appropriate, if only because these are arguably the two best heavyweights in the world — and they’re not afraid to meet each other in one of the biggest heavyweight showdowns in recent times.