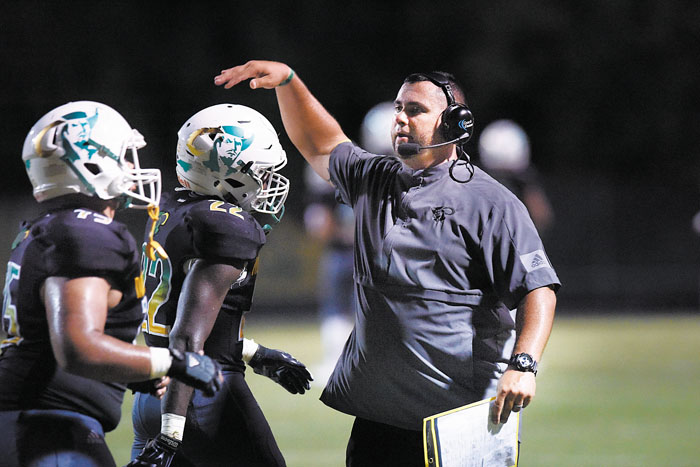 SPENCER — On Ben Hampton’s second interview for the Socastee High School head football job, he took the family along —  wife Catherine and toddlers Atticus and Lily, who were born just one year apart.

He wanted Catherine, a middle school principal, to see the Socastee campus. The temperature was a comfortable 65 degrees, so he also wanted to give the kids a chance to experience Myrtle Beach, South Carolina, 15 minutes from Socastee. Every moment of family time has been precious for the Hamptons, who are on the run just about all day, every day.

“The kids are in their rain boots and sweats, and I’m sitting there on the beach talking to Catherine, and we look over and Atticus is lying on his back and make snow angels in the sand,” Hampton said, with a laugh. “I guess it was just one of those moments. Catherine and I looked at each other and it was like, ‘How can this not be where we are meant to be?'”

That’s where Hampton will be now. He was approved by the Horry County school board as Socastee’s next coach on Monday night.

He’ll be leaving North Rowan, where he has been the head coach for the past five football seasons, on April 1. That will give him a month to settle in and meet the Socastee Braves he’ll be guiding. Football practice in South Carolina begins May 1. Spring practice is a very big deal in South Carolina, 20 days worth of work, and Hampton can get a lot done in 20 days.

“This is a new adventure,” Hampton said. “I’m humbled and I’m blessed to have this opportunity. I’m going in their feet first.”

When he was growing up, everyone thought Hampton would wind up as a baseball coach.  He came from a family of successful baseball players.

When he arrived at West Rowan High to play baseball for coach Chris Cauble, his work on the diamond was still well ahead of his football. As a freshman, in the spring of 1999, Hampton was part of Cauble’s lineup card on opening day. His first high school at-bat came against North Rowan’s Daniel Moore, who would go on to major success at North Carolina and would be a second-round draft pick. That at-bat did not go all that well for Hampton.

For the next three seasons, however, Hampton would bat over .300 every year and would smack 13 career homers as one of the county’s top power hitters.

He also played football for coach Scott Young. He was expected to become a quarterback at West, but Jared Barnette, who was a year older and a star, had that position taken care of. Hampton moved to running back.

As a sophomore, in the fall of 1999, Hampton scored his first four varsity touchdowns for the Falcons.

His junior football season, when West won the first conference title in school history, Hampton scored eight touchdowns. One of them was huge in West’s epic comeback in Mount Ulla against A.L. Brown, the first and still the only time the Falcons have beaten the Wonders in football. Hampton was emerging as a hard-running back who had surprising speed for a player who was 6-foot-2, 190 pounds.

It was during his senior year, that football finally surpassed baseball for good for Hampton. He became passionate about it. He was up to 215 pounds by then, and was crunching defenses. He had 226 carries for 1,628 yards that season. This was before Wade Moore and K.P. Parks arrived on the scene, and Hampton set the school record for career rushing yards with 2,335.

In his career, he threw four touchdown passes, caught seven and ran for 31. He was responsible for 42 touchdowns.

His football career as a fullback at Coastal Carolina University in Conway, S.C.,  followed. He helped get the Chanticleers’ program started. He wasn’t a star for coach David Bennett, but he started games and performed well. He scored six touchdowns and earned his degree. Coastal Carolina is about 20 minutes north of Socastee.

“I loved my time there, and I always had thoughts of getting back there,” Hampton said. “It’s a great area.”

A growing network of coaches and administrators — a brotherhood, as Hampton calls it — opened doors for Hampton after college.

Henry Kluttz had been the principal when Hampton was a student at West Rowan. Kluttz had taken the principal job at Carson when that school opened in 2006. Cauble, the baseball coach, was one of a number of West faculty members who made the move  to Carson along with Kluttz.

“Mr. Kluttz gave my first chance to coach, as an assistant in baseball and football at Carson,” Hampton said. “He took a chance on a fired-up 23-year-old just out of college.”

As an assistant to coach Mark Woody, Hampton learned a lot about football and about patience and perseverance.

“There were trials and tribulations in the early days of Carson football,” Hampton said. “Carson went 0-22 its first two seasons, but by the fourth or fifth year, we were competing in the conference and in the state playoffs.”

The next move for Hampton was to North Rowan. Hampton’s brother-in-law, Joe Nixon, who had been an assistant at West Rowan, was hired as North Rowan’s head coach prior to the 2012 season. It’s a close-knit family. Hampton joined Nixon’s staff at North.

Three very good seasons followed. In 2013, with back JaReke Chambers running wild, North went 13-1 and was ranked for a number of weeks as the No. 1 team in the state in 2A.

Nixon took the reins at West Rowan before the 2015 season, Hampton was named North’s athletic director that same year. He officially became head coach at North Rowan in May, 2015.

Hampton has been head football coach for five seasons (42-21, two Rowan County Coach of the Year awards). He stepped down from AD duties more than a year ago as his family grew. Woody, who had been Hampton’s friend, teacher and advisor at Carson, is now at North and took on the AD duties.

Now at 35, Hampton is ready to take a bold, life-changing step.

Hampton says he’s had great mentors along the way, including Young, Kluttz, Woody, Cauble, and former Carson AD Jim Grkman. Hampton had two former head coaches, Woody and Chuck Henderson, on the North staff this year, and their expertise helped the Cavaliers go 9-4 and win the Yadkin Valley Conference. Hampton also benefited from having defensive coordinator Rodney Goodine, who has college coaching experience. He was helped in previous seasons by such notable assistants as Josh Sophia and Steven Williams.

“Great mentors who gave me so much knowledge, a great community and a great staff at North were with me every step of the way,” Hampton said. “We’ve got great kids and we’ve got great people who take an interest in those kids. I’ll never be able to thank everyone enough for the support I received.”

Hampton has followed Socastee over the years because Doug Illing, Davie County’s head coach for many seasons, was hired down there seven years ago. It wasn’t easy for Illing to duplicate the success he had at Davie. Illing’s debut at Socastee (12-2) was tremendous, but the program’s most recent winning season was 2014. Illing’s last season was 2018. Socastee had an interim head coach, Marty Jacobs, in 2019, winning only one game.

“I knew Coach Illing well from the time when he was at Davie and I was at Carson,” Hampton said. “I knew the school had an interim this past season. I checked to see if the job was open, and it was. I talked to my wife, put in an application, and figured we’d see what happens. I got a phone call, went through the interview process, and I was offered the job. I accepted.”

Reportedly there were 41 applicants. Hampton was chosen from the 17 candidates that were interviewed.

Socastee’s athletic director is Tim Renfrow, who is the school’s former head football coach. Renfrow’s son, Hunter, starred at Clemson as a wide receiver and is now in the NFL with the Las Vegas (formerly Oakland) Raiders.

For Hampton, it’s a big step up in a number of ways. For all its wonderful athletic tradition, North Rowan is now a 1A school with a little over 500 students.

Socastee, which plays in the 5A classification in South Carolina, for the largest schools, has around 1, 700.

So there will be more pay, more responsibility, more expectations.

One of the most important things Hampton has learned a long the way is that no one knows everything. He’s still willing to learn from assistants and even from players. He’ll seek help when he needs it, but he’s also a proven leader.

“My whole family is in Rowan County and North Rowan has a lot coming back next year, so I know I’m taking a chance,” Hampton said. “I’m going down there to try to rebuild a program and build a winning culture at a school that hasn’t won for a while. But I’m ready to take on that challenge. I’m prepared for it. I’m going to take this opportunity head-on and I’m going to run with it.”