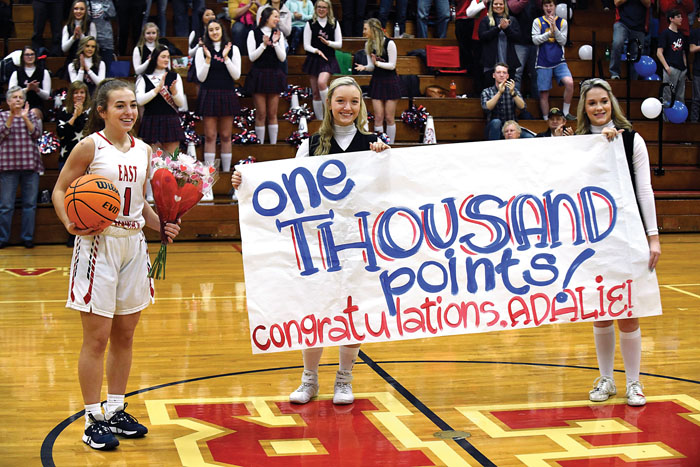 GRANITE QUARRY — When you’re 5-foot-1 and when you’re a pass-first point guard, the road to 1,000 points in high school basketball is a marathon, not a sprint.

Fortunately, East Rowan senior Adalie Harrison is also the county’s cross country champ. She had the stamina to make the journey.

“I run and I do school work and I play basketball,” Harrison said with a laugh. “That’s about all I do.”

Harrison, a four-year starter, reached the major milestone in Friday’s 64-24 romp against North Iredell that gave the Mustangs a tie for second in the North Piedmont Conference.

East has as much girls basketball tradition as anyone in the county, but she’s only the 11th in the program to reach 1,000. The most recent Mustangs to achieve the feat were the twin towers — Karleigh Wike and Kelli Fisher, who are more than a foot taller than Harrison. There’s a long list of East legends who didn’t reach 1,000.

It was Valentine’s Day and Senior Night, so the timing was perfect for Harrison’s magic moment. East fans love Harrison.

She got to 998 points on Tuesday when East beat Statesville at home. Maybe she got a little antsy. She missed some free throws, and she doesn’t ordinarily do that.

So she had to sleep on 998 for three nights and hope she didn’t come down with the flu or sprain her ankle walking down the steps.

“I think Adalie made East about $300 by not getting 1,000 on Tuesday,” former East boys basketball coach Rick Roseman joked, prior to Friday’s game. “There’s 50 extra fans here to see her do it.”

Harrison stood in the doorway, waiting to take the court, as East Rowan’s jayvee boys finished off a close win.

She was fine. She passed the ball the first few times she touched it, as East fans groaned with anticipation. But then there was a steal by long-armed freshman Haley Dalton in East’s press, and suddenly Harrison was banking in a layup from the right side to make it 4-0. The crowd screamed with one loud voice. East cheerleaders were ready. They were on the floor in a flash holding up a congratulatory sign, and there was pandemonium for a brief interval. Harrison bounded into the bleachers for a few hugs. Then she went back to work.

“I’m glad she was able to take care of it early,” Holland said. “Then she could just go play the game.”

She’s been playing the game a long time. At Hall Gym. At the YMCA. Travel ball. Then Erwin Middle School.

“It helped me a lot  when I was young that I had a sister (Hollie) who played,” Harrison said. “She’s three years older than me, and I always got to play to with her and her friends.”

Holland was hired as East’s coach in the summer of 2016. Four starters had graduated. The lone returning starter decided to focus on academics and gave up basketball. The cupboard was about as bare as it’s ever been for any incoming coach in county history. Senior Hollie Harrison, who had scored 23 points as a junior, was the team leader. Her little sister was there, too.

Holland, who had been an assistant coach on 4A champions at Millbrook High in Raleigh, was a little stunned, at first, by the talent level he was greeted with. But you coach the hand you’re dealt, and he’s a patient person.

“I remember the first day we had tryouts her freshman year, Adalie walks in, and I remember thinking she was really small,” Holland said. “But right away, I could see she had it. She had the energy. She had the work ethic.”

That freshman season, Harrison averaged 7.2 points per game. She was the leading scorer on a 4-20 team that struggled to score 40 and ended the season with an 11-game losing streak.

It didn’t get a lot better when Harrison was a sophomore. She averaged 8.7 points per game. East went 5-20, showing signs of life with two Christmas tournament wins, but then dropping its last 12 games. East lost key players Grace Eagle and Zee Winford for extended periods. West Rowan buried the Mustangs by 34 points in the North Piedmont Conference Tournament to end their season.

“Players got hurt and players got sick, and we didn’t have many players to begin with,” Harrison said. “But we never gave up.”

The sun finally broke through the clouds for East Harrison’s junior season. Holland finally had a little depth, and Mary Spry’s arrival brought desperately needed height. The Mustangs started 12-4, but a steady parade of NPC powerhouses — Carson, West Rowan, Statesville, North Iredell — brought the finish down to 14-13. But there was a breakthrough victory against West Rowan in the NPC tournament. Harrison scored 22 in that one.

“Not everyone understands the amount of work it took for Adalie to get to where she is now,” Holland said. “She put in the time. Just about every game she plays now she’s the best ball-handler on the court and the quickest person on the court. She’s our Energizer Bunny. She does not stop. People are always telling me they saw Adalie at the gym yesterday. She does our workouts. She runs cross country. She plays AAU. She practices hard. She brings all she has every game.”

Caroline Houpe, a four-year varsity player, Eagle and Harrison are this year’s senior class for East. The Mustangs have added three talented freshmen to their top eight. They haven’t been able to get over what Holland calls “the Carson hump” yet, but they’ve beaten West Rowan again this season. East is going to win 20 — and then some.

Central Cabarrus just ran the table in the 3A South Piedmont Conference. East wiped out Central, 63-30.

“Our program has grown because our seniors have grown,” Holland said. “They’ve given us a ton of leadership. It’s not a stretch to say we’re not far from being 23-1 right now. We’ve got a good team.”

Harrison has scored in double figures 20 times this season, including the last eight games in a row. She’ll obviously be first team all-county again, but  she doesn’t have to score a ton now. East has big people who can score, and Eagle and Houpe can make shots.  Harrison’s job is to get the ball where it needs to go on offense. Most of her points come on the break or off her defense.

“I’ve played with her forever, since Y ball,” Houpe said. “She’s always been really cool to play with it. I’m so proud that she’s scored 1,000 points.”

Eagle, a shooter who has benefited from a lot of Harrison’s passes, agreed.

“Adalie sees the floor,” Eagle said. “She’s always looking to pass and she always lifts this team up.”

Harrison is being recruited mostly by Division III schools, although Holland and quite a few others believe she could hold her own in Division II.

“I’ve got film of her that coaches need to see,” Holland said. “Schools don’t like to recruit that 5-foot-1 girl, but that doesn’t make a lot of sense if the 5-foot-1 girl is better than the 5-foot-8 girl.”

Harrison smiles through it all. She knows she’ll get to play for some college team. She doesn’t mind being 5-foot-1 and she’s enjoying being 19-5. There weren’t many tears for her on Senior Night.

“It really didn’t feel like Senior Night to me because I know we’re not done,” she said. “We’ve got a lot ahead of us.”