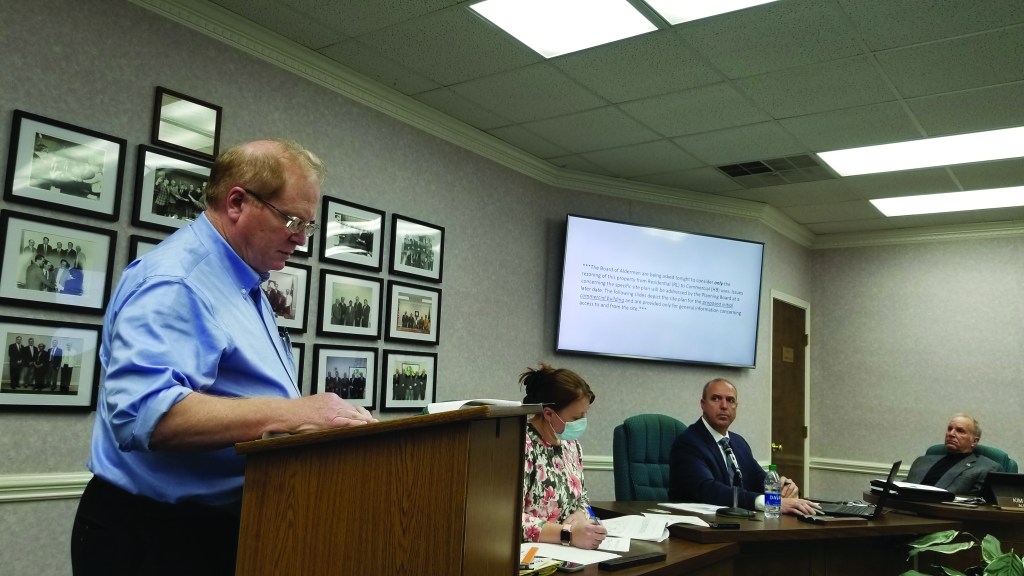 Carl Blankenship/Salisbury Post – Granite Quarry Planner Steve Blount giving a presentation to the Board of Aldermen about the rezoning request for a 10-acre parcel of land.

GRANITE QUARRY – The Board of Aldermen on Monday shot down a rezoning request that would have allowed for a new Dollar General.

The Granite Quarry board voted to not rezone a parcel of land from the Residential Low Density classification to Highway Business as the first step in the process of constructing a new Dollar General location at a piece of property off U.S. Highway 52 South and St. Lukes Church Road.

Representatives for Teramore Development, a company that builds Dollar General stores, and the land-owning parties spoke in favor of the new retail location, citing it as a positive development for the people who live immediately around the store.

Two landowners who were part of the deal would have swapped parts of their property to change the shape the parcel  to form an access point that would please NCDOT.

Community members expressed concern about the additional traffic it could bring to the intersection, which would go from a three-way to a four-way. They also expressed concerns over safety issues, including the traffic congestion and how it would impact busy times in the area, specifically during school dismissal. The other concern was potential loitering at the site by students from nearby schools and if the store would attract more crime to nearby neighborhoods.

After the public hearing, the developer offered the concession to accept rezoning only 1.8 acres of the property to commercial, which would be the area needed to house the store. That’s compared to the total 10.161 acre parcel to be rezoned. The developer’s attorney, Nathan Duggins, proposed tabling the zoning decision until the next meeting to gather more information based on what had been discussed during the public hearing.

The vote to deny the rezoning of the property means the developer can not apply to rezone the property for another year.

In a 3-to-1 vote, Doug Shelton was the only alderman to vote against denying the rezoning request and he made a point of saying the town should consider being friendly to businesses that wants to come to Granite Quarry.