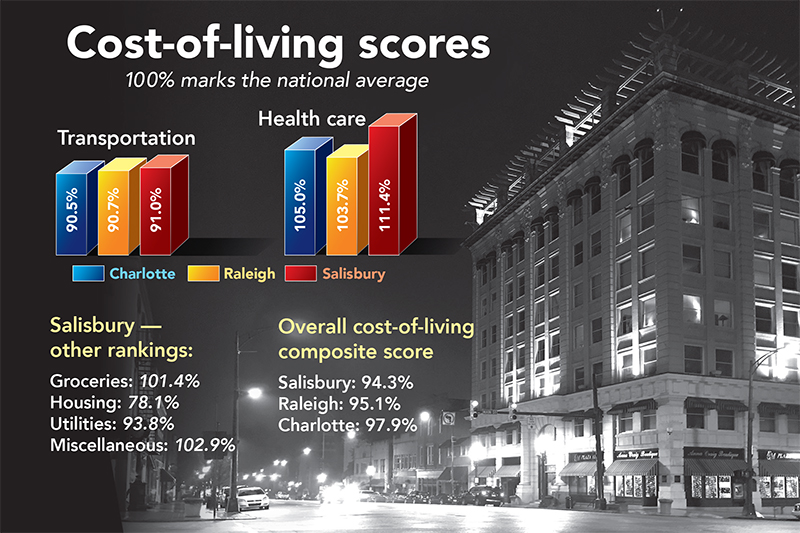 SALISBURY — While the city’s overall cost of living was 6% lower than the national average in 2019, costs like transportation and health care are more expensive locally than Charlotte and Raleigh.

Meanwhile, groceries in Salisbury were higher than the national average.

That data comes from the 2019 Cost of Living Index, compiled by students from Catawba College under the guidance of Catawba’s Ketner School of Business Dean Eric Hake. The project is a partnership with the Council for Community and Economic Research. The data is then submitted to the Salisbury-Rowan Economic Development Commission. The opportunity provides Catawba College students with a hands-on connection to course material.

“This is an experience in the real world of data collection, which is a boots-on-the-ground operation,” Hake said.

A score of 100 in each category means that the area ranked at the national average. Elaine Spalding, president of the Rowan County Chamber of Commerce, suggested equating the measurement to how much a consumer could get for $100.

She said Salisbury’s 94.3% ranking is a good thing for newcomers and major employers. Additionally, the low number serves as a useful tool for recruiting, which she cites as one of the biggest challenges in 2020.

While Salisbury’s grocery costs averaged higher than the national average and Raleigh, the cost looks similar to Charlotte. In the index, grocery costs were broken down to account for items such as meat, dairy, produce and bakery products as well as cooking oil, coffee, dishwashing powder, frozen foods and soft drinks.

For housing, the data included the monthly rent of a 950-square-foot, 2-bedroom unfurnished apartment with one-and-a-half or two bathrooms, water included. For homes, the data measured the cost of a 2,400-square-foot, 4-bedroom-and-2-bathroom home.

Transportation costs accounted for auto maintenance and gas. And health care gathered data on office visits, the cost of ibuprofen and prescription drugs.

While compiling data from grocery stores is relatively straightforward, Hake said, it’s more complicated for students to gather data from local businesses in categories like health care, where there is a greater variety of pricing for services. Additionally, some companies consider certain pricing data private.

This is the second quarter that the Catawba students as well as the Rowan-Salisbury Economic Development Commission and Chamber of Commerce have participated in the data gathering. Hake said the process had been conducted by state-level agencies.

And because of this relatively new project, President and CEO Rod Crider suggested not to look too critically at Salisbury’s grocery, transportation and health care costs compared to Charlotte and Raleigh.

“If we see an area that we’re less competitive in, we would want to talk to folks involved and see if they can help us determine the problem,” he said.

Spalding echoed the sentiment, saying the overall score matters more as some of the less expensive costs balance out the higher costs.

Manhattan, San Fransisco and Honolulu ranked among the overall most expensive cities. Harlingen and McAllen — both in Texas — and Kalamazoo, Michigan, were the three least expensive urban areas to live.