David Freeze: Robin and Isaac, on the way to better health 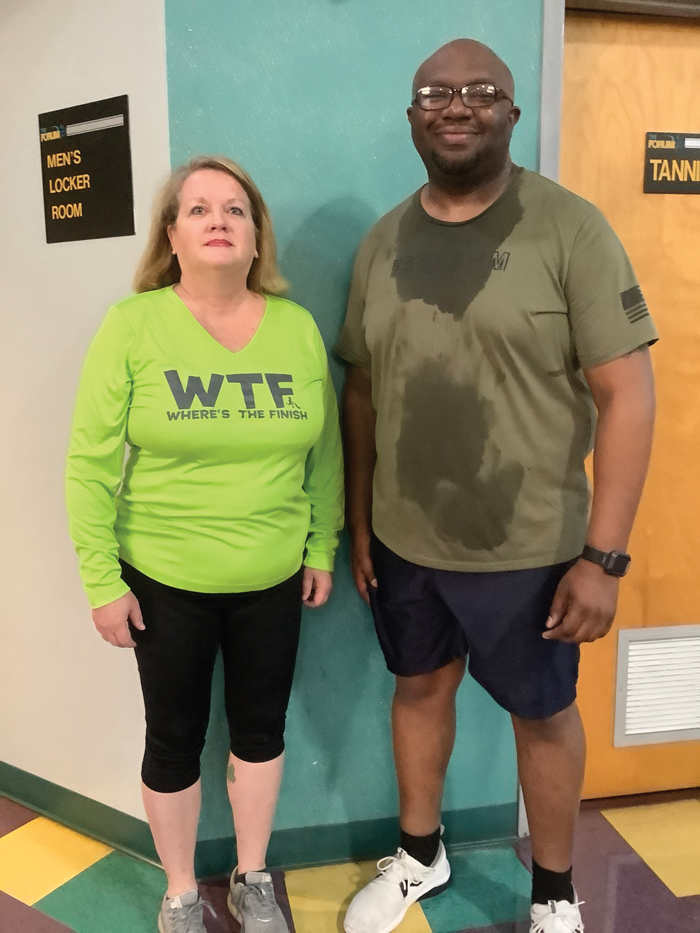 Robin Satterwhite and Isaac Miller are one month into their year long journey. Photo by David Freeze

We’re back at it again!

After Teri’s wonderful success in 2019, my hope is that you’ll soon see more of the same with Robin Satterwhite and Isaac Miller. They are two interesting candidates, both excited to take on the Salisbury Post Wellness Program. Readers will get monthly reports on their progress,

Robin Satterwhite is 55 years old and chairs the Humanities Department at Rowan Cabarrus Community College. She grew up in Murphy, NC, but has lived in Salisbury for almost 30 years now. Robin has two grown daughters and lives on a farm in western Rowan county with a dog and two cats.

Robin said, “I want to be the best I can be for the last half of my life. I also want to combat the crippling anxiety that has gotten worse with menopause. Another goal is to get off blood pressure medication and be healthy. Accountability has been missing in my past attempts at losing weight, getting healthy and feeling better overall. After starting many times, I have trouble carrying through. Knowing a personal trainer and a partner are expecting me on certain mornings at designated times keeps me focused. I can’t talk myself out of that! Also, working with someone who knows fitness and can provide efficient guidance makes me want to keep coming back.”

Isaac Miller is 37 years old and from the small town of Norwood, NC. He’s a police officer here in Salisbury.
Isaac said, “I’ve struggled to stay in shape and thought I needed motivation and accountability to keep me on track. Also, I really wanted to work out to lose weight but never truly knew how. I’m competitive, not with Robin, just with myself. If I see that I lost 3 pounds this week, I’ll want to lose 4 pounds next week, always striving to be better. Like most people, I look at what gets results and I’m drawn to it. With an organized program such as this, I do as instructed with great results so far.

We started the Post wellness program during the first week of January and have been at it since. Robin and Isaac meet with me twice a week and they exercise on their own at least four more days. Both are already making progress. Robin said, “Getting into a fitness routine gives me some structure. I have enjoyed getting to know Isaac and David and hearing different fitness stories. I have also enjoyed getting to know patrons and staff of the Forum and at the YMCA. Better sleep has helped the anxiety to wane.”

On the same page, Isaac added, “The best thing is how I’ve felt. My doctor asked me what have I been doing. Blood tests have shown great improvement in my testosterone and other areas. I feel better emotionally, physically and mentally while having more energy. There’s more clarity throughout my day after a good workout. My stressful job is easier to deal with since starting the program. Also, I enjoy having something to look forward to, especially Monday and Thursday mornings and catching up with Robin and David.”

Past readers know that we set both short term and long-term goals in this program. Robin said, “For February, I want to get better at counting calories while becoming more aware of better foods for my weight loss journey. I’m learning about the value of complex carbohydrates. I need to give up macaroni and cheese! I don’t have a problem with desserts, but I can ‘put a hurtin’ on some mac and cheese! I want to continue with step classes and maybe look for a kickboxing class plus improve my endurance.”

Isaac has similar thoughts. He said, “Goals for February include dropping ten more pounds. I want to kick the craving for sweets and sodas. I’ve only had two soft drinks in January, and expect to have none in February. I also want stop procrastinating, often waiting until the last minute to get my exercise.

Finally, we talked about a yearly goal. Robin said, “I would like to lose 50 pounds, get off blood pressure medication, and control my anxiety. I would like to be able to tie my shoes comfortably!”
Isaac added, “There are many parts of my body I haven’t been able to see for a while without the aid of a mirror. By the end of this year, I want to look down and see everything. Originally, I set my goal at losing 60 pounds but think I can lose 100 pounds. I started this year nearly 330 pounds, that’s a lot of man to carry around. With the aid of this program, I can surpass my goal.”

We did our final January weigh-in on Thursday morning. Robin has dropped three pounds and Isaac is down eight . We’re off to a nice start. See you at the end of February!