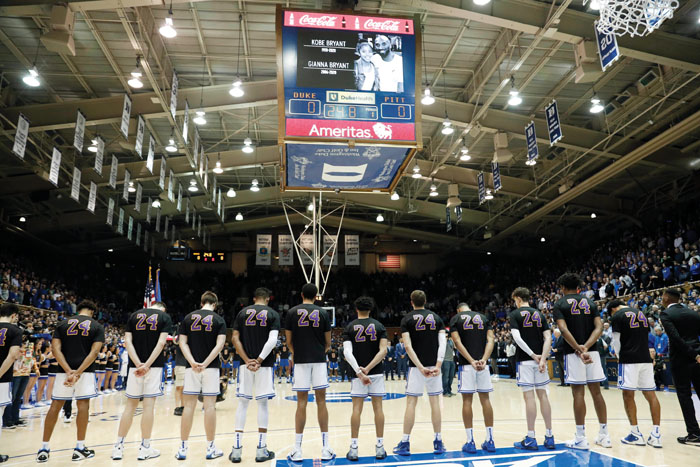 Duke players wear a Number 24 jersey during a moment of silence in memory of Kobe Bryant and his daughter Gianna Bryant prior to an NCAA college basketball game against Pittsburgh in Durham, N.C., Tuesday, Jan. 28, 2020. (AP Photo/Gerry Broome)

By KEN TYSIAC Associated Press
DURHAM (AP) — Vernon Carey Jr. had 26 points and 13 rebounds as No. 9 Duke beat Pittsburgh 79-67 on Tuesday night after both teams honored Kobe Bryant during a pregame ceremony at Cameron Indoor Stadium.
The somber opening gave way to a testy battle on the court that included an eruption by Duke coach Mike Krzyzewski — in the direction of his own fans.
The Hall of Fame coach was angered by the Cameron Crazies directing a playful chant at Pittsburgh coach Jeff Capel — a former Blue Devils player and assistant coach. Krzyzewski yelled at the fans to “Shut up!” and then came over across the court to scold them at the end of the first half.
Before tipoff, players for Duke and Pitt honored Bryant when they warmed up in T-shirts with purple and gold numerals 8 on the front and 24 on the back — the numbers Bryant wore with the Los Angeles Lakers. Bryant and his daughter Gianna were among nine people killed in a helicopter crash in Calabasas, California, on Sunday morning.
Bryant and Duke alumnus and former ACC Commissioner Gene Corrigan, who died Friday, were honored before the game. Krzyzewski, who coached Bryant as Team USA won Olympic gold medals in 2008 and 2012, stood stoically as his former player was honored.
Tre Jones contributed 14 points and Duncan Goldwire scored 13 as the Blue Devils (17-3, 6-2 Atlantic Coast Conference) won their second straight game after dropping consecutive decisions to Clemson and Louisville. Pitt (13-8, 4-6) was led by Au’Diese Toney’s game-high 27 points, but lost for the fourth time in six games.
The Blue Devils displayed balance on offense in the first half as they took advantage of the attention freshman center Carey attracted in the paint. Carey scored seven of Duke’s first nine points, forcing the normally stout Pittsburgh defense to collapse in on him in an effort to deny him the ball and contest his shots.
With Panthers defenders concentrating on Carey, Duke’s perimeter players capitalized on wide-open 3-point opportunities. By halftime, junior guard Goldwire had a career-high three 3-pointers as Duke was 7 for 14 from beyond the arc in the first half.
Pittsburgh mounted a furious rally in the second half, though, as Duke temporarily lost its scoring touch after leading 60-42. A 23-8 run sparked by Toney’s inside and outside scoring pulled the Panthers within 68-65 with 4:26 to play. But a pair of free throws by Matthew Hurt, a basket on the block by Carey and a 3-pointer by Stanley restored a double-digit lead for Duke.
BIG PICTURE
Pittsburgh: The Panthers are scrappy, and athletic and present challenges for opponents with their defense. A double-digit loss is no occasion for celebration, but Pitt can take pride in the way it competed in Capel’s homecoming, trailing by just three points late in the second half.
Duke: The Blue Devils’ accuracy from 3-point range in the first half was the most welcome development of the night. An intense man-to-man defense and the low-post scoring skills of Carey should give Duke a chance to win just about every game. If the rest of the cast can score from the perimeter, the Blue Devils can take their game to another level.
UP NEXT
Pittsburgh: Hosts Miami on Sunday.
Duke: Visits Syracuse on Saturday to start a three-game road swing.
___
More AP college basketball: https://apnews.com/Collegebasketball and https://twitter.com/AP_Top25