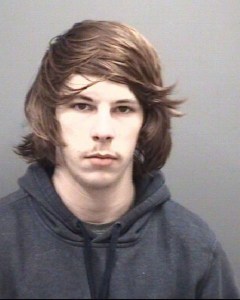 SALISBURY — A 20-year-old Salisbury man remains in the Rowan County jail after he seriously assaulted a woman with a 2-foot piece of wood, pointed a gun to her head and threw her into a ditch. Dylan Andrew Martin faces numerous felony and misdemeanor charges related to a Saturday incident at a Salisbury residence, according to several arrest warrants.

The woman, whom arrest warrants say was over the age of 16, was thrown to the ground and repeatedly kicked and struck in the head with a 2-foot by 3-inch piece of wood. Martin is also accused of slamming the woman’s foot in the car door in an attempt to make her stay in the car. An arrest warrant said Martin threatened to hang the woman by her neck and tried to pull her back into the home by her hair.

He allegedly told the woman, “I’ll kill you if you get me in trouble,” while pointing a pistol to her head. He also struck her in the face causing a black eye. When she tried to call 911, Martin is accused of slapping the phone from her hand.

According to an arrest warrant, the restraint charge came because Martin kept the woman from getting out of the passenger’s side of a vehicle. He also dragged her by the arm down the front stairs of the residence. He’s being held in the Rowan jail without bond due to the domestic nature of the incident.

In other arrest warrants

• Tyresse Lamil Hix, 28, whose address is listed as the streets of Salisbury, was charged on Sunday by Salisbury Police with misdemeanor child abuse and misdemeanor resist, obstruct, delay an officer. According to arrest warrants, Hix failed to provide a police officer with information so that she could conduct an investigation. Police were looking into an incident where he was supposed to be watching his young child and the child was outside in the cold at 8 a.m. with just a T-shirt and underwear by herself, the warrant said.

• Leigh Ashley Kristen Valentine, 30, of the 200 block of D Avenue, Apt. 5, was charged with misdemeanor larceny and issued a written promise. She and another person were arrested after they allegedly went into a Lexington and Salisbury Walmart and stole items from the store. The incident occurred on Dec. 16 through Dec. 23. She was accused of stealing a vacuum, a bicycle and two hoverboards from the Lexington Walmart located at 160 Lowes Blvd. The value of the items were $609.

• Terry Dewayne Mitchell, 48, of the 300 block of Moore Street, East Spencer, was charged with two counts of misdemeanor larceny, two counts of misdemeanor second-degree trespass. According to warrants, he stole two comforter sets, other bedding items, a Ninja blender, a Pioneer Woman cooking set, as well as 43 Bic Lighters from the Circle K in Spencer. Arrest warrants were issued by Lexington, Salisbury and Spencer police departments.

• Devin Achille Adair, 18, of the 6000 block of Autumn Gate Lane, Charlotte, is being held in the Rowan County jail after he was arrested Saturday for felony breaking and entering a motor vehicle, felony larceny, and three counts of misdemeanor larceny. Elkin Police are investigating the incident in which Adair is accused of taking a FedEx truck belonging to Hefner Enterprises Inc. in Hickory. He’s also accused of taking a Panasonic Toughbook Scanner valued at $1,000 and a Motorola cellphone and an equipment rifle case, as well as a Toshiba Soundbox and four boxes from Staples that belonged Bayada Home Health Care.

•  Joshua Michael Paxton, 40, of the 8900 block of East Franklin Avenue, Mount Pleasant, was charged with felony possession of methamphetamine, misdemeanor possession of drug paraphernalia by Kannapolis Police on Saturday. An arrest warrant said he also had a small red plastic bag. He also faces charges of driving while license revoked and no liability insurance.

• Matthew Tyler King, 19, of the 100 block of Josie Street, Rockwell, was charged by the Rowan County Sheriff’s Office on Saturday and is accused of being in possession of heroin, a pocketknife and hypodermic needle with fluid inside. He was charged with felony possession of a Schedule I controlled substance, misdemeanor carrying a concealed weapon and misdemeanor possession of drug paraphernalia. He remains in jail under a $3,500 secured bond.