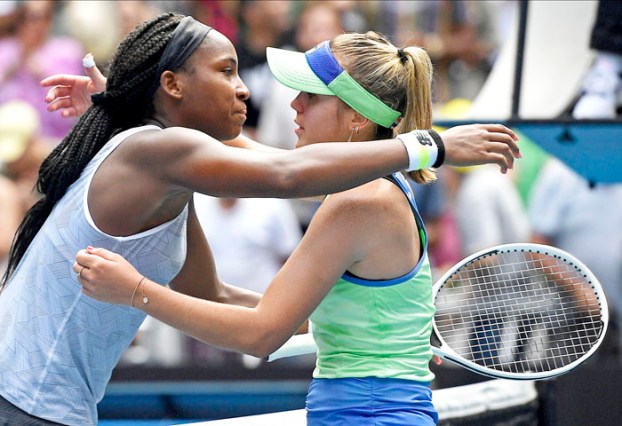 Sofia Kenin, right, of the U.S. is embraced by compatriot Coco Gauff after winning their fourth round singles match at the Australian Open tennis championship in Melbourne, Australia, Sunday, Jan. 26, 2020. (AP Photo/Andy Brownbill)

‘Didn’t do it for the hype’: Kenin stops Coco in Australia

MELBOURNE, Australia — It made sense to Sofia Kenin that Coco Gauff would be the one getting all of the attention and generating all of the buzz.
That’s only natural when Gauff is 15 and making tennis history time and time again.
“Yeah, I mean, the hype is for her. She’s obviously done great stuff, of course. It’s absolutely normal. Just (tried) not to let that get in my head,” Kenin said. “Of course, I didn’t do it for the hype. I did it for myself, because I wanted to prove to myself that I could do it.”
Well, Sofia, you did it. Now get ready for the spotlight to shine your way. Kenin stopped Gauff’s latest Grand Slam run by beating her 6-7 (5), 6-3, 6-0 in the Australian Open’s fourth round on Sunday.
Like Gauff, Kenin is a young — although, at 21, not quite as young — American and she reached her first major quarterfinal with the victory.
“I want to show who I am, show my best tennis, show why I’m there, why I belong,” the 14th-seeded Kenin said. “I’m doing that.”
In her previous match, the 67th-ranked Gauff beat Naomi Osaka to become the youngest player in the professional era to defeat the reigning women’s champion at the Australian Open. At Wimbledon last year, Gauff became the youngest qualifier ever at that tournament, beat Venus Williams in the first round and made it all the way to the fourth.
Entering Sunday, Gauff was 8-2 in Grand Slam action, with her only losses to women who have been ranked No. 1 and own multiple major titles: Halep (at Wimbledon) and Osaka (at the U.S. Open).
Hence the aforementioned hype.
“I couldn’t really write this,” Gauff said. “I don’t think anybody could really write how this past (several) months have gone.”
She did not play as well as she has been this time, though, winding up with 48 unforced errors, more than twice as many as Kenin’s 22.
Gauff’s power is impressive. One tiny indication: She slammed a forehand into the net so hard that it dislodged a piece of a sponsor’s white plastic sign.
Kenin can’t copy that.
But thanks to her relentless ball-tracking and a bit of in-your-face attitude with a racket in hand, Kenin surged up the WTA rankings from 52nd to 12th in 2019 while winning her first three tour-level singles titles plus a couple in doubles.
“She definitely put a lot of balls in the court,” Gauff said. “She’s quick.”
Just before Gauff announced herself last season, Kenin delivered her own breakthrough at the French Open by upsetting Serena Williams to get to the round of 16 at a major for the first time.
Now Kenin has taken another step.
Wasn’t easy, though.
After double-faulting twice in the tiebreaker to drop the opening set — “For sure, nerves,” Kenin acknowledged — she immediately tilted things the other way, breaking in the initial game of the second and never letting that lead slip away.
When it ended, appropriately enough, on a missed backhand by Gauff, Kenin dropped her racket at the baseline and covered her face as tears welled in her eyes.
“Anyone would get pretty emotional for the first time,” said Kenin, who next faces another woman making her Slam quarterfinal debut, 78th-ranked Ons Jabeur of Tunisia.
Jabeur was a 7-6 (4), 6-1 winner against 27th-seeded Wang Qiang, who surprised Serena Williams in the third round.
The wins for Kenin and Jabeur ended at about the same time, and the future opponents soon found each other cooling down side-by-side on exercise bicycles.
Kenin laughed as she described the scene this way: “She’s like, ‘Good job.’ I’m like, ‘You, too.’ It was fun, a funny moment. She’s like, ‘Are you feeling tired?’ ‘No, I’m good.’ She’s like, ‘Yeah, me, too.’ I’m like, ‘OK. I’ll see you on Tuesday, then.'”
Also advancing to a quarterfinal showdown were No. 1 Ash Barty — trying to become the first Australian to win the nation’s Grand Slam tournament since the 1970s — and last year’s runner-up in Melbourne, Petra Kvitova.
Reigning French Open champion Barty moved on with a 6-3, 1-6, 6-4 win against No. 18 Alison Riske of the United States, who double-faulted on the last point.
Kvitova, a two-time Wimbledon champion, was down a set and a break before coming back to defeat No. 22 Maria Sakkari 6-7 (4), 6-3, 6-2.
“I love Petra,” said Barty, who lost to Kvitova in Australia a year ago, “but let’s hope she doesn’t break my heart.”
In the men’s fourth round, defending champion Novak Djokovic moved into a matchup against No. 32 Milos Raonic, and Roger Federer overcame a slow start to beat Marton Fucsovics 4-6, 6-1, 6-2, 6-2 and his 15th quarterfinal in Australia, where he will face 100th-ranked Tennys Sandgren of the United States.
Raonic, the 2016 Wimbledon runner-up, was asked whether he thinks Djokovic, who owns 16 Grand Slam titles, eventually will catch Federer, who has 20.
“I just hope,” Raonic replied, “I can stop him at this one.”
Sandgren reached his second quarterfinal in Melbourne, reprising his 2018 feat by coming out on top in a physical, contentious encounter with No. 12 Fabio Fognini of Italy 7-6 (5), 7-5, 6-7 (2), 6-4.
Sandgren ended it with a marvelous drop volley to cap a 26-stroke exchange, then took a bow.
“I was expecting a fight,” Sandgren said. “And a fight we had.”
___
Follow Howard Fendrich on Twitter at http://twitter.com/HowardFendrich
___
More AP Tennis: https://www.apnews.com/apf-Tennis and https://twitter.com/AP_Sports