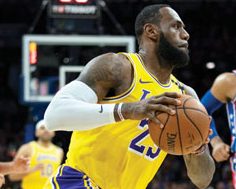 PHILADELPHIA (AP) — LeBron James moved past Kobe Bryant for third place on the NBA’s career scoring list, getting the milestone on a driving layup against the Philadelphia 76ers on Saturday night.

The Los Angeles Lakers star scored the basket with 7:23 left in the third quarter and he waved to a Sixers crowd that gave him a rousing standing ovation when the mark was announced by the public address announcer. The basket gave him 33,644 points.

James entered 18 points shy of passing Bryant on the list and couldn’t quite get there in the first half. He scored six points in the first quarter but had four turnovers that included an errant pass into the seats. He opened the second quarter with a layup, and then went to the free throw line for his next four points, giving him 12.

He finished the first half 3 for 7 from the floor, missed all three 3s, had five turnovers and three fouls for 14 points.

The 35-year-old James entered averaging at least 25 points (25.2 ppg) for the 16th straight season and has played 44 games this season. Kareem Abdul-Jabbar is the NBA’s career scoring leader with 38,387 points and Karl Malone is second at 36,928. James is on pace to pass Abdul-Jabbar in about three seasons.

James passed Bryant in Philadelphia, where the five-time champion was born. Bryant, who played his entire career with the Lakers, finished with 33,643 points. With a nod to Bryant’s nickname, James scribbled “Mamba 4 Life” on his Nikes against the 76ers.

James, who played in eight consecutive NBA Finals, has 6,911 postseason points with Cleveland and Miami that do not count in the official total. Five of the top six scorers in NBA history played for the Lakers, who signed James as a free agent in 2018.

“Just as a fan, you step back and just watch his body of work, no matter where he goes it’s off the chart unique. He does it with class,” 76ers coach Brett Brown said before the game. “Amongst all his success and the attention he receives on a daily basis, he doesn’t seem to blink. He’s got character, he lives right, he acts right, he’s arguably the greatest player to ever play our sport.”

DETROIT (AP) — Kyrie Irving took over, scoring on an array of shots and even over a backboard that was simply in his way.

Irving scored 17 of his 45 points in the third quarter to overcome a double-digit deficit and the Brooklyn Nets went on to beat the Detroit Pistons 121-111 in overtime Saturday night.

“It was about time,” Irving said.

The six-time All-Star played in his sixth game after a 26-game absence due to an injured right shoulder, which he was treating shortly after his sensational performance.

At one point during Irving’s scoring tear after halftime, he shot a floater over 6-foot-11 Andre Drummond and the backboard from the baseline.

“It just came down to execution and Kyrie having an out-of-body experience,” Drummond said. “When he’s knocking down shots like that, it is kind of tough to do anything against him.

Irving made free throws early in the extra period to put the Nets ahead and his assists helped them end a five-game losing streak.

The Nets went ahead 106-104 with 38.4 seconds left in regulation when Drummond was called for goaltending. Derrick Rose had an unforced turnover on the ensuing possession, then made up for it with a tying layup with 1.9 seconds left.

Irving missed a 3-pointer just before the buzzer, sending it to overtime.

“We worked really hard, but it came down to a couple possessions at the end of regulation,” Detroit coach Dwane Casey said. “I thought we ran out of gas a little in overtime.”

The Nets and Pistons are among many sub-.500 teams in the Eastern Conference, likely vying for the last two spots in the playoffs.

Rose had 27 points for Detroit, scoring more than 20 for the 12th straight game to extend his career high.

Drummond had a double-double in the first quarter and finished with 20 points and 21 rebounds. He has an NBA-high eight games with 20 or more points and rebounds and 40 in his career, tying Bob Lanier’s franchise record.

It was an impressive performance after missing two games for dental surgery.

“It was a tough week,” Drummond said. “I’ve got a fake tooth in there now and I’ve still got a lot of (dental) work left ahead of me.

Drummond had 11 points and 10 rebounds in the first quarter, which ended with the Nets ahead 26-25.

Irving was dominant in the third quarter, scoring eight consecutive points in the game and a total of 12 points in 2:02.

“Kyrie set the tone in the first two possessions the second half, he went to the rim, got fouled scored a layup,” Nets coach Kenny Atkinson said. “It loosened the defense up.”

Irving’s scoring surge helped the Nets go into the fourth quarter with an 80-77 lead.

“It definitely jump-started our team,” Dinwiddie said. “He really kicked into high gear and basically said we weren’t going to lose the game.”

Nets: Garrett Temple moved into the starting lineup, ending Dinwiddie’s streak of 32 straight starts. The move sets up Dinwiddie and Caris LeVert to provide the scoring off the bench. … DeAndre Jordan (finger) missed a fourth straight game and is day to day. … Timothé Luwawu-Cabarrot was signed to a second 10-day contract.

Pistons: Bruce Brown (illness) returned after missing the first two games. … Reggie Jackson (back) sat out as planned. He has not been cleared for back-to-back games. … Drummond scored 25 points to help Detroit beat the Nets 113-109 on Nov. 2 in previous meeting and the two teams will meet Wednesday night in Brooklyn.