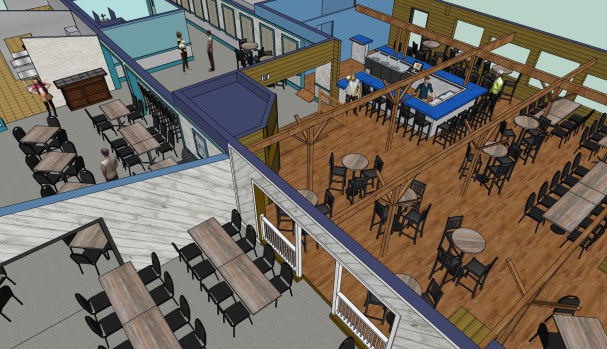 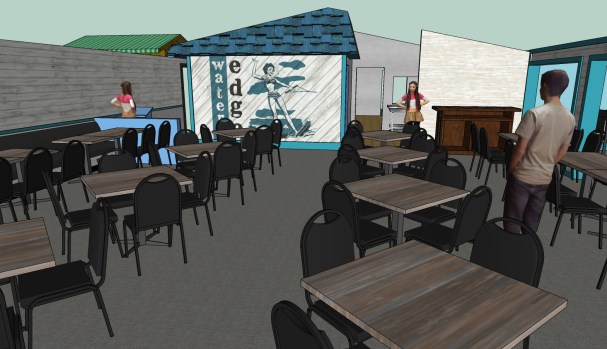 The restaurant will have 300 seats, both indoor and outdoor.

Renderings of Water's Edge, at 257 Boat Club Lane, which is set to open in March to be a destination in Rowan County's side of High Rock Lake.

HIGH ROCK LAKE — Downtown restaurant owners Mikey Wetzel and Todd Littleton both live out on the lake and want to make it a destination for others.

The duo has purchased the former High Rock Boat & Ski Club, at 257 Boat Club Lane, and are in the middle of renovating it into what will be known as Water’s Edge Dock and Grill. The pair say they got an opportunity last year they couldn’t turn down.

“We both dream big and work hard,” said Littleton, who grew up going to his grandfather’s place on High Rock Lake and moved there in 2006.

Wetzel, meanwhile, says the High Rock Boat & Ski Club was “killing it” years ago, but has struggled of late. Littleton said there were times his friends would boat over to the club to find it closed at 10:30 p.m. on a weekend.

“We really just wanted to a nice place to go,” Littleton said.

For a year or so, people asked the two: “Why don’t you buy the place?” They declined until November.

Water’s Edge Dock and Grill is targeting March to open. Littleton said they are putting in 60-70 hour weeks of work, with blood, sweat and, yes, tears involved.

Initially, the plan for Wetzel and Littleton was to keep the club going and close it to do some “sprucing up.” But it was an old building that had seen add-ons over the years and didn’t meet Wetzel and Littleton’s higher standards as restaurant owners. They didn’t feel comfortable just opening it. Instead, they decided to give the future restaurant a heavy face lift to remove all the years or wear and tear.

Water’s Edge Dock and Grill has the capability to seat 300 customers, both inside and outside. The restaurant will be open seven days a week, similar to Wetzel’s Go Burrito and Littleton’s City Tavern. It will be open for lunch and dinner. On weekends, it will serve a brunch with a Bloody Mary bar.

The restaurant will offer Americana-type food with some seafood offerings. Wetzel said the menu is not finalized yet, but it will be higher-quality food like City Tavern — not a fry kitchen like it previously was. The sky is the limit with the menu, Wetzel said.

The bar will also be updated with 16 draft beer options, wine and signature cocktails.

Littleton said he wants to reintroduce nightlife to High Rock Lake and create a place to hang out by the water and enjoy music.

“There’s something about being by the water that calms your soul,” Littleton said.

Wetzel and Littleton also want to take advantage of the 12-acre property. The pair say the site could offer a large amount of entertainment, with concerts, corn hole or volleyball tournaments, boat shows and car shows. Wetzel said the pair wants to have an event every weekend so that customers can visit Water’s Edge Dock and Grill and expect something to be happening.

“We’re going to take all the aspects of the property and improve on it and make it a destination,” Wetzel said.

In the longer term, Wetzel and Littleton plan to add a waterfront bar with limited food service, more piers for boats and boat gas. Wetzel said there is a possibility they will dredge the area since the water level is low around the restaurant.

But the pair’s goals aren’t just limited to Water’s Edge Dock and Grill. Littleton said he wants all of High Rock Lake to be a destination. They hope to navigate the waters and show others that economic success is possible at High Rock Lake and in Rowan County.

High Rock Lake has been an underutilized asset of the county, Wetzel said. The “Welcome to Rowan County” sign should say “Home of High Rock Lake.”

He looks at Lake Norman as a place to which people will drive from Rowan County for an experience. High Rock Lake could be that, Wetzel said.

Water’s Edge will be an 8-mile drive from downtown Salisbury and easily assessable from Interstate 85. Wetzel said county leadership is starting to see what asset High Rock Lake is for Rowan County.

“Water’s Edge is going to be a key part of promoting High Rock Lake,” Wetzel said.