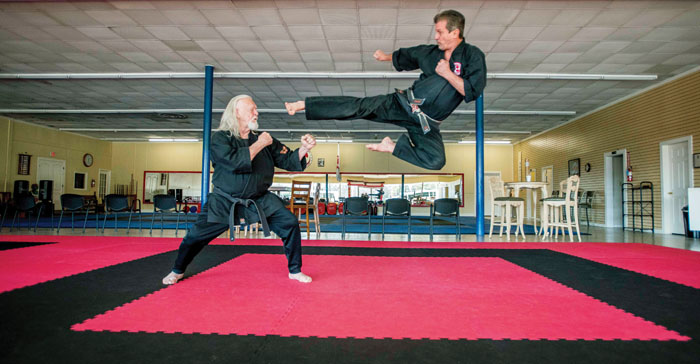 SALISBURY — When the Tomoe Warrior Test was administered to Sidekick Karate students on Saturday, the founder of the American Open Karate System was on hand to help and to make a special presentation.

Sidekick Karate, at 520 South Main St., was founded by the Smith brothers, Ricky and Randy, who have 48 years of training in the American Open Karate System. The pair opened their first karate school and began teaching in 1996. Testing continued from 10 a.m. to 7 p.m., with younger students first up and the more advanced levels later in the day. Participating were 75 students and 10 instructors throughout the day. Also included in the weekend celebration was the presentation of a certificate signifying that founder Jerry Piddington has passed on the American Open Karate System that he developed to the Smiths and Dan McCall.

Piddington was an early, long-time instructor for the Smiths, meeting with them in Charlotte and China Grove four times per week from 1972-1976 before the pair opened the Salisbury studio. Named ‘The Gold Dust Twins” by Karate Illustrated Magazine, Ricky and Randy were two of the top-ranked fighters in the world and were crowned tag-team world kickboxing champions in 1977.  They were inducted into the World Martial Arts Hall of Fame in 1994 as instructors of the year and are both ninth-degree black belts.

“My dad told us that he was going to find the best instructor for his boys, and he did. Hanshi is the best,” Ricky said. “His presence on the mat is where I want to be. We will keep utilizing and revising the movements, tactics and strategies that Hanshi began.”

Piddington, now 76, said, “It took a long time to collect the signatures of the best instructors in all of karate to sign off on my transfer. Chuck Norris and many more have signed the certificate that I will be passing on to Ricky, Randy and Dan. I have moved the American Open Karate System forward for decades and now it will be their job to keep it going for many more.”

Ricky laughed when he recalled early training with Piddington, saying “that is where I learned to pray, praying that Hanshi wouldn’t show up. Now I want to be able to accomplish just a portion of what he has done by the time I am 76.”

At every teaching session in the Sidekick dojo, students bow to the Hanshi, Ricky and Randy’s dad, Gene (to honor parents and grandparents) and then face the American flag. They teach Kati, a set pattern of form that was judged in the Tomoe, a continuous movement which helps to overcome fear.

Kati symbolizes discipline and commitment. The Tomoe award is given to students who have a warrior spirit.  The Tomoe is the symbol of the fighting spirit of Okinawan warriors who defended their homes and families in time of war.

“Kids matter. They make a commitment to discipline and focus in an effort to acquire power and speed,” Ricky said. “Randy and I learned to fight early but now we want to help these kids with much bigger things. If I could get them on the mat, I have never had a kid that I couldn’t train. Parents and grandparents are often surprised with the success we have. I’m not going to give up.”

Concerning the certificate and the responsibility to move the American Open Karate System forward, Ricky added, “It is a symbol of a lifetime of commitment to martial arts. All the world’s best have blessed what has been passed on to us and expresses their belief that we can continue Hanshi’s progress.”

Now addressed as “Kyoshi” in his new role, Ricky smiled, “The name means pure on the inside. I want to keep doing this. Our kids today need it. Focus, commitment and discipline. With continued success, that is what I want to leave behind with them.”

The Tomoe Warrior Test on Saturday was open to the public. A celebration was held Monday night at the end of each class with recognition and certificates. Tomoe patches and Hanshi’s Special Patch were awarded on Saturday.