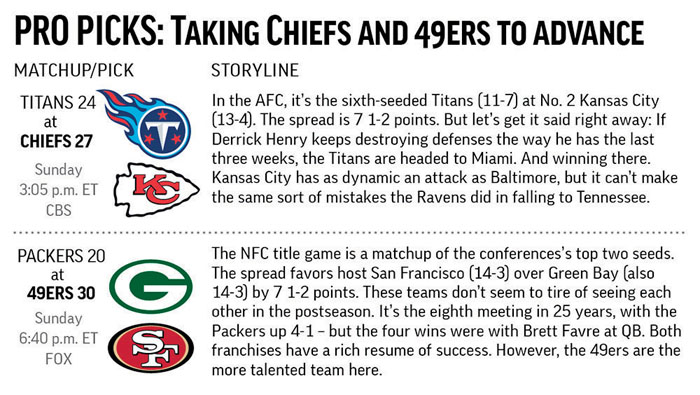 By BARRY WILNER AP Pro Football Writer
Pro Picks is surprised.
Consider that the NFC title game is a matchup of the conferences’s top two seeds. The spread favors host San Francisco (14-3) over Green Bay (also 14-3) by 7 1-2 points.
In the AFC, it’s the sixth-seeded Titans (11-7) at No. 2 Kansas City (13-4), which would seem to be more of a mismatch. Yet the spread is also 7 1-2.
There’s plenty of history surrounding the potential Super Bowl opponents. Should the Packers and Chiefs get there, it will be a rematch of the very first AFL-NFL Championship Game — it’s official title back in 1967.
Should the 49ers get in, they will be seeking their sixth Super Bowl crown. Pittsburgh and New England lead with six.
The Titans are the only one of the four clubs not to walk off with a Lombardi Trophy. Indeed, they’ve only been to the big game in 2000, losing to “The Greatest Show on Turf” in one of the most exciting finishes the Super Bowl has seen.
Overall, it’s been 50 years since Kansas City got there, beating heavily favored Minnesota.
NFC
These teams don’t seem to tire of seeing each other in the postseason. It’s the eighth meeting in 25 years, with the Packers up 4-1 — but the four wins were with Brett Favre at quarterback.
Both franchises have a rich resume of success.
“I think it helps with the age I’m in, I was born in ’79, so I remember the Niners throughout the ’80s growing up and I was here with my dad in ’94 where they won that Super Bowl,” 49ers coach Kyle Shanahan says, referring to his father, Mike. “I think just being around it, I knew exactly how special it was.
“You know, (we’ve) been a few down years, I think since ’12 or whenever it was, but that does happen, too. We knew we had to build this up and get back here, but we knew how good of an organization it was, and when you do have a good organization, usually those tough times don’t last. If you can just stay the course and be a little bit patient.”
Patience is not a major part of the Niners’ current personality. In fact, the Packers with their running game built on the work of Aaron Jones, are the more patient team.
They are not, however, the more talented team.
BEST BET: 49ERS, 30-20
AFC
Let’s get it said right away: If Derrick Henry keeps destroying defenses the way he has the past three weeks, the Titans are headed to Miami. And winning there.
Henry not only will be the focal point for Tennessee’s offense, but also for Kansas City’s improved defense. Yeah, we know the Chiefs didn’t show much on D in the first quarter last week against Houston, but this is their best unit on that side of the ball under Andy Reid.
That defense must slow down Henry, get the Titans off the field and Patrick Mahomes onto it. Kansas City has as dynamic an attack as Baltimore, but it can’t make the same sort of mistakes the Ravens did in falling to Tennessee.
“I think they’re playing confident, aggressive football,” Reid says. “I felt that way when we played them, too.”
Tennessee beat Kansas City in late November in Nashville.
”They’ve had this opportunity now to play a few more games since we played them. They were playing good then, they’re playing good now.”
Good enough to knock off the Chiefs? Not quite, but it will be tight.
CHIEFS, 27-24
___
2019 RECORD:
Last Week: 2-2 against spread, 3-1 straight up.
Season Totals: 137-121-5 against spread, 156-105-1 straight up.
Best Bet: 12-7 against spread, 15-4 straight up.
Upset special: 8-10 against spread, 8-10 straight up.
___
More AP NFL: https://apnews.com/NFL and https://twitter.com/AP_NFL