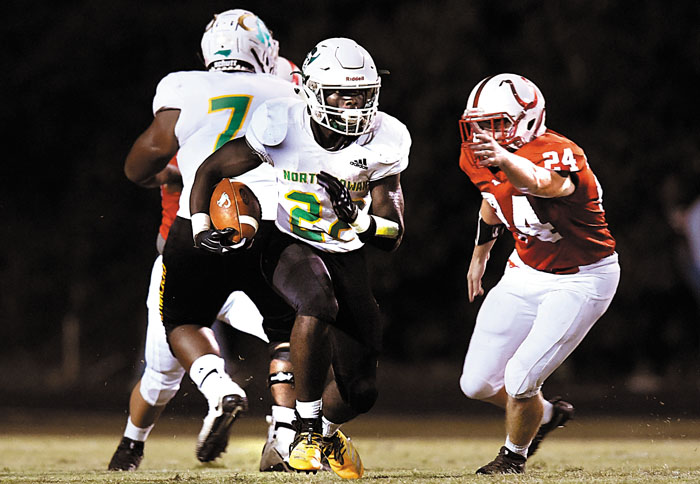 Wayne Hinshaw FILE PHOTO/for the Salisbury Post ... North Rowan’s Malcolm Wilson (22), center, picks up yardage during a game against East Rowan, on Sept. 20. Wilson is the Post’s co-Offensive Player of the Year.

Wilson’s 2019 numbers — 213 carries, 1,678 rushing yards, 7.9 yards per carry — tell part of the story. He’s only the seventh player in county history to top 4,000 career rushing yards. He tied the school record this season with 31 touchdowns and scored 54 in his career.

“He was it, he was our guy,” North head coach Ben Hampton said. “As Malcolm went, we went, and he went pretty often.”

Running backs dominated the offensive stats in Rowan County. Player of the year cases also could be made for West senior Jalen Houston (the co-winner), East junior Sammy Pinckney, who had 1,830 rushing yards, even with his team falling short of the playoffs, and  Salisbury junior Mike McLean, who was at his best during Salisbury’s biggest victories. McLean had 361 of his 1,522 rushing yards against Ledford (177) and top-seeded Randleman (184).

Wilson enjoyed a tremendous junior season, breaking out, taking everyone by surprise, after spending his sophomore season as the second part of a 1-2 punch with Jaleel Webster. After adding pounds and strength, Wilson piled up 1,820 rushing yards in 12 games. He received the Yadkin Valley Conference Offensive Player of the Year accolade as well as Rowan County honors.

But North had a much different team in 2019, a less experienced team, especially on offense. Wilson was a marked man for every defense, and he struggled to find running room during North’s 0-3 start.

“We did start slow for a lot of reasons,” Wilson said. “It took a while for us to get it. But then we got (center) Kendall Reid back on the offensive line, and Kyree Sims started to progress at quarterback. Once you start completing passes, those holes start opening up for the running game.”

North put together a nine-game winning streak. North didn’t lose between Sept. 6 and the third-round 1AA playoff setback to Taboro on Nov. 29.

“We started looking pretty good by the middle of the season,” Wilson said.

The next week at East Rowan was one of the pivotal games of North’s 9-4 year. East was in control most of the game, but Wilson transformed a screen pass  into a game-swinging, 77-yard touchdown.

The other benchmark game in North’s regular season was a YYC struggle at fired-up Albemarle. The Cavs were favored by a lot, but they found themselves down by 11, 33-22, with five minutes left. North rallied for an improbable victory, with Wilson scoring the winning touchdown with 40 seconds left.

“We had a good team bond,” Wilson said. “Guys kept their heads up at Albemarle, and we overcame a lot of obstacles.”

North Rowan secured the YVC crown with a decisive 34-8 victory against defending champ North Stanly. That was a defense geared up to stop Wilson, but he accounted for 176 rushing yards and three touchdowns.

In the Cavaliers’ games against lesser YVC opponents, Wilson dominated the way a player of the year is supposed to dominate.

He broke school and county records in the Chatham Central game. He ran back the opening kickoff for a touchdown and had six rushing TDs. He had four scores by the end of the first quarter. He finished with a school-record 318 yards on only 11 carries.

“That many yards on 11 carries was mind-blowing,” Wilson said. “Games like that you go into it with the mindset of making the whole team tackle you before you go down. You try to take every carry to the house.”

He had a similar game against a decent South Stanly team. He scored six touchdowns. He had a receiving touchdown to start the scoring, and three of his five rushing touchdowns were long ones.

Trailing 14-0, North looked to be in trouble, but then Wilson broke an 85-yard touchdown run. Wilson was hit at the North 15, at the 20, and at the 25, but he broke tackles and worked his way to daylight. Then he suddenly was out-sprinting defenders for a game-turning touchdown.

“Malcolm is one of those kids who improved every year,” Hampton said. “He’s very talented, but he’s also very well prepared for every game and a kid with great character. We’re not looking forward to trying to replace him next year, but we’re excited that he’s being recruited by a lot of people. He’s going to make someone happy on Saturdays.”

Wilson’s career ended at Tarboro, but even in a lopsided loss, the highlight film shows him barreling back to middle field with kickoffs and crashing through talented tacklers.

“Tarboro was something,” Wilson said. “They’re so big and so physical. And it looked like their whole defense ran a 4.5. But we did our best. It was a really good season.”

Wilson leaves as the owner of two of the top 20 county rushing seasons in Rowan history. He topped 100 rushing yards in 18 games and had over 200 rushing yards seven times. He scored 67 touchdowns.

Quite a legacy. Quite a player.