Williams out as Livingstone’s football coach 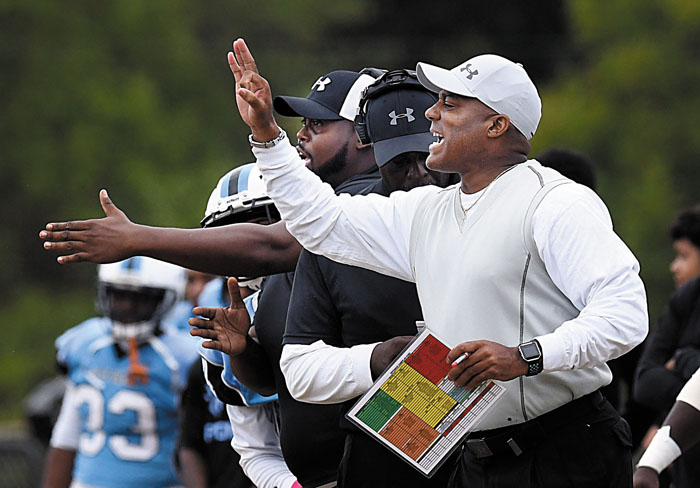 Livingstone head coach Daryl Williams, right, shown last Oct. 5, during a game against Virginia Union. The college acknowledged on Wednesday evening that Williams will not return as coach, after seven seasons. ... File photo by Wayne Hinshaw, for the Salisbury Post

Williams, head football coach since 2013, covering seven seasons, is out, although no formal announcement was made by the school.

On Livingstone’s athletic website, Williams is no longer listed among the coaches and staff. He was reached Wednesday morning by telephone in his hometown of Memphis, Tenn.

“I am confirming that Coach Williams is no longer with us at Livingstone and we’re in the process of selecting a new head coach,” said Massie-Sampson. “We’re looking for that great fit for our program. The football program is in great hands and we have a plan for the transition.  Whoever is selected will get the keys to the program and take it in the right direction.”

Recruiting duties and day-to-day football operations are being handled by “our staff,” according to Massie-Sampson.

Williams was guarded in his comments, stating that he is still under contract through June.

“I’m in Memphis, I’m not there,” said Williams. “I haven’t been there since early December. But I have not had a conversation with the president (Dr. Jimmy R. Jenkins Sr.) or the athletic director. I have spoken with human resources.”

During Williams’ tenure as head coach, the Blue Bears went 22-46, including 4-6 last season. That’s an average of just three wins per year.

LC’s best season under Williams was in 2015, with four-year starting quarterback Drew Powell at the helm. The Blue Bears were 5-4 and in CIAA Southern Division first-place contention until late in the season. That campaign was also Livingstone’s first non-losing season in 17 years.

Williams came to Livingstone from Texas Southern University, where he had been associate head coach and quarterbacks coach.

From 2001-2007, Williams was at Alabama State, serving as co-offensive coordinator, recruiting coordinator and director of football operations. During Williams’ time there, ASU won three SWAC Eastern Division championships and one SWAC title. Under Williams, the Hornets’ offense led the SWAC in total offense.

Williams earned his bachelor’s degree in physical education and recreation from Tennessee State University, where he played quarterback, in 1996. Williams was named MVP at the 1993 Southern Heritage Classic and was selected to the All-Ohio Valley Conference team.

Williams obtained his master’s degree in counseling from Alabama State in 2004. Also in 2004, Williams interned with the Tennessee Titans of the NFL.

“I always tried to do right by the program,” Williams said on Wednesday, of his time at Livingstone. “I tried to be a guy who treated the kids right, get the graduation rate up and do the right thing.”