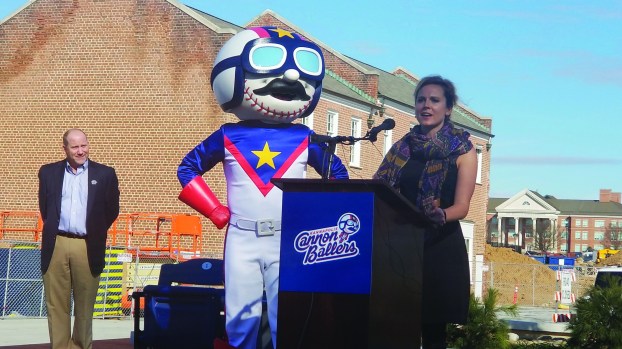 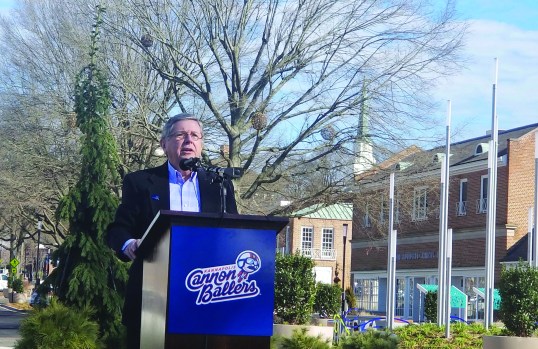 KANNAPOLIS – Fans asked, and they got their answer on Wednesday.

The name for the well-mustachioed mascot for the newly renamed Kannapolis Cannon Ballers is henceforth “Boomer.”

The team made the reveal at an event outside its new offices and store in downtown Kannapolis. The reveal, the result of a public poll, was the main event, but the team also cut the ribbon on its offices.

The team has had several rebrandings over the years. Its last incarnation as The Intimidators were named for Kannapolis native and NASCAR legend Dale Earnhardt. The mascot, Boomer, rocks Earnhardt’s signature mustache.

Alicia Amling, the director of Ballers owner Temerity Baseball, made the name reveal.

“This guy, I think all of you can agree, is our favorite newest resident in Kannapolis,” Amling said.

Amling said some of the names were very creative, bolder than the team was ready for and others that did not make much sense. Ultimately Amling said there was one name that just made sense.

“Who’s this daredevil? Who’s this guy that is bold, he’s brave, he hits home runs out of the park every day right?” Amling said.

When Amling asked the crowd what the mascot could be called, a few people in the crowd shouted “Dale,” followed by a wave of “Boomer.”

Millward said there are more milestones ahead for the team. Different packages, community efforts and naming rights for the ballpark are all coming up.

Construction on the new stadium for the team is coming along, with more pieces going up like the outfield padding and video board. Temerity Baseball Operating Partner Scotty Brown said the final light pole was installed in the new stadium last week.

Kannapolis Mayor Darrell Hinnant commented on the success of the team’s rebranding, saying he was told the team has sold more merchandise in the past 30 days as the Cannon Ballers than the past three years and that the new park is intended to bring people to the city from elsewhere.

“This is really your park, and this is your sports entertainment venue,” Hinnant said, adding the city wants something that will be an attraction to bring people downtown.

Part of the event also was dedicated to discussing the partnership the Cannon Ballers has with Windstream Kinetic to provide internet access at the new park. The private club venue, which is part of the new park, will be colloquially referred to as the Kinetic Club and intended to be used as a rentable venue that can be used for business conferences, wedding receptions and the like.

Row K in the stadium will be the “Kinetic Row,” and anyone sitting there during a game will have a chance to win a prize from Kinetic. At one point during the presentation, a Cannon Baller jersey was unbuttoned to reveal the logo for the Kinetic Club.