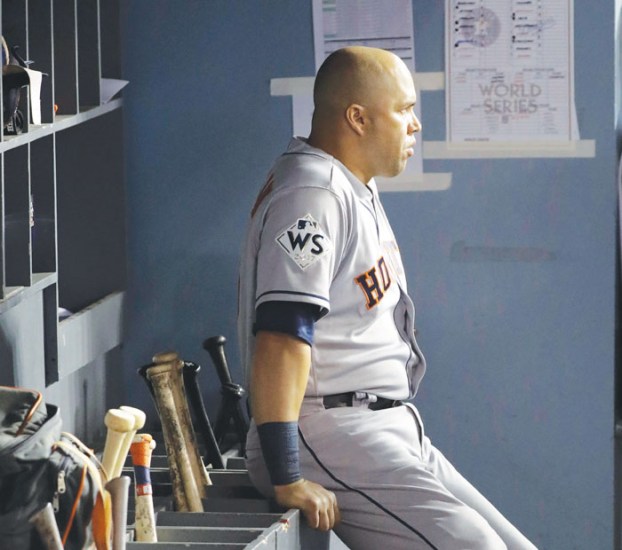 FILE - In this Oct. 24, 2017, file photo, then-Houston Astros' Carlos Beltran waits in the dugout during the sixth inning of Game 1 of baseball's World Series against the Los Angeles Dodgers, in Los Angeles. Beltran is out as manager of the New York Mets. The team announced the move Thursday, Jan. 16, 2020. (AP Photo/David J. Phillip, File)

So for the second time since they last threw a pitch, the New York Mets are in the market for a new manager.

Beltrán’s 2 1/2-month tenure as Mets manager ended Thursday before he spent a single game on the bench, the latest fallout from the Houston Astros’ sign-stealing scandal that has rocked Major League Baseball.

The Mets announced the decision in a news release, saying Beltrán and the team “agreed to mutually part ways.” The move came two days after Boston cut ties with manager Alex Cora, who was Houston’s bench coach in 2017 when Beltrán played for the Astros.

A day before that, manager AJ Hinch and general manager Jeff Luhnow were fired by Houston soon after they were suspended for the 2020 season by Commissioner Rob Manfred for their roles in the cheating scheme.

Next to fall was Beltrán, the only Astros player mentioned by name Monday when MLB issued its findings from an investigation into the club’s conduct. No players were disciplined, but the nine-page report said Beltrán was among the group involved in the team’s illicit use of electronics to pilfer signs during Houston’s run to the 2017 World Series championship.

“Over my 20 years in the game, I’ve always taken pride in being a leader and doing things the right way, and in this situation, I failed,” Beltran said in a statement issued through agent Dan Lozano.

“As a veteran player on the team, I should’ve recognized the severity of the issue and truly regret the actions that were taken. I am a man of faith and integrity and what took place did not demonstrate those characteristics that are so very important to me and my family. I’m very sorry. It’s not who I am as a father, a husband, a teammate and as an educator. … I hope that at some point in time, I’ll have the opportunity to return to this game that I love so much.”

“Considering the circumstances, it became clear to all parties that it was not in anyone’s best interest for Carlos to move forward as manager of the New York Mets,” Van Wagenen and Wilpon said in a statement.

“We believe that Carlos was honest and forthcoming with us. We are confident that this will not be the final chapter in his baseball career.”

On a later conference call, Wilpon said the team had heard in advance “from sources” that Beltrán wasn’t going to be suspended by MLB.

“I think the change was when the report did come out, how prominent he was in it,” Wilpon said.

The commissioner’s office did not pressure the Mets to fire Beltrán, Wilpon said, telling executives it was the club’s decision.

“This has been a difficult week. Make no mistake, it’s been difficult for everyone involved,” Van Wagenen said.

“When we met with Carlos, we had to make an assessment of, where do we go from here? And in Carlos’ thought process as well as ours, we both agreed that it was going to be incredibly challenging and incredibly difficult to do the job in a way in which he intended and the way in which he could utilize the best of his abilities.”

The Mets said they will consider a number of internal and external candidates to be their next manager, and they hope to choose one soon.

With spring training less than a month away, there isn’t much time to pick a successor. Options could include new bench coach Hensley Meulens and ESPN analyst Eduardo Pérez, who interviewed for the job last fall.

The 42-year-old Beltrán, with no managerial experience, was hired to replace Mickey Callaway as Mets skipper on Nov. 1. The former New York slugger was given a three-year contract with a club option for 2023 and introduced three days later during a news conference at Citi Field.

“I’m grateful to them for giving me the opportunity, but we agreed this decision is in the best interest of the team,” Beltrán said in the Mets’ statement. “I couldn’t let myself be a distraction for the team.”

Beltrán becomes the first manager to be let go without managing a game since Wally Backman, who was hired by Arizona in November 2004 and fired four days later after legal and financial problems were revealed.

The Mets are one of 10 teams to change managers since opening day last year — and now they are doing it twice.

When they hired Beltrán last fall, Van Wagenen said: “We can trust Carlos, and that goes a long way.”

Beltrán played the last of his 20 big league seasons with the Astros in 2017. Manfred said that year Cora was “an active participant” and developed the sign-stealing system used by the team, strongly hinting he will face severe penalties. Even though Cora was subsequently let go, the Red Sox remain under investigation for stealing signs during Cora’s first season as manager in 2018, when they won the World Series.

In a Nov. 12 report by The Athletic, ex-Astros pitcher Mike Fiers, now with Oakland, went public with allegations that Houston players used a camera to steal signs in 2017. The report said Beltrán played a “key role in devising” the scheme.

That prompted baseball’s investigation, which found the Astros used a video feed from center field to see and decode the opposing catcher’s signs. Players banged on a trash can to signal batters what kind of pitch was coming, believing it would improve their chances of getting a hit.

Beltrán told the New York Post in a text message he was “not aware of that camera.” He told The Athletic the Astros “took a lot of pride” in studying pitchers via computer before games but insisted “that is the only technology that I use.” He said he didn’t consider his actions cheating.

At the general managers’ meetings that week, Van Wagenen sounded confident the probe wouldn’t affect Beltrán’s status with the Mets.

“Anything that happened, happened for another organization with Houston,” Van Wagenen said then. “At this point, I don’t see any reason why this is a Mets situation.”

There have been further rumblings that Astros players wore small, electronic buzzers under their uniforms that tipped them off to certain pitches.

“MLB explored wearable devices during the investigation but found no evidence to substantiate it,” the commissioner’s office said in a statement Thursday.