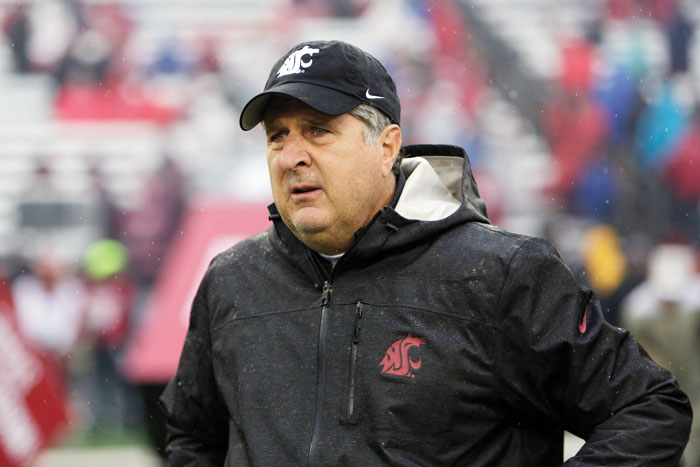 FILE - In this Oct. 19, 2019, file photo, Washington State head coach Mike Leach walks onto the field before an NCAA college football game against Colorado, in Pullman, Wash. Two people with knowledge of the decision says Mississippi State has hired Washington State's Mike Leach as its new head coach. The people spoke to The Associated Press on condition of anonymity Thursday, Jan. 9, 2020, because the school has not yet officially announced the move. Leach will replace Joe Moorhead, who was fired last week after two seasons. (AP Photo/Young Kwak, File)

The pirate is heading to Starkvegas.

Mississippi State hired Washington State’s Mike Leach as its new head coach Thursday, bringing one of the nation’s quirkiest and most successful coaches from the Pac-12 to the Southeastern Conference.

College football in the state of Mississippi has gotten a lot more interesting over the last month, with Leach joining new Ole Miss coach Lane Kiffin.

“Welcome to the state old pirate and friend!!” Kiffin tweeted.

The post-bowl game firing by Mississippi State was unusual, but the Bulldogs now have a coach with a long track record of winning at programs that have historically struggled. In 18 years at Texas Tech and Washington State, Leach is 139-90, using his Air Raid offense to set records and consistently reach the postseason.

At Washington State, Leach took over a program that had been mired in the Pac-12 basement and went to five straight bowl games, including a school-record 11 victories in 2018.

He finished 55-47 in eight seasons with the Cougars. He produced a similar turnaround at Texas Tech, taking the Red Raiders to bowl games in all 10 seasons.

His style is anything but typical. Leach gets a lot of attention for his news conferences, where he has been known to dole out wedding advice, once pondered which Pac-12 mascots would survive a fight and told tales about his passion for pirates. He taught a class at Washington State last year about football and combat.

It has not all been fun and games, though.

Leach was fired by Texas Tech after being accused of mistreating a player, Adam Jones — the son of former ESPN announcer and NFL player Craig James — who had suffered a concussion. He then clashed with his bosses, and sued Texas Tech for wrongful termination. The school was protected by state law, but Leach is still trying to fight that case. He also filed a lawsuit against ESPN and Craig James that was later dismissed.

When his teams have struggled, his news conferences have been far less amusing. Leach has not been shy about calling players soft and making other disparaging remarks.

But on the field, his teams win more than they lose and his quarterbacks typically throw for more yards than just about anyone else. Washington State has led the nation in passing four times since 2014 and never finished worse than third over the period.

Leach, who has drawn interest from SEC schools before, including Tennessee a couple of times, is one of the godfathers of the modern passing game. He helped develop the Air Raid offense at Division II Valdosta State and Kentucky under Hal Mumme.

Leach brought that wide-open style to the Big 12 when he was hired by Bob Stoops to be offensive coordinator at Oklahoma in 1999. The next year, he landed in Lubbock, Texas. The Red Raiders had been mired in mediocrity for years, but under Leach never finished below .500 and had nine straight seasons with at least eight victories.

After the acrimonious end of his tenure at Texas Tech, he was out of coaching for two years before being hired by Washington State, another program that had been languishing. The Cougars won only 12 games in his first three seasons, but went 43-22 from 2016-19.

Washington State finished 6-7 this season, including a seventh straight loss to rival Washington. While Leach was regularly able to beat Pac-12 North rivals Stanford and Oregon at Wazzu, his only victory in the Apple Cup was in the first one he coached.

Mississippi State also went 6-7 this season under Moorhead, but that wasn’t enough for the former Penn State offensive coordinator who was hired after Dan Mullen left for Florida in 2017.

MAYS TRANSFERS TO TENNESSEE AFTER HIS FATHER SUES GEORGIA

Offensive lineman Cade Mays is leaving Georgia and returning to his hometown to continue his college football career at Tennessee, where he will have an opportunity to play alongside his younger brother.

Tennessee announced  Thursday that it had added Mays, who has spent the last two seasons at Georgia. Tennessee sent out a tweet with the Knoxville Catholic graduate’s picture along with the message, “Welcome #HomeSweetHome, Cade!”

“As a guy with multiple years of starting experience on the offensive line in the SEC, Cade is a tremendous addition to our program,” Tennessee coach Jeremy Pruitt said in a statement.

Mays’ attorney said the offensive lineman will have a strong case to be granted immediate eligibility in 2020.

Tom Mars, whose sports law practice has offices in Atlanta and Rogers, Arkansas, accused Georgia of leaking news that Mays’ parents, Kevin and Melinda Mays, filed a lawsuit against the University of Georgia in December. The lawsuit was filed in the State Court of Clarke County about two years after an incident in which Kevin Mays lost part of his little finger after it was caught in a folding chair at a dinner for recruits at Sanford Stadium.

Kevin Mays was a team captain at Tennessee and an All-Southeastern Conference guard in 1994.

“The Mays family has never said a word to anyone about Kevin Mays’ lawsuit,” Mars said in an email to The Associated Press on Thursday. “The timing of the news stories about Mr. Mays’ lawsuit makes clear that UGA leaked this story to sports writers today after Cade delivered a letter to (coach) Kirby Smart late yesterday explaining the reason he’s leaving Kirby’s program.”

Added Mars: “I suppose I shouldn’t be surprised that UGA is continuing to take the low road about the lawsuit, but directing sports writers to Mr. Mays’ lawsuit set a new record low for UGA athletics.”

Spokesman Claude Felton released a statement Thursday from the Georgia athletic association, which denied leaking news of the lawsuit.

“Unlike Mr. Mars, we will not engage in a public discussion of a student eligibility matter, other than to wish the best for Cade and his family,” the statement said. “Although the Mays lawsuit is a public document available on the internet, no one at UGA was authorized to discuss it, we’re not aware of anyone who did so, and the reporter who broke the story of the lawsuit has stated that he was not notified by anyone at UGA.”

The lawsuit was first reported by UGAsports.com. The website’s reporter, Anthony Dasher, told The Associated Press he was not informed of the lawsuit by anyone from Georgia.

Georgia has had three offensive linemen — left tackle Andrew Thomas, right tackle Isaiah Wilson and guard Solomon Kindley — announce they will leave school early and enter the NFL draft. Mays’ exit is another blow to the position’s outlook for 2020.

With Thomas sitting out, Mays (6-foot-6, 318 pounds) started at left tackle in Georgia’s Sugar Bowl victory over Baylor. Mays played in all 14 games, starting 11, for Georgia (12-2) and would have been a key contributor to the line next season. He also started at both guard positions and right tackle and has played at center.

“Of all the waiver cases I’ve been involved in, I’ve never seen anything quite like this one,” Mars said. “And for the sake of everyone who loves college football, I hope I don’t ever see another one.”

Mars did not provide details of Mays’ reasons for seeking the transfer.

Mays verbally committed to Tennessee as a high school student. He backed off that commitment in the fall of 2017, when Tennessee was in the midst of a 4-8 season that resulted in the firing of coach Butch Jones.

If Cade Mays gets a waiver enabling him to play for Tennessee in 2020, it would represent the latest boost for an offensive line that already is enjoying a pleasant offseason. All-SEC guard Trey Smith announced Thursday he was returning to school for his senior season rather than entering the draft, and center Brandon Kennedy has indicated he’s been granted a sixth year of eligibility.

Tennessee’s offense received even more good news Thursday when  former Southern California wide receiver Velus Jones Jr. tweeted that he’s joining the Vols as a graduate transfer. Jones had six receptions for 35 yards in 2019 after catching 24 passes for 266 yards and a touchdown in 2018.