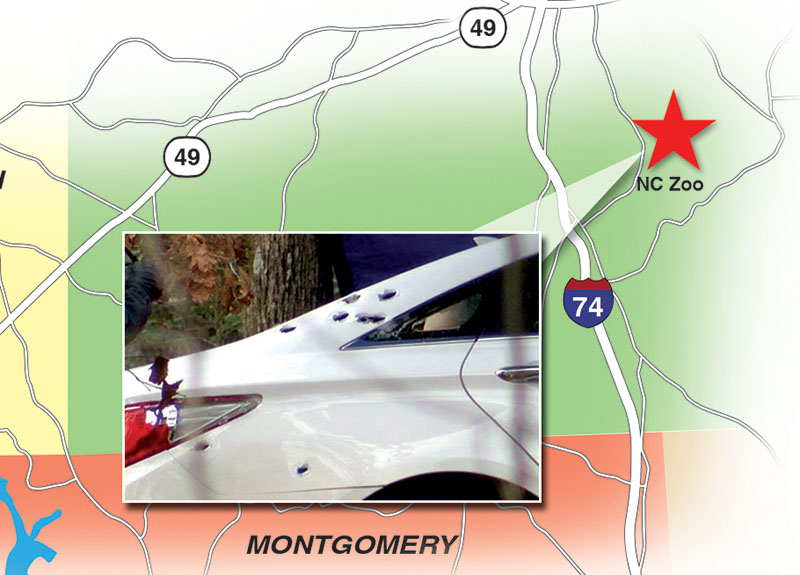 SALISBURY — A Rockwell man involved in an attempted robbery of a taxi driver Monday was fatally shot Tuesday after leading law enforcement officers on a multi-county chase, according to the Rowan and Randolph sheriff’s offices.

Troy Chase Caster, 21, of Phaniels Church Road, was shot by a law enforcement officer late Tuesday morning near the North Carolina Zoo and died at the scene.

The Rowan County Sheriff’s Office began investigating Caster Monday after a female driver with Carolina Taxi told officers he tried to rob her shortly after 5 p.m. at Arcadia Road and Rogers Road, near China Grove, said Capt. John Sifford. The driver said she picked up a white male customer on Rock Hill Church Road, in Concord, and drove him to the Arcadia Road location. Authorities said that male was later identified as Caster.

The driver reportedly told Caster how much he owed, and he demanded the driver’s money. When the taxi driver looked back at the suspect, he pointed a pink handgun at her face and pulled the trigger, but the gun didn’t fire, the woman told law enforcement.

The taxi driver began fighting to control the gun, according to the Rowan County Sheriff’s Office. Caster was able to fire the gun, but the bullet passed by the taxi driver and damaged the vehicle’s window. Caster reportedly got out of the car and began walking around to the driver’s side, pointing the gun at the woman. The taxi driver then sped away, leaving the suspect standing in the roadway.

Caster was also sought by Salisbury police for larceny of a firearm, reportedly the pink handgun he used in the robbery, Sifford said. Salisbury Police obtained warrants for Caster’s arrest but had been unable to locate him, Sifford said.

On Dec. 11, Caster applied for a pistol purchase permit and was denied the permit by the Sheriff’s Office.

Because of the taxi driver incident, Rowan County sheriff’s deputies obtained felony warrants for Caster for attempted armed robbery and assault with a deadly weapon with intent to kill. The Sheriff’s Office searched for Caster Monday night and went to to several locations in an attempt to find him, Sifford said.

At about 5:30 a.m. Tuesday, Rowan deputies spotted Caster near his residence on Phaniels Church Road. Deputies attempted to perform a traffic stop on the suspect, but he failed to stop and sped away, Sifford said.

Rowan deputies pursued the suspect into Rockwell and onto U.S. 52, toward Stanly County. Caster reached speeds of over 100 mph as the chase continued and entered into Stanly County, Sifford said. The chase continued into Davidson County and then into Randolph County, where N.C. Highway Patrol troopers joined the chase along with units from the Randolph County Sheriff’s Office.

Sifford said Rowan County Sheriff’s Office units allowed the Highway Patrol and Randolph County Sheriff’s units to take the lead in the chase as the suspect slowed his speeds below 100 mph.

During the chase, the Randolph County Sheriff’s Office said, Caster fired shots at pursuing deputies and proceeded toward the Africa entrance at the North Carolina Zoo.

The Randolph Sheriff’s Office said deputies “forcibly ended” the chase on a gravel road behind the North Carolina Zoo, where shots were fired and Caster was fatally shot. It was unclear on Tuesday who shot and killed Caster.

None of the law enforcement officers involved were injured. Randolph County Sheriff and N.C. SBI are investigating the officer-involved shooting.