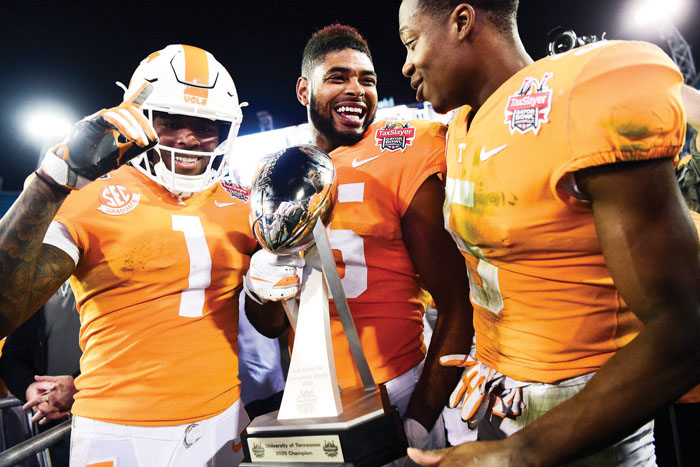 By MARK LONG AP Sports Writer
JACKSONVILLE, Fla. (AP) — Tennessee sure knows how to get out of a huge hole.
The Volunteers scored twice in a 30-second span late, using an onside kick to help escape a 13-point deficit, and then held on to stun Indiana 23-22 in the Gator Bowl on Thursday night.
The rally was indicative of Tennessee’s season, which started 1-4 and ended with six consecutive wins.
“Everybody in the country had given up on these guys,” second-year coach Jeremy Pruitt said.
Pruitt was talking about the season. He could have been talking about the game.
The Hoosiers (8-5) looked to be in control in the second half after scoring two touchdowns in a 1:03 span, the second one coming on Jamar Johnson’s 63-yard interception return, and later adding a pair of field goals.
Indiana was up 22-9 before Tennessee (8-5) shocked most of the nearly 62,000 fans on hand.
Quavaris Crouch scored on a 1-yard plunge and then fellow running back Eric Gray recovered a surprise onside kick that barely went the mandatory 10 yards. Gray scored from 16 yards out a few plays later to put the Vols on top for good.
“Obviously, very very disappointing to have a fourth-quarter lead and let it slip away,” said Indiana coach Tom Allen, whose team was seeking its first nine-win season since 1967. “I’m not going to sit here and point fingers and blame. At the end of the day, it’s my responsibility for us to find a way to win the game. We didn’t do that.”
Gray was named the game’s Most Valuable Player.
“It’s amazing,” he said. “When adversity hits, you got to put on more steam.”
Logan Justus missed an extra point in the third quarter that turned out to be costly and was wide right on a 52-yard field goal attempt with 2:12 remaining. Justus’ kick had the distance but sailed just outside the right upright.
Tennessee punted with 1:02 remaining, but Indiana failed to get back into field goal range.
THE TAKEAWAY
Indiana: The Hoosiers have to find a replacement for offensive coordinator Kalen DeBoer, who stayed for the bowl game after getting the head coaching job at Fresno State. DeBoer gets much of the credit for Indiana’s offensive turnaround.
Tennessee: Jarrett Guarantano is far from guaranteed to be the team’s starting quarterback next season, especially after a two-interception performance. The Vols signed Harrison Bailey from Marietta (Ga.) High, and the incoming freshman is expected to enroll this month and compete for the job in spring practice.
JENNINGS PLAYS
Tennessee receiver Jauan Jennings, who was suspended for the first half for stepping on an opponent in the regular-season finale, had to wait until the fourth quarter to touch the ball. Jennings had receptions of 22 and 5 yards, setting up the first of the two late touchdowns.
ODD CALLS
Allen had a game-management issue that might have cost his team points.
The Hoosiers moved the ball to the 6-yard line in the waning seconds of the first half, but instead of calling timeout, Allen had Peyton Ramsey line up and spike the ball with 3 seconds remaining. They could have used their final timeout much earlier, taken a shot into the end zone and still had time for a field goal.
KEY INJURIES
Indiana played its second consecutive game without leading rusher Stevie Scott. Scott warmed up with teammates, but did not play. … Tennessee linebacker Daniel Bituli injured his right eye in the third quarter, returned on the next series and could be seen covering it with his hand to get calls from the sideline. … Indiana tight end Peyton Hendershot injured his right short on a tackle but later returned.
SPURRIER BOOED
Tennessee fans showed no love for former Florida coach Steve Spurrier.
The Head Ball Coach was one of several coaches and players on hand for the 75th edition of the Gator Bowl. All of them played or coached in the bowl and were recognized on the field shortly before kickoff.
The list included former Tennessee coach and current Vols athletic director Phillip Fulmer, Pro Football Hall of Fame running back Floyd Little, Ole Miss great Archie Manning, former Tennessee quarterback Joshua Dobbs and longtime Tennessee AD Doug Dickey, who played and coached at Florida.
Dobbs got the loudest ovation.
Spurrier was roundly booed, hardly a surprise given he went 8-4 against Tennessee as Florida’s coach (1990-2001) and had famous lines like: “You can’t spell Citrus without U-T.”
UP NEXT
Indiana: Injured quarterback Michael Penix and several other offensive starters return next season, which begins with Indian’s toughest road opener since playing at then-No. 7 Notre Dame in 1991. The Hoosiers open at Wisconsin on Sept. 5.
Tennessee: The Vols will have to replace five key starters: receivers Jennings and Marquez Callaway, linebackers Darrell Taylor and Bituli, and safety Nigel Warrior. Junior guard Trey Smith could leave early for the NFL. Tennessee opens next season against Charlotte on Sept. 5 and plays at Oklahoma the following week.
___
More AP college football: https://apnews.com/Collegefootball and https://twitter.com/AP_Top25

•••
BIRMINGHAM BOWL
NO. 23 CINCINNATI 38, BOSTON COLLEGE 6
BIRMINGHAM, Ala. (AP) — Desmond Ridder ran for 105 yards and three touchdowns and threw a scoring pass to lead Cincinnati past Boston College in the lightning-delayed Birmingham Bowl.
The Bearcats (11-3) reached 11 wins for the second straight season and fourth in program history, bouncing back from two straight losses to No. 15 Memphis. The Eagles (6-7) were outgained 459-164 in total yards to finish a turbulent postseason.
Coach Steve Addazio was fired after seven seasons and star tailback A.J. Dillon declared for the NFL draft and skipped the bowl game.
Dillon was clearly missed. Wide receivers coach Rich Gunnell led the team through the bowl game, while newly hired Jeff Hafley was on hand as a spectator after finishing his duties as Ohio State’s co-defensive coordinator.
The game was interrupted by a weather delay of about 1 1/2 hours midway through the first quarter.