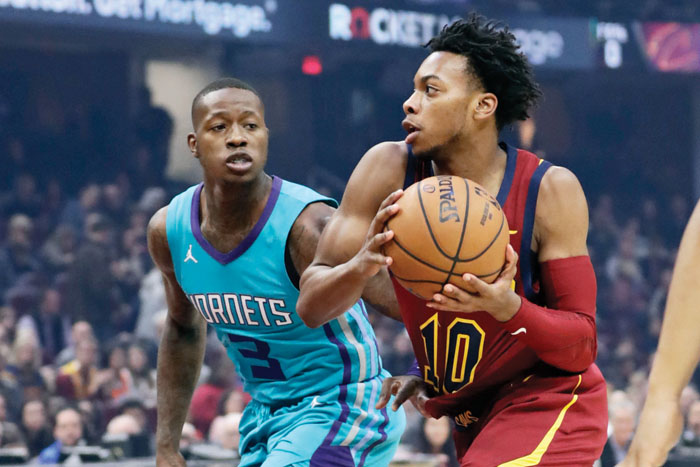 CLEVELAND (AP) — Devonte’ Graham hit a 3-pointer with 26 seconds left to break a tie and cap Charlotte’s late rally in the Hornets’ 109-106 victory over the Cleveland Cavaliers on Thursday night.

Graham’s shot from the top of the key gave Charlotte a 106-103 lead. The Hornets came back from a nine-point deficit with five minutes to play to end a six-game losing streak, helped by a controversial call.

Although it appeared that the ball wasn’t touched by a Cleveland player, the officials ruled Charlotte maintained possession despite protests by Cavaliers coach John Beilien and his players.

Terry Rozier hit a foul shot with 3.6 seconds left and Collin Sexton’s 3-pointer from just inside halfcourt bounced off the rim.

Rozier led the Hornets with 30 points. Graham had 16 — all in the second half.

Cleveland led 100-91 with 5:31 to play before Charlotte rallied. Sexton scored 21 points, and Kevin Love had 18 for Cleveland.

Hornets: F Marvin Williams left the game in the second half with what was announced as “nasal trauma.” … Graham and starting forward Miles Bridges were held scoreless in the first half. … G Nicolas Batum missed his fourth straight game as a result of a coach’s decision..

Cavaliers: G Dante Exum, appearing in his fourth game since being acquired on Dec. 23, scored seven points in 12 minutes. He was picked up from Utah for G Jordan Clarkson. … Cleveland opened a four-game homestand.

Hornets: At Dallas on Saturday.