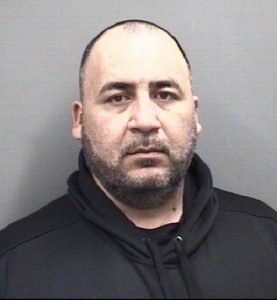 A Baltimore man who was arrested in the February joint drug arrest operation called Operation Tarheel Gauntlet has been convicted and sentenced to four years in federal prison, according to the Rowan County Sheriff’s Office.

The four-day operation on Interstate 85 by the Rowan and Iredell County sheriff’s offices drug interdiction team led to the arrest Octavio Lizarraga Ayala, 40, and three others. Ayala stopped in the southbound lane near mile marker 73 was stopped because he was following too close.

When the officer stopped the black Nissan, there was a package with gray duct tape and bubble wrap. The package was a plastic container with a lid that contained a strong odor of ammonia and a black granulated substance initially believed to be coffee grounds. According to Capt. John Sifford, the substance was actually black pepper and was being used to mask the odor of the drugs inside the container. The container held a brown crystal-like substance that field-tested positive for methamphetamine.

Ayala was originally charged with two counts of trafficking in methamphetamine (Level III), possession of drug paraphernalia, and maintaining a vehicle for keeping and selling controlled substances. He was held on a $520,000 secured bond.

On Dec. 6, 2019, Ayala pleaded guilty in the U.S. District Court Middle District of North Carolina to one count of possession with intent to distribute methamphetamine. The order was signed by a judge on Dec. 20, 2019.

It will be another rainy, foggy day, but the high should reach the 60s. The chance of rain is 90... read more