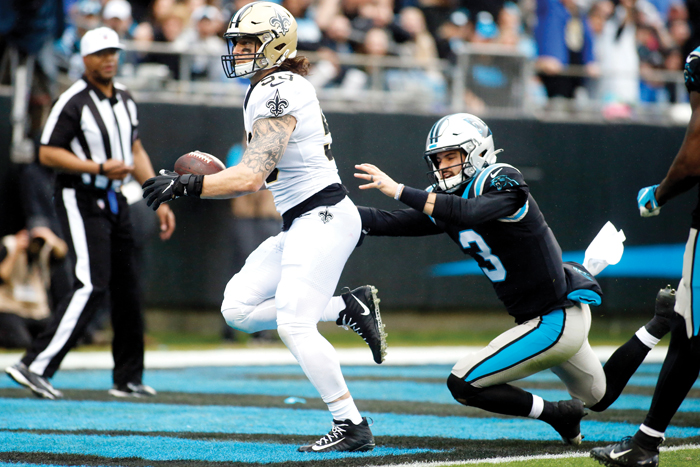 New Orleans Saints outside linebacker A.J. Klein (53) scores after an interception on Carolina Panthers quarterback Will Grier (3) during the first half of an NFL football game in Charlotte, N.C., Sunday, Dec. 29, 2019. (AP Photo/Brian Blanco)

CHARLOTTE (AP) — Even if the 13-3 New Orleans Saints don’t get a first-round bye, coach Sean Payton likes his team’s chances in the playoffs.
The Saints took care of business against the reeling Carolina Panthers on Sunday with a dominant 42-10 win, but they need the Seahawks to beat the 49ers on Sunday night to get a week of rest.
“It’s hard to play this game if you’re not emotionally and physically ready,” said Payton, who played his starters until late in the third quarter. “There are times when seeding has been established, and we’ve sat players. That’s a different picture. From the minute we got here, we handled it right. Our pregame was on point.”
Drew Brees threw for 253 yards and three touchdowns, Alvin Kamara ran for two scores and A.J. Klein returned an interception for a touchdown as the Saints handed the Panthers their eighth straight loss.
The Saints watched the end of the Packers-Lions game on TV in the visitors’ locker room. Green Bay’s last-second win ended New Orleans’ chance of earning home-field advantage throughout the NFC playoffs. A win by the 49ers would make the Saints the No. 3 seed, meaning New Orleans would host the Minnesota Vikings in the wild-card round next weekend.
“You always want to be in a position where you control your own destiny,” Brees said. “We’ve positioned ourselves to where, hopefully, there’s a chance we can get a first-round bye. But if not, we’re preparing for wherever we’re going to play.”
Brees said the most important thing is that the Saints are clicking as they enter the postseason.
“When you look at the stretch of the past five or six weeks, the emphasis is how do we get better? How do we improve? How do we get ourselves in the best form going into the playoffs?” Brees said.
The only thing that went right for the Panthers (5-11) was Christian McCaffrey joining Roger Craig and Marshall Faulk as the third player in NFL history to record 1,000 yards rushing and 1,000 yards receiving in the same season. McCaffrey needed 67 yards receiving coming in and got there with a 17-yard reception late in the third quarter, earning some bear hugs from teammates on the sideline and a standing ovation from the scattered fans remaining in the seats.
“Every year I write down little goals and it is cool when you accomplish one of them,” McCaffrey said. “But once again, and I can’t reiterate this enough, that the most important statistic is winning.”
McCaffrey finished the season with 2,392 yards from scrimmage, third most in NFL history. He left the game late in the third quarter following his 19th touchdown of the season.
Any suspense about the outcome of the game ended much earlier.
The Saints took the opening kickoff and drove 75 yards on eight plays to take a 7-0 lead on Kamara’s 15-yard touchdown run. Kamara added a second TD run later in the quarter, and Klein made it a three-touchdown lead when he picked off rookie quarterback Will Grier and returned it 14 yards for a TD early in the second quarter.
Brees added TD passes of 1 yard to Tre’Quan Smith and 21 yards to Jared Cook to make it 35-0 in the second quarter, prompting Panthers interim coach Perry Fewell to remove perennial Pro Bowl linebacker Luke Kuechly from the game to prevent injury.
“There are four quarters in a season and we didn’t finish the last eight games very strong, which is disappointing for the players, for the coaches, for the fans, for the organization,” said Fewell, who went 0-4 as Carolina’s interim coach.

GRIER INJURED
Grier left the game in the second quarter with a foot injury, finishing his second NFL start with a 0.0 quarterback rating on 1 of 8 passing for 4 yards. He was replaced by Kyle Allen. The Panthers provided no update on the extent of the injury after the game.

OLSEN’S FINAL GAME?
This might have been the final game for Panthers tight end Greg Olsen, who has one year left on his contract but could be a casualty of a rebuilding effort.

FIXING DEFENSE
One area the Panthers will need to address in the offseason is their run defense.
Carolina surrendered 31 touchdowns rushing this season, which tied for the most since the NFL-AFL merger. Carolina came into the game ranked 31st in the league in rushing defense, in part because of injuries to defensive tackles Kawann Short and Dontari Poe.
“It’s about shedding blocks, getting off blocks, whipping the guy in front of you and tackling,” Fewell said. “And we didn’t do that very well.”

IN MEMORIAM
The Panthers held a moment of silence before the game to honor the memory of Carly McCord, who died in a plane crash on Saturday in Lafayette, Louisiana. McCord had served as an in-game reporter for the Saints.
She was on a small plane en route to Atlanta for the College Football Playoff game between LSU and Oklahoma. Her father-in-law is Steve Ensminger, LSU’s offensive coordinator.

UP NEXT
Panthers: Will make a decision on their next head coach in the coming weeks. Ron Rivera was fired with four games left in the season. Former Packers coach Mike McCarthy and Baylor coach Matt Rhule are candidates along with Fewell, but the Panthers are expected to interview several assistant coaches still in the playoff hunt.
Saints: Advance to the NFC playoffs for the third straight season.
___
More AP NFL: https://apnews.com/NFL and https://twitter.com/AP_NFL