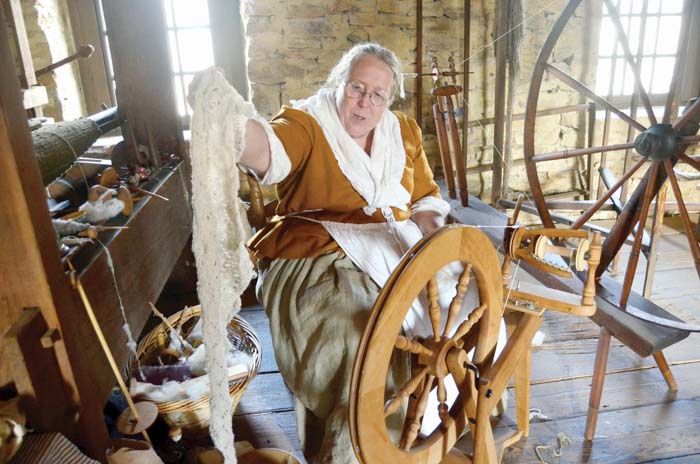 Nancy Gaines shows off a shawl she made using a spining wheel. She was on hand Saturday to demonstrate to those gathered at the Old Stone House Christmas event how to spin flax and wool. She also has a collection of homemade spinning tools. Shavonne Walker/Salisbury Post

SALISBURY — Traci Neal and her family were looking for something to do on Saturday and the Old Christmas at the Michael Braun Haus was the perfect event, in part, because her husband, Larry, is the historical site manager for Reed Gold Mine and a history buff.

It was the Rowan County couple’s first time attending the event, but certainly not their first time exploring the community’s history.

“History has always been important to me,” said Larry, who’s been a war re-enactor.

A Wilmington transplant, Larry has lived in Rowan County for 20 years. He’d always knew about the site and event, but never had the opportunity to attend.

This is the 35th year for the annual holiday event that celebrates German Christmas traditions that would have been here between 1750 and 1800, said Rowan Museum Executive Director Aaron Kepley. The event is an opportunity for people in the community to come together as they would’ve done in the 18th and 19th centuries during holiday gatherings, Kepley said.

The Old Stone House was decorated Saturday as it would have been during the pre-Revolutionary era, with simple and natural greenery, dried flowers, herbs, fruits and berries.

Frankie Raymer and his wife, Franda, said they love history and have attended the event for several years. Frankie is a descendant of the Braun family. The couple, along with their daughter, have attended many of the other events hosted at the Old Stone House.

Of the activities at the event, Franda said she enjoys the vinegar chicken and the other samples offered.

Nancy Gaines, who learned to use a spinning wheel through workshops and fiber guilds, volunteered to show those in attendance how to spin flax and wool. She became interested after her grandmother taught her how to crochet at 9 years old and then knit. She also participates at the Carolina Renaissance Festival — where they process wool.

“I started doing it because I enjoy it,” she said about spinning.

Ben Starnes was first introduced to the Old Stone House as a participant in the historical camps on site when he was in third grade. He’s now a sophomore at West Rowan High and recently discovered his ancestors fought in the Civil War. After learning of his family’s role in a Rowan County regiment, Starnes became more interested in history.

“I enjoy it. I’m interested in the time period. I want to learn more about them and teach others,” Starnes said.

Those who attend or attended the event, which continues today, will be taken on tours of the historic house and experience the life of a colonial family’s Christmas celebration in Rowan County during this time period.

The Mecklenburg Militia were on hand Saturday, firing muskets and skirmishing. There was also open fire cooking, with soup, bread and cookie samples as well as music, children’s games and more.

The event continues today from 12 p.m. to 4 p.m. The cost for the event is $5 for adults and $3 for students. Old Stone House is located at 770 Old Stone House Road, Salisbury, near Granite Quarry.