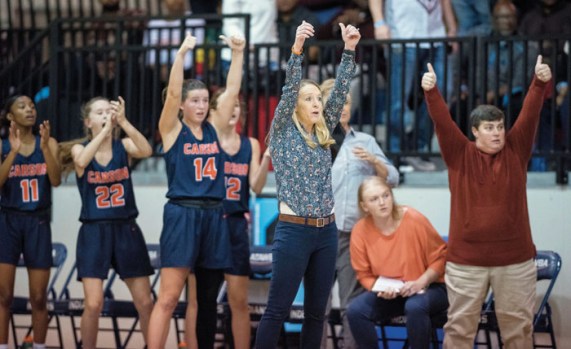 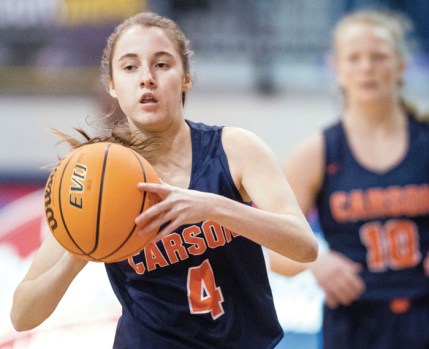 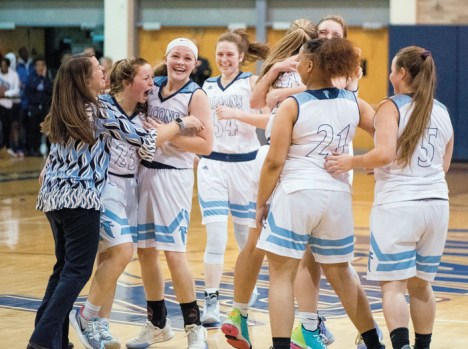 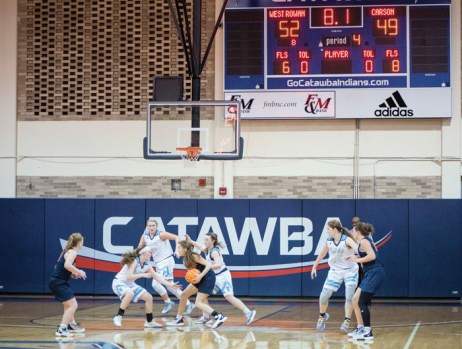 There were a couple of seasons where Carson smacked them four times, and even after the quartet was joined by transfer Whitley Arnott prior to last season, they couldn’t beat the Cougars.

At least until Saturday night at Goodman Gym. The undefeated Falcons (10-0) achieved a watershed victory in the championship game of the Dale’s Sporting Goods Sam Moir Christmas Classic.

West pulled out a 52-49 victory over the fourth-seeded Cougars (11-2), the two-time defending champs, with a lot of offensive boards, a lot of 3-pointers and a lot of defense. Coach Ashley Poole steered the second-seeded Falcons to the school’s first Moir title since a Shay Steele-led squad won in 2012.

West hadn’t made it back to a championship game since 2012.

“We seniors had never even made it past a 3 p.m. game,” said smiling West guard Taylor Poole, the coach’s daughter. “But we’ve been working every day for this.  It’s been defense, defense, defense.”

While most of the buzz around West is about all those points and rebounds that Wilson gets, it was defense, with five Falcons getting after it, moving their feet, fighting through screens, that saved the game at the end.

“We had three very tough possessions at the end of this game,” sighed Carson’s Brooke Stouder, who was coaching in her fifth straight Moir final. “We had two turnovers and then we couldn’t get a good shot on the last one.”

Carson inbounded the ball with 29 seconds left in the front court, but couldn’t get anything look that was close to open on that last possession. A desperate turnaround 3-point try failed, caroming off the rim as time expired, and the Falcons celebrated.

“Carson can shoot, all of them can shoot,” Blabon said. “But they had to have a 3 on that last possession and we closed out hard on the 3s. We played tough at the end.”

Carleigh Perry came out aggressively on the offensive end and Ellie Wilhelm made two 3-pointers as Carson took a 16-13 lead after a quarter.

But Wilson, the MVP who piled up 82 points in three tourney games, started hitting her stride in the second quarter, while Carson cooled off. It was 24-all at halftime.

Carson was only 4-for-17 on 3-pointers in the first half.

“We shoot a lot of 3s, but we usually make more,” Stouder said. “I thought we took some quick ones. before teammates were in position to try to rebound.”

Poole had struggled with her shot in the first half, but when she swished a long 3-pointer early in the third quarter, the game started swinging toward the Falcons. With the inside game West has, if they’re also making 3s, they’re a handful to defend.

“I had to stay confident, had to keep shooting,” Poole said. “I knew our bigs would rebound if I missed.”

Then came back-to-back 3s by Blabon and Poole, and West’s lead was suddenly 38-27. Blabon made another 3-pointer before the quarter was over, and West had constructed a 43-32 lead against the ice-cold Cougars.

“We wanted to take the 3s and we did a good job of taking them after several passes when we were in good rebounding position,” Coach Poole said. “Gabby and Taylor made some big ones.”

Most of Carson’s third-quarter possessions were of the one-and-done variety, with a deep shot going up and Wilson or Arnott yanking down the rebound.

“We needed some points in the lane, especially on a night when we weren’t shooting well, but it’s hard to get them against West’s size,” Stouder said. “We just had an awful third quarter. They had eight offensive rebounds in that quarter and we got in a hole. The third quarter — that’s kind of been our Achilles heal so far. We’ve got to try to fix that.”

When Wilson beat Carson’s pressure off her own dribble for a layup with 5:50 remaining, the Falcons led 47-33 and appeared to have things well under control.

But then Carson junior Colbie Perry got steaming hot. She made two corner 3s to cut the Falcons’ lead to eight. Sisters Lani and Hannah Isley teamed to get two off a turnover. Then Colbie Perry rained another 3, and Wilhelm made one for 47-all.

Carson had wiped out a 14-point deficit in a span of two minutes.

West Rowan fans had to be thinking, “Here we go, again,” but Wilson wasn’t thinking that.

“We lost the lead, but I never had a doubt as far as winning the game,” she said. “We knew what we needed to do. We just needed to execute.”

With 2:06 left, Colbie Perry would score again, floating down the lane for a 12-point quarter.  It was a rare two-pointer for her and cut West’s lead to 50-49.

West’s defense would shut out Carson the rest of the way.

“We’ve got seniors, good leadership,” Coach Poole said. “And all that practice we’ve been putting in on defense paid off.”

With 56 seconds left, Poole went to the foul line for a one-and-one.

“Make these, that’s all I was thinking,” she said. “Just make these.”

That put West up by three at 52-49. That turned out to be huge. Carson’s options were limited at the end.

“We turned it over way too much in the fourth quarter,” Coach Poole said. “But we did what we had to do.”

Colbie Perry scored 19 and Wilhelm had 18, but Carson shot just 9-for-33 on 3-pointers. Carson played the tournament without one of its better shooters — Maci Cooper.

Carleigh Perry and Wilhelm made all-tournament. Colbie Perry didn’t, mostly because ballots had to be turned in before she went off in the fourth quarter.

Taylor Conrad received the RONZ Award that is given for sportsmanship and character and honors the late Ronnie Gallagher, long-time sports editor of the Post.

“I was proud of our effort, proud that we gave ourselves a chance,” Stouder said. “We’ve just got to get better. There are dogfights ahead of us in the NPC.”

West’s Arnott, Blabon and Poole made all-tournament, along with Wilson.

Arnott didn’t have a big championship game offensively, but she rebounded fiercely and had a terrific game in the semifinals against Salisbury.