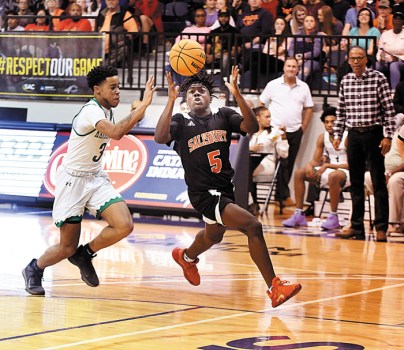 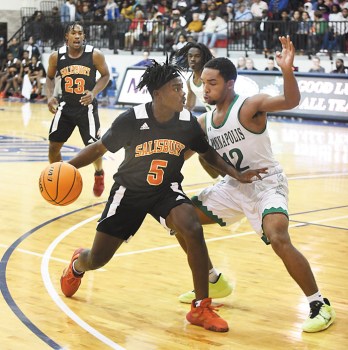 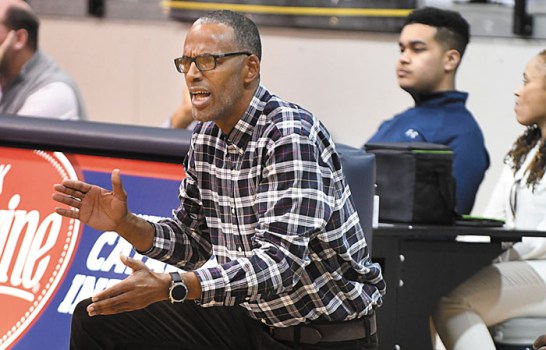 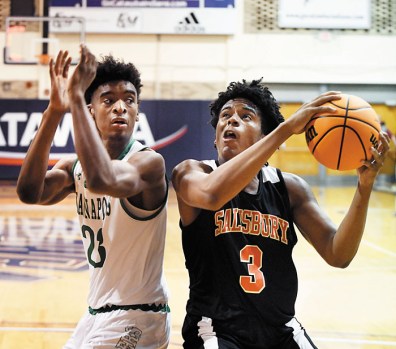 SALISBURY — Go ahead and mark this one in indelible ink.

A.L. Brown’s first championship in the Dale’s/Sam Moir Christmas Classic was an achievement that won’t be forgotten anytime soon.

“It’s special for me because I never got a chance to play or coach in this tournament,” winning coach Shelwyn Klutz beamed Saturday night at Goodman Gym, moments after third-seeded Brown reached through all the fog and drama and pulled out a 61-59 overtime win over Salisbury. “I’m just so proud of our guys. We got off to a bit of a sluggish start, but that was due to Salisbury’s aggressiveness. We could have easily folded, but we’ve got guys on our team who wouldn’t let that happen.”

Guys like tourney MVP J.D. Glenn, the 6-foot-6 handful who scored 18 points, the last two on a stickback that tied the score 56-56 as regulation time expired. And guys like senior guard Amari Grier, who netted all five of Brown’s points in OT.

“They under-estimated us,” Grier said after his 20-point effort. “We had to show what we could do. This was really big — senior year, we had to win this one.”

They accomplished that when Grier elevated down the lane, pump-faked in the air and buried an acrobatic layup with 27.5 seconds to play. His ensuing free throw closed the scoring.

“Man, you feel like you let one slip through your fingers,” Salisbury coach Bryan Withers said. “There are a lot of plays that I’ll go over and over in my mind. We missed the front end of one-and-ones three times late in the game. A tip here, a play there, some second-guessing about where to put guys on the floor. We had our chances.”

Salisbury’s fate was sealed with a miss when senior guard Zay Kesler back-rimmed a 50-foot heave at the final buzzer.

“I thought I was going to hit it,” said Kesler, who swished a 75-footer right before halftime in a CCC game against Thomasville earlier this month. “It felt really good when I let it go.”

When it clanged off the iron, no one felt more relieved than Klutz. “See this grey hair on my head?” he queried outside the Kannapolis locker room. “There’s a little more of it right now.”

Salisbury (6-3) played sneaker-to-sneaker defense in the first quarter and surfed to a 20-8 lead when Kesler (15 points) threaded a 3-pointer from the right side early in the second. By halftime, the Hornets were 10-for-36 from the field, 1-for-13 from long range and clinging to a 28-27 lead.

“It’s the first time we’ve shot under 40 percent from the field all year,” Withers said after SHS finished 23-for-66 from the floor (34.9 percent). “And see, that’s not us. We’re a better shooting team than that.”

Brown mounted 45-39 lead after three quarters — thanks to Glenn’s industrial-strength jam — then won a breathless race to the finish. The fourth quarter featured back-to-back 3-balls by Salisbury’s Cam Stout that trimmed the Wonders’ lead to 50-49 with 4:08 on the clock. Nate Brown’s three-point play, Kesler’s floater down the lane and Latavion White’s 12-foot jump shot put SHS ahead, 56-54, with 55 seconds to go.

That set the stage for Glenn — who powered down the lane, confiscated an offensive rebound and delivered an authoritative, game-tying layup as the clock ticked to 0:00.

“(Mi’Keim Moore) missed a shot and I had to put it back up in a hurry,” Glenn said. “I just ran the floor hard, tunnel-visioned. I had to get a shot off.”

In overtime, the teams resembled a couple of weary heavyweights in search of a knockout. Stout’s early 3-pointer from the top of the wheel gave Salisbury a 59-58 edge, but it went for naught following a couple of turnovers and a blown one-and-one situation. That presented Brown (9-2) and Grier an opportunity they weren’t about to squander.

“They played us tough and hard,” Kesler said after earning a berth on the all-tournament team. “They are some dogs. They compete at a high level.”

“This was great,” Grier said with a 100-watt smile afterward. “At our place, we barely get any fans. For us to bring a banner home, well that’s pretty special.”

And a night they’ll remember.