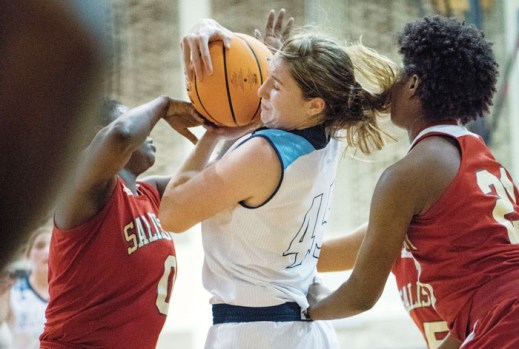 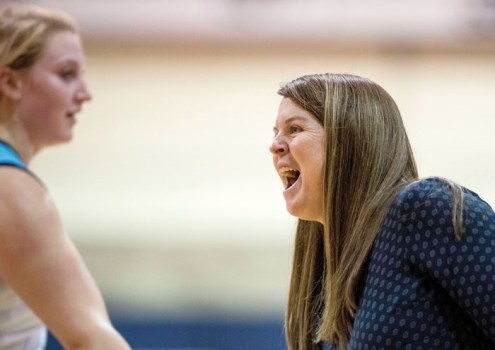 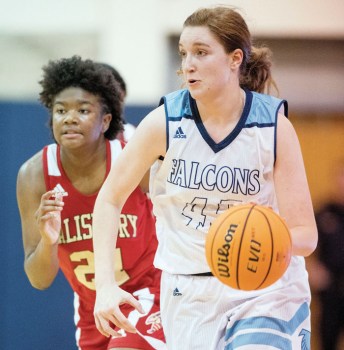 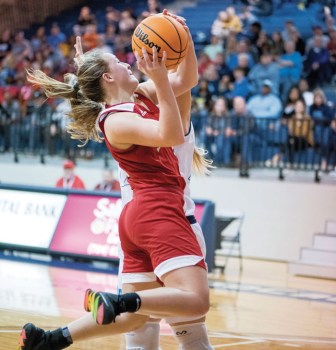 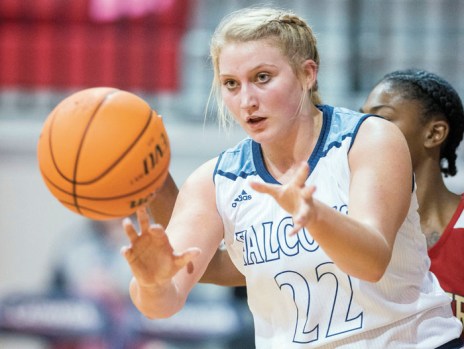 As she halted briefly, before climbing the stairs leading from the basement of Goodman Gym, her long-striding 5-foot-11 daughter, Abigail, passed her. That also was appropriate.

Wendy’s 1,764-point career (in just three high school seasons) has been part of West girls basketball lore since the 1990s.  A member of the Salisbury-Rowan Hall of Fame, she went on to excel at Florida State. Abigail, who has signed with UNC Asheville, surpassed her mother’s career points total with her final bucket  in an emotional 60-46 semifinal win against Salisbury.

Emotional for a number of reasons. Wendy is in the midst of a battle with cancer, and had surgery Thursday morning, the first day of the Dale’s Sporting Goods Sam Moir Christmas Classic. She still made it to Goodman Gym for the second quarter of West’s noon game.

She was back for Friday’s semifinal, as second-seeded West (9-0) confronted frequent tormentor Salisbury, the No. 3 seed, in a battle of unbeaten squads.

Salisbury had thumped West convincingly in the Moir event in each of the past two seasons. The Hornets were quicker and had Bryanna Troutman on hand to neutralize Wilson inside. But now Troutman is a freshman at Wingate, and West owns advantages in experience and height. West has five senior starters and has physical 6-footer Whitley Arnott operating as Wilson’s running mate.

“It was our youth vs. West’s experience,” said Salisbury coach Lakai Brice said, who will shoot for her 100th career victory in a third-place game against East Rowan at 3 p.m. on Saturday. “West has all those seniors. They went out and executed.”

Brice has just one senior starter, guard Anayia Fulson, who leads two freshmen and two sophomores. When Fulson was saddled with three fouls before halftime, the Hornets (8-1) were in serious trouble. They aren’t deep, and they didn’t have the numbers to press and try to make it a 94-foot game.

And in a half-court setting, West is deadly. West has good passers. Wilson shoots an extremely high percentage.

West coach Ashley Poole liked her team’s chances, but she correctly predicted the x-factor would be Arnott, a softball phenom who is headed to Catawba as a pitcher. Arnott is also a pretty fair basketball player who usually gives the Falcons about 5 points and 10 rebounds. Against the Hornets, in a career effort, Arnott would double those numbers.

“Coach talked to me about being more active and more aggressive, about taking shots that I’d been passing up,” Arnott said. “I took that first one, and it went in, and it was like, ‘Well, OK, I can do this.'”

Arnott even made a 3-pointer.  Just one of those nights.

Poole also sized up Salisbury’s team differently than most people. The Falcons chose not to focus their defense on Fulson or on talented freshman Kyla Bryant, Coach Brice’s daughter. Instead, the Falcons were intent on taking Salisbury shooter Rachel McCullough out of the game. McCullough can be lethal in the catch-and-shoot game, but West was determined to make her dribble and drive.

“We played a lot of zone, but we made sure we knew where McCullough was,” Poole said. “She can shoot. You can’t let her get going, and we did a good job with the game plan.”

For a quarter, the Hornets were right there, McCullough got loose for a 3-ball. Fulson and Bryant attacked and scored six apiece. Taylor Poole, the coach’s daughter, had to make two early 3s to keep West level. After eight frantic minutes, it was 15-all, anyone’s game.

“But the second quarter, that’s where they got us,” Brice said. “We just couldn’t get a rebound. On the offensive end, we were one-and-done every time. Our defense wasn’t bad on their first shot, but they kept getting offensive rebounds and second chances.”

Seventeen of West’s 20 second-quarter points came from Arnott and Wilson, who were pounding away. Arnott’s surprise 3-ball late in the half made it 35-24.

“We’re seniors,” Wilson said. “We felt like with our experience that we should be the better team tonight, and we played like we can play. This was a defining game for all of us.”

When Fulson was whistled for her fourth foul early in the third quarter, it was up to Bryant to try to keep the Hornets in it. She did her best, but all five West seniors (including Cindy Connolly and Gabby Blabon) scored in the third quarter.  DeDe Cuthbertson came in and got a hoop after Blabon sat with foul trouble.

West carried a 16-point lead to the fourth quarter, and even with a flurry of West turnovers down the stretch, the Hornets couldn’t get closer than 11. They missed shots that could’ve trimmed the deficit to eight or nine.

“We didn’t finish as strong as I would have liked, but this was still the best game this group of seniors has ever played,” Coach Poole said.

Wilson averages 28 points (her mother set a school record in 1994 with 24.7 points per game) and she finished with 28 against the Hornets. She also scored 28 in the first round.

Ahead for Wilson are more milestones — Hillary Hampton’s 1,814 points and Ayana Avery’s school-record 1,995. Then becoming the program’s first 2,000-point scorer.

But that’s all  down the road.

As far as what matters right now, West will take on Carson (11-1) for the championship on Saturday at 6 p.m.  West’s seniors are 0-10 against Carson, but the Falcons showed against Salisbury what they’re capable of.

“It’s been a crazy year,” Abigail Wilson said. “I’ve just tried to fight through everything that comes my way.”