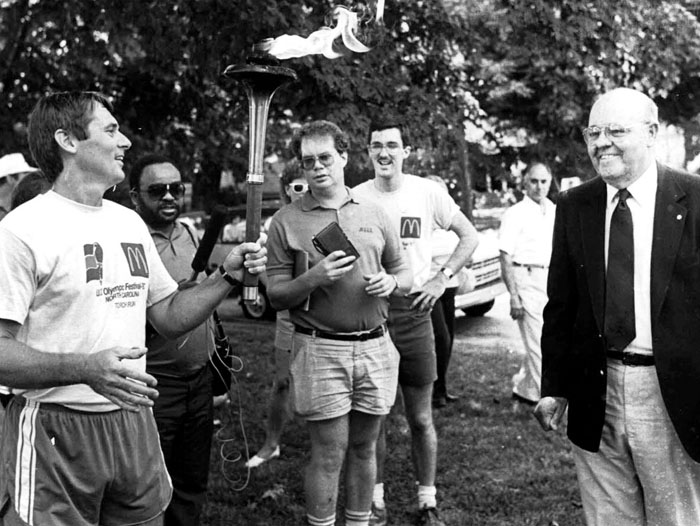 Dr. Bob Glassgow hands the Olympic Torch to Mayor John Wear at the Bell Tower in 1987. A young Howard Platt is in the center. Submitted photo.

SALISBURY — A 10K race in 1978 and the city’s small-town feel helped inspire the Glassgows three years later to make Salisbury their permanent home.

Then a young Navy dental officer, Robert Glassgow was attached to the 2nd Fleet Marine Force at Camp Lejeune. And when he arrived there, running was a national craze that was rapidly spreading.

“Running was the thing to do. Several of my company lieutenants began running local races with the idea of running a marathon and breaking three hours while doing it,” Glassgow said.

Glassgow had used the GI Bill after a stint in the Air Force during the Vietnam War to start dental school in Gainesville, Florida, where the local hero was Frank Shorter, just off running fame in the 1976 Olympics. And while at Camp Lejeune, Glassgow read about a 10K race in Salisbury set for June 10, 1978, called the Heart Run. He decided to go and completed the run in 42 minutes and 10.7 seconds.

Even though Glassgow and his wife, Patti, grew up in Charlotte, they didn’t know the difference between Statesville and Salisbury.

“We had a wonderful time here, yet never thinking that we might later live here and raise our family in such a wonderful city,” he said.

Glassgow had entered the U.S. Navy to get a two-year scholarship to finish his dental schooling and needed to serve two years on active duty to pay back that scholarship, which put him at Camp Lejeune. He completed his residency training at UNC Chapel Hill.

He had previously served in the Air Force, enlisting right after high school in 1966 and volunteering to go to Vietnam.

“I spent my 21st birthday in a rocket attack in Da Nang and also remember watching the 1969 moon landing on TV,” he said. “I later met Bob Hope, Connie Stevens and Neil Armstrong from that moon landing when they came to entertain the troops.”

When his mandatory Navy service was complete, Glassgow and his wife remembered the city of Salisbury and moved here in 1981 to open his dental practice.

“Even though we grew up in Charlotte, we liked the small-town feel of Salisbury,” he said. “We remembered that people couldn’t have been nicer. We have a daughter, Tiffany, and a son, Scott, and thought Salisbury was the right place for our family.”

But the 10K wouldn’t be his only run in Rowan. Glassgow continued running, with 37 marathons started and 35 finished, unofficially the second highest total in Rowan County.

With his best time of three hours and 10 minutes at the 1978 Charlotte Marathon, Glassgow says he is most proud of breaking four hours at the 1985 Grandfather Mountain Marathon, one of the toughest marathons in the South.

He stopped running at age 65, but plans to work the Winter Flight in January after running it from 1990 to 2008.

“I always loved the great sweatshirts that came with race registration and enjoyed watching the brotherly competition between Franco and Myron Goodman at each race,” he said.

Another lasting memory was the honor of carrying the Olympic Torch in 1987 as it passed through Salisbury on a hot Sunday afternoon on the way to Raleigh. Runners could pay $25 a mile to carry the torch and both of Glassgow’s children also took part.

Glassgow’s dental practice today is limited to periodontics, and he usually works two days a week. In his spare time, he makes birdhouses of well-known structures, buildings and houses.

“I install them around our cabin in Blowing Rock. They have lights inside, which our grandkids love to see at night,” he said. “And since I stopped running, I now love power walking the hills of Blowing Rock one to three hours each day in all kinds of weather while listening to books on tape. I enjoy staying busy.”

Glassgow, now 71, continues to drive those same Statesville Boulevard Hills that he ran in 1978 four times a day to and from work.

“They weren’t as hard to run as I thought that they would be back in 1978,” he said. “Salisbury has been a wonderful place for us to raise a family and make so many friends and special memories over the last 38 years. It was definitely the right decision for us to settle in Salisbury and we look forward to celebrating our 50th wedding anniversary next year.”