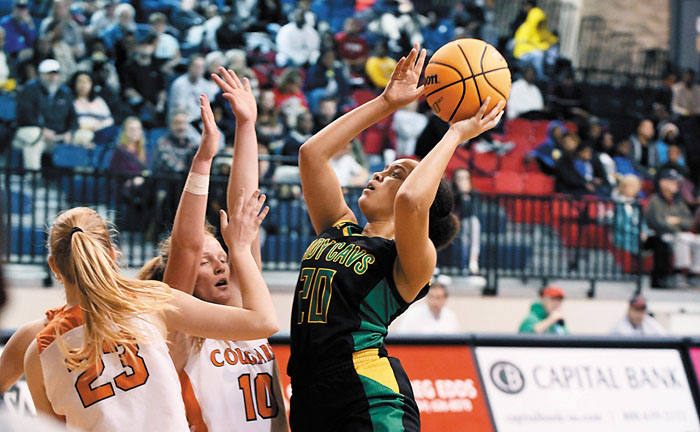 The contest was a girls consolation game in the Dale’s/Sam Moir Christmas Classic, after both teams had lost during Thursday’s first round. North (7-3) now plays for fifth place on Saturday (noon) against A.L. Brown (3-7). The War Eagles (0-11) and South Rowan (1-9) meet at 9:00 on Saturday morning for seventh place.

Wilkerson, a 5-8 sophomore guard, and daughter of head coach Lamar Wilkerson, scored 20 points, grabbed 11 rebounds, had four steals and two assists to lead the Cavaliers on Friday. Taborn, a junior guard, followed close behind with 19 points, five assists and three steals against the young War Eagles.

Winless Davie lists 10 freshmen on its roster and started two of them — Somer Johnson and Elizabeth Johnson. Three sophomores — London Dirks, Olivia Tatum and Kaylyn Nuckols — made up the rest of the starting lineup.

Davie struggled from start to finish against the quicker Cavaliers, turning the ball over a whopping 26 times. The War Eagles also shot poorly, make just 9-of-46 shots from the floor (19.6 percent) and 5-of-12 free throws (42 percent).

“It’s good to get a win,” said Coach Wilkerson, who saw his team bounce back from a lop-sided loss to Carson on Thursday. “Hopefully, we can get better tomorrow (Saturday) and get back to ourselves, the team we showed in spurts today.

“Our communication on defense and zone shot selection has been a little bit off in this tournament,” continued the Cavs’ coach. “So, hopefully, we can communicate better on the defensive side in the next game and get better with our transition offense. Hopefully, we can get ‘it’ back before we get back into conference games.”

North struggled a little as well, early in the game, but thanks to Wilkerson, the Cavs calmed down and led, 9-0, after the first quarter, and 21-7, at halftime.

Wilkerson scored 13 of 20 points in the first half, while Taborn came through with 15 of her 19 points in the second half. Taborn drilled two big 3-pointers in the last half, after Davie’s best offensive effort came in a 14-point third quarter.

Davie scored the first eight points of the third period, cutting its deficit to 21-15, but could get no closer. North quickly restored order as Wilkerson had two layups and a free throw and Taborn scored two layups and nailed a jumper. Suddenly, the score was back to 32-19.

Taborn and Kamora Cannie connected on 3-pointers in the waning seconds of the period and North held a commanding, 38-21 advantage, heading into the final frame.

Two freshmen also made contributions for North: Cannie followed in the scoring with six points and Chloe Stoner did not score but pulled down eight rebounds. Kimya Lynch also had six boards.

Wilkerson was also pleased with junior guard Darlissa Robbins, who played “some real good minutes,” after returning from knee surgery. She rounded out the Cavs’ scoring with two fourth-quarter free throws.

Like Davie, the Cavaliers, too, were somewhat careless with the basketball. Coach Wilkerson was not pleased with 17 turnovers by his team. “We shot ourselves in the foot at times, and I told the girls that we’re blessed to be able to get back out there and play a game tomorrow (Saturday),” he said.

Elizabeth Johnson led Davie with nine points and the same amount of rebounds. She did most of her damage from the free throw line, sinking 5-of-8.