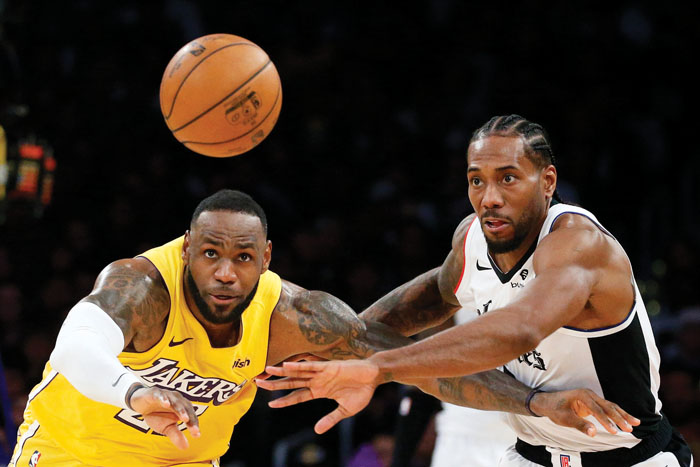 By DAN GREENSPAN Associated Press
LOS ANGELES (AP) — Kawhi Leonard scored 11 of his 35 points in the fourth quarter and had 12 rebounds to help the Los Angeles Clippers beat the Los Angeles Lakers 111-106 on Wednesday night in the NBA’s marquee Christmas game.
Montrezl Harrell had 18 points off the bench, Paul George added 17 and the Clippers improved to 2-0 against the Lakers this season.
Kyle Kuzma led Los Angeles with 25 points. LeBron James had 23 points, 10 assists and nine rebounds, and Anthony David had 24 points. The Lakers have lost four straight games.
Los Angeles had a chance to tie in the final seconds, but video review showed James touched the ball last after Patrick Beverly knocked it away as James went up for a 3. George hit two free throws for the final margin.
Lou Williams made two free throws — after a questionable foul call against Davis for tapping the swingman after his transition layup rimmed out — to give the Clippers a 105-103 lead with 3:29
Leonard, who had a 3 to cap a 7-0 run and tie it at 101 with 5:14 remaining, then made four late free throws.
TIP-INS Clippers: Williams had six points and seven rebounds. … The Clippers had a 50-42 edge in rebounds.
Lakers: The Lakers bench outscored the Clippers’ backups 49-36. … James played in 14th Christmas Day game, second in NBA history to Kobe Bryant at 16.
UP NEXT
Clippers: Host Utah on Saturday night.
Lakers: At Portland on Saturday night.
___
More AP NBA: https://apnews.com/NBA and https://twitter.com/AP_Sports