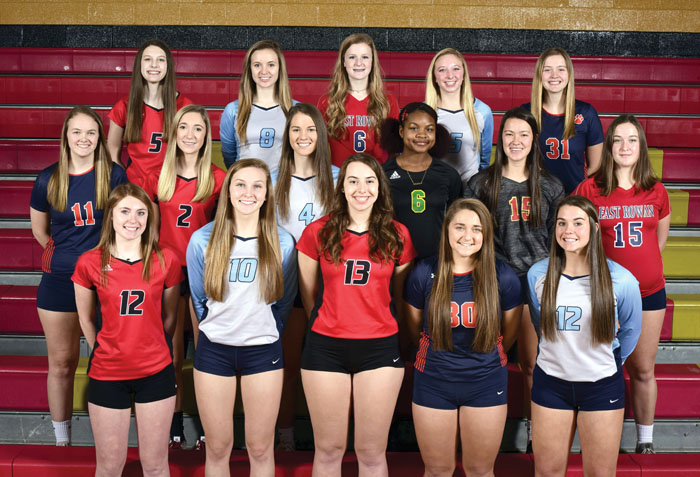 Her team soared right along with the 5-foot-9 outside hitter. The Falcons were 28-1 and stayed undefeated until the West Region final. In the final MaxPreps listings, West was ranked second in 3A, fourth in the state for all classifications, and 125th in the USA.

“I’ve coached some great players in my career, but ‘T’ is the best ever,” West coach Jan Dowling said. “She’s the most complete player, and she has the most volleyball knowledge. She also has the highest vertical. She jumps out of the gym. I don’t think there’s ever been a ball set that she couldn’t touch. She’s a gem and she’s going to do great things in college.”

Also elevating its volleyball game to a loftier level than ever before was South Rowan. The Raiders (28-2) put together a 25-game winning streak between a setback to West Rowan on Aug. 26 and a Nov. 2 loss to Fred T. Foard in the fourth round of the playoffs. MaxPreps ranked South fifth in 2A and 40th in the state when all was said and done.

West and South ran the table in their respective leagues. The North Piedmont Conference that West went 10-0 in is one of the state’s top 3A leagues. The Central Carolina Conference that South went 18-0 had several strong teams. There were a lot of losable games for South, especially on the road, but the Raiders never slipped.

South’s standout, senior Kira Rymer, isn’t as explosive as Hester — no one is — but she’s versatile, tall (5-foot-11) and skilled and put up mind-blowing statistics. At the 2A level, she was every bit as dominant as Hester was in 3A. Rymer accounted for almost half of South’s kills.

Rymer’s hitting percentage — that’s kills minus hitting errors, divided by attempts  — was .588. Her kill percentage (kills divided by attempts) was 66.2 percent. Middles are supposed to have higher percentages than outside hitters and more hits get dug in the NPC than the CCC, but to put those numbers in perspective, Hester had a kill rate of about 50 percent and a hitting percentage of .390. Hester’s numbers were awesome. Rymer’s numbers were ridiculous.

“Kira was a really good leader for us because she’s just determined to do everything right,” South coach Jenna Horne said. “She’s coachable. She’s one of those people that takes everything you work on in practice into the matches.”

Hester and Rymer led their teams to conference tournament championships to cap unblemished regular seasons. Both had to be easy choices by their leagues’ coaches as conference players of the year.

Hester is headed to D-I Troy to continue her career and education, while Rymer will likely be a volleyball/track and field student-athlete at the D-III level, but as high school seniors they were both deserving of every accolade there is to hand out.  You can’t do much more than they did for their teams, so the Post honors both girls as co-players of the year.

They were teammates a while back with the High Rock Volleyball Club before they went separate ways. They get along and respect each other.

“West went one more round than we did in the playoffs, so we had a chance to come watch their regional final match with West Henderson, just as fans,” Rymer said. “Tori’s hits are always scary, but the thing that impressed me most about her that night was her passing. She does everything on a volleyball court exceptionally well. People says she’s probably as good as anyone from Rowan County has ever been, and I believe that.”

When West and South tangled back in August, the Raiders took it to the Falcons, at least for a while. West adjusted, started using three blockers against Rymer, and the tide turned. South had 23 kills in that match. Rymer had 14 of them.

“It was pretty frustrating early because Kira was just killing us,” Hester said. “She’s definitely one of the best players we faced all season.”

Rymer’s career numbers were unique, as she joined the 1,000 club not only in kills and digs, but assists. She was able to log all those assists by playing in the combination role of opposite hitter/setter for the Raiders the past two seasons. As a freshman, she was exclusively a setter. As a sophomore, she was a hitter. Her junior and senior years, the Raiders counted on the sure-handed Kira and cousin Anna Rymer to share both jobs.

Hester and Rymer were at her best when the going got toughest.

One of South’s most meaningful wins was a breakthrough victory against Carson that provided a lot of confidence. Rymer had 26 kills, 16 assists and 15 digs against the Cougars.

The last four matches the Falcons played were serious struggles in Mount Ulla with A.C. Reynolds, T.C. Roberson, Watauga and, finally, West Henderson. In those four matches, Hester totaled 103 kills and 108 digs. In her final high school game, she nearly carried West to the state championship game with 31 kills and 29 digs.

A two-time conference player of the year and three-time Rowan County Player of the Year, Hester verbally committed to Troy University, 470 miles from home, in the summer of 2018. She signed with the Alabama school in November.

“Tori is just as talented in the back row as she is in the front row,” Troy coach Josh Lauer said when Hester signed. “She’s a skilled blocker, a fiery competitor and an explosive attacker.”

Hester had a lot of offers, many in-state, but said Troy, despite the distance, was where she felt most at home with the players and coaching staff. Lauer is a fiery guy, but Hester has played for a pretty fiery coach in high school.

“I want a coach that pushes me,” Hester said. “And he’s a great coach who knows volleyball.”

The Falcons delivered — and then some.

“This was the best team I’ve played on because there was never a time when one person was above the team,” Hester said.  “When you’ve got a high school girls team with no drama, that’s pretty good. That’s a big reason why we played so well.”

South was coming off a 22-6 season that included a conference co-championship. The Raiders were expected to be good, but everyone also wondered if things might be different without Janiya Downs.

But the Rymer cousins led a team that got progressively better.

“At the start, our goal was to win the conference and make the third round of the state playoffs,” Kira said. “But once we got going, we felt like we could beat anyone if we all worked together. We actually moved past our goals. We made history.”

Dowling, who has coached West the last five seasons after leading South from 2005-14, is the Post’s pick as Rowan All-County Coach of the Year.

She also was named 3A Coach of the Year by the North Carolina Volleyball Coaches Association.

Dowling is the North Piedmont Coach of the year, while Horne is the Central Carolina Conference Coach of the Year.

Dowling was the Post’s choice, not because West beat South or went one round further in the playoffs, but because Dowling and West overcame losing setter Allison Ennis in early October. Noe Gaeta came up from the jayvees to replace Ennis, and the Falcons kept pulling out a lot of remarkable 3-2 matches. West also went 10-0 in a conference that had three teams, in addition to West, that were ranked in the state’s top 50.

One of those top-50 teams from the NPC was Carson, which didn’t drop off the map. The top volleyball program in the county for most of the last decade, the Cougars went 20-8.