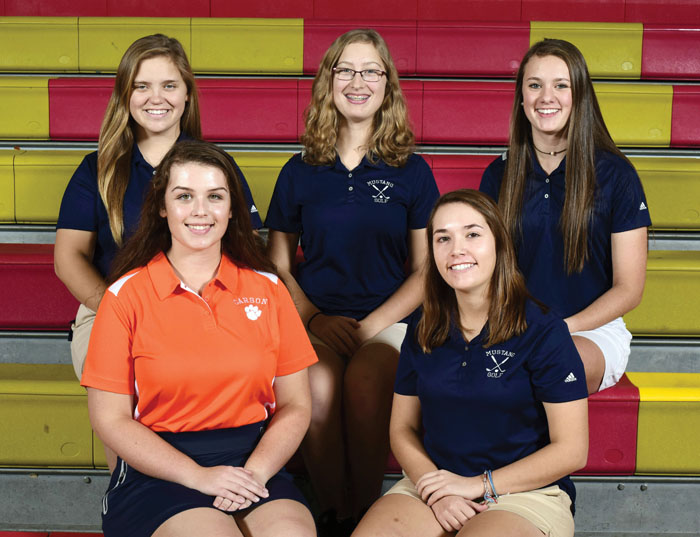 SALISBURY — Golf is normally a game of peaks and valleys, of ups and downs, but the graph for Carson senior Sophia Brown shows almost a vertical line of improvement.

The Post’s Rowan County Golfer of the Year got started quite late for a game known for its youthful phenoms.

“I was an eighth-grader at Erwin the first time I was on a golf course,” Brown explained. “My grandfather, John Masten, took me with him one day to McCanless.”

She carried a single club that day, a 7-iron. That was the start.

“The 7-iron is still my favorite club,” Brown said with a laugh.

As a Carson freshman in the fall of 2016, she took some lumps from courses and opponents.

“I was shooting in the 60s in the nine-hole conference matches,” Brown said.

That’s the year she competed at the Country Club of Salisbury in her first Rowan County Tournament, She shot 110. She finished 29 shots back of teammate Micah Furr, but she carded the third-best score for Carson and helped the Cougars take home the team championship.

Brown was shooting low 50s for nine holes by her sophomore year. But even with Furr graduated, Brown posted only the third-best Carson score in the 2017 Rowan County Tournament held at McCanless.

The girls only played nine holes that year. Brown shot 51. Brown landed the eighth spot on an eight-girl all-county team.

She qualified for the state tournament. She shot 204 for two rounds, but it was an honor to be there.

“When you get to state, you’re playing with such great golfers,” Brown said. “I just tried to stay calm and play my best.”

She saw enough encouraging progress that she promised herself she’d be crowned as county champion before she finished high school.

Her junior year, the girls returned to playing 18 holes to decide the Rowan County championship. Brown shot 93, nine shots behind East Rowan’s co-medalists Carmen Fraley and Camryn Corriher. She tied for the third-best score.  Brown was the only non-Mustang on the seven-person all-county team.

She qualified for the state tournament for the second time, although she still wasn’t able to break 100 in either of her two rounds at the top level.

Brown made it. She made another significant jump as a senior.

Carson had only two golfers this year — Brown and Kate Carter. Three is the minimum to register a team score in girls golf. That was disappointing for Brown, but even if Carson couldn’t compete as a team in a North Piedmont Conference match, she was determined to be the individual medalist as often as possible.

That was a challenge. South Iredell and East Rowan had a number of good golfers.

In the NPC match on Sept, 11, at Rolling Hills, Brown achieved a personal best for nine holes — 36.

She was the top golfer for the conference over the course of the season, with an average round of 42. She was named North Piedmont Conference Golfer of the Year.

On a mid-October day at McCanless, where she’d gotten started four years earlier with a 7-iron,  Brown shot 81 to win the Rowan County Tournament by six strokes. She was steady off the tee, made her share of putts and recorded lots of pars.

“It’s a milestone,” Brown said. “The key was to come out with a positive attitude.”

By winning the county, she’d kept a promise to herself, although even Brown hadn’t expected an 81. In the county event, she’d charged from 110 to 81 in three years.

Brown wasn’t done. She would qualify for the 3A state tournament for the third time and was able to finish her high school career on the last day of the 2019 season.

Experience matters. This time, she would handle the nerves and expectations better.

Brown is headed to college for academics, but it’s unlikely she’ll play competitively at the next level.

Still, golf will always be part of who she is and she can look back with pride on the remarkable strides she made as a high school athlete.

East coach Rhett Teems, who led the Mustangs to their straight county championship, second place in the NPC and a tie for sixth in the 3A Central Regional, is once again the Post’s Rowan County Coach of the Year.