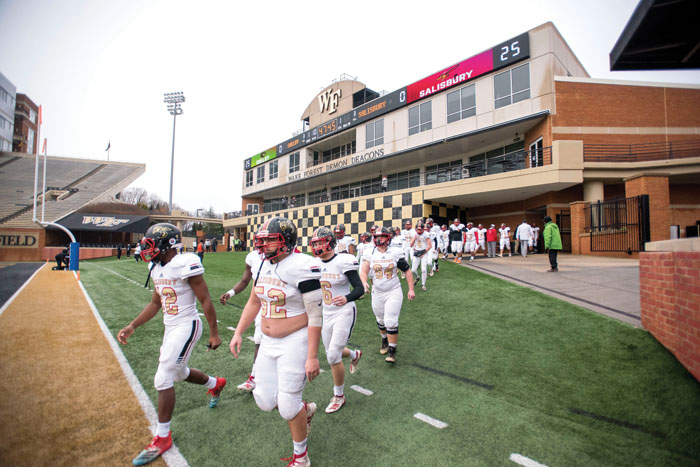 JON C. LAKEY/SALISBURY POST ... The Hornets take the field for the game. The Salisbury Hornets fell to the defending state champions Shelby High School 34-0 in the 2AA Championship game at BB&T field in Winston-Salem on Saturday. Salisbury,North Carolina,12/14/19.

WINSTON-SALEM — We didn’t necessarily expect the state championship from Salisbury’s football team on Saturday, but we received even less.

The over-achieving Hornets were 30-point underdogs entering the 2AA state championship game, then put their pinch-me-I’m-dreaming season to bed without raising much of a stink. Shelby 34, Salisbury 0, at BB&T Field was awkward and bumpy and worse than showing up for your SATs without a No. 2 pencil.

“We knew this was important. We just didn’t play very well,” coach Brian Hinson testified to a small cadre of inquiring reporters. “That’s not gonna sound great  in the paper — and it’s not gonna write a bunch of paragraphs —  but we just didn’t play very well. Shelby is a great football team. I call them a machine because they keep pumping out great football teams.”

Salisbury finishes a noble second in the state after top-seeded Shelby pumped out 359 yards of total offense and defended the state title it captured a year ago. Salisbury, winners 13 times in 16 outings this autumn, managed a must-be-a-misprint 39 yards.

“They were big and fast and well-coached,” said quarterback Vance Honeycutt, the junior who might want to check his fillings, after being sacked five times. “And they showed that to us all day. It was really hard to move the ball against them. Everything they did on the defensive side of the ball was better than our offensive side.”

Even Mike Wilbanks, Shelby’s awestruck first-year coach, was surprised with the one-sided disparity on the scoresheet.

“A year ago, I’m not up here,” he said from the post-game podium. “But honestly, I didn’t see this coming.”

How could he? Wasn’t this the Salisbury team that had gotten pretty good at breaking hearts this post-season? The under-the-radar group that used its combat-ready, hermitically sealed defense to sideswipe four worthy playoff opponents? The branded, official-and-certified prevent unit that had nothing-to-lose and everything to gain? The Cinderella squad that invited us to this blissful, mid-December party — then quietly instructed us to leave?

“It may be disappointing, but it’s still an accomplishment,” inside linebacker Jabril Norman explained. “We knew how good Shelby was. There are like 400 teams in the state and we finish top two — because the people in this locker room kept believing. We’re taking pride in that and enjoying the moment.”

As they should. Salisbury’s climb was certainly worth the fall it suffered yesterday. Its ascent to the championship match went beyond the margins, providing thrills and spills for its dedicated faithful. Part of the problem was a porous offensive line that was overwhelmed by Shelby’s crippling, dirt-eating defense. The Lions routinely barged into the backfield uninvited, forced two turnovers, absolutely shackled Salisbury’s running game (negative-6 yards) and deftly steered clear of any-and-all danger. The Hornets’ longest play from scrimmage was Honeycutt’s harmless, 11-yard completion to Parker Lippard in the second quarter.

“That defensive line committed to the game,” said Hinson. “But as an offense, we’ve got to go out and execute and take advantage of opportunities.”

It’s one thing to have a carefully scripted battle plan and quite another to successfully execute it. Salisbury didn’t. Perhaps in a foreboding sign, SHS squandered an immediate scoring chance when junior special-teamer Brandon Broadway recovered a fumble on game’s opening kickoff. From the Shelby 31-yard line, the Hornets got to the 19 and then the drive went backwards.

Moments later, Salisbury spun the wheel of misfortune again. Its second possession began at the Shelby 42 and quickly disintegrated. A false start penalty was followed by an incomplete pass and a crunching, high-low sack on Honeycutt. On fourth down, a punt play blew up in the backfield when the snap recklessly floated 17 yards in the wrong direction.

“We needed to ready-up a little more,” said right tackle Tkaii Gaither. “It was one disappointment after another. I was looking at our team after (running back) Mike McLean got tackled behind the line on some play. I said to everyone, ‘C’mon, we do this every day. Bring up the intensity.'”

It was not to be. Shelby regrouped and proceeded to force its will on the Hornets, driving for three first-half touchdowns and two in the second. Salisbury offered little resistance, reaching the red zone only once and converting just one of 14 third-down chances.

Of course, the only bad thing about being the Cinderella of the playoffs is you have to be home by midnight. And the Hornets got there with time to spare.

“It feels like we came together and beat the odds,” center Chad van der Poel said. “No one saw us coming — all through the regular season, Round 3, Round 4 — everyone had us beat. We loved proving people wrong.”

In the end, Salisbury passed all those toilsome tests but not the final exam. This one, they failed.

“It’s disappointing,” said sackmaster Zae Clay, one of six defensive starters Hinson expects back in 2020. “But at the same time, we gave it our all. Nobody believed in us, not even in our own hometown.”

Then, after a pause for effect, Clay raised an index finger and offered: “But you know what? We were here for a reason.”

Indeed they were. Even if it wasn’t their brightest moment.