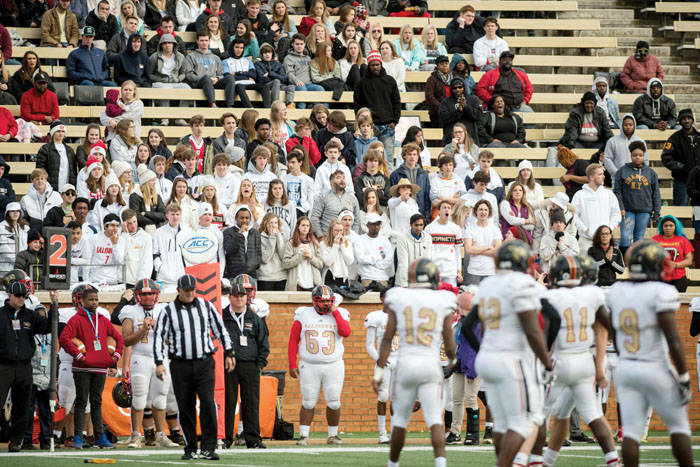 JON C. LAKEY/SALISBURY POST ... Salisbury prepares to take the filed for the opening kickoff, as its student section, dressed in “white-out” mode, cheers them on.

WINSTON-SALEM — Optimism was high Saturday morning and when Shelby fumbled the opening kickoff in the state 2AA championship football game, Salisbury’s side of the field — bench and fans — roared.

But the at the end of the day, only Shelby’s Lions roared. The defending state champs repeated, blanking the Hornets, 34-0, ending a fun and exciting run.

Salisbury had taken a five-game winning streak into the contest, including four straight playoff victories. Having been seeded No. 7 in the East bracket meant two long trips towards the coast, then a short trip to Randleman — and a rugged 14-7 win over the No. 1 seed in the East final.

Then came Saturday and the title game, against the No. 1 seed in the West Region, a battle-tested Shelby team that came into the contest with a 13-1 record.

After the final whistle and the initial disappointment and tears subsided yesterday, a sense of pride was evident from administrators, coaches and players alike.

“I’m just extremely proud, I really am,” said Salisbury athletic director Randy Wood. “It’s been a true blessing to be a part of this journey with these young men. What (coach) Brian Hinson has done in his first three years is nothing short of incredible, and what a building block this is. We here in the state championship game as a No. 7 seed out of the 2AA East.

“It all started on a hot day in August and culminated on a Saturday afternoon in December,” continued Wood. “To be one of 16 teams left playing today, we’ll take it every year. We’ve got a special group. I love them. Coach Hinson tells them that on a regular basis and he means it. And I mean it. Twenty-some seniors we’ve got to say goodbye to, but at least, we got to play with them through December.”

This season, the Hornets started 6-0, fell to Oak Grove, won two more, fell to North Davidson and then almost ran the table. They finished 13-3 and maybe, just as important, got people excited again about Salisbury football.

“It really brought our community together and it was just a joy to see in the stands today, how many people came to support us,” said Wood.

Salisbury principal Luke Brown was also full of pride after the game on Saturday.

“We’ve had a phenomenal season,” Brown said. “I’m so proud of my coaches, and I’m so proud of the kids. They fought to the end and showed great sportsmanship, even in the face of adversity. We weren’t supposed to be here. Nobody thought that we were going to go very far at all. We’ve been the underdog in several games this year.

“We’re a young team, but a talented team,” continued Brown. “This group of seniors, who have worked so hard to turn this program around, played in the last game in high school that they could have possibly played in. And you can’t ask for more than that.”

Both Brown and Wood pointed out that without tremendous community support, the playoff-game trips to Washington and Hertford County, as well as staying in a hotel Friday night in Winston-Salem, would not have been as enjoyable.

“I’m super proud and thankful to the community for helping us get here,” added Brown. “They really pulled funds and love together to really give our guys an experience, and that’s all you can ask for. We’ve got some great donors in town who really believe in what we’re doing and the vision of the program, — not only football, but all of our programs.”

And it was an experience. Just ask Chad van der Poel, Salisbury’s senior center, who was a 9-year-old in the stands with his parents when the Hornets defeated Northeastern, 30-0, for the state championship in 2010 — on the same field.

“The community was great to us,” said van der Poel. “It’s been quite a blessing — the things that we were provided on this trip through the playoffs. I think all of us grew up watching John Knox and Romar Morris play in this game, in this very stadium. I certainly dreamed of it. And here we were.”

Of course, Hinson was grateful for the support his team received this season.

“It’s been awesome,” said Hinson. “It’s something we talked to our kids about. A lot of time, our school and our little area doesn’t get a lot of positive publicity and people want to focus on some bad things, but our community has been so excited and rallied behind these kids in this journey that we’ve been on for the last five weeks. It’s been great to see.”

And Wood and Brown say that Hinson’s work has been great to see.

“Coach Hinson came in after a three-win team and immediately took us to the playoffs three years in a row,” said Wood. “If you ask him, I don’t think even he envisioned it this quickly. Now that the foundation is set, now he can build the rest of the house.”

Said Brown: “I’m proud of Coach Hinson — that he is a leader of young men and he is teaching them much more than Xs and Os. I couldn’t be happier with that.”