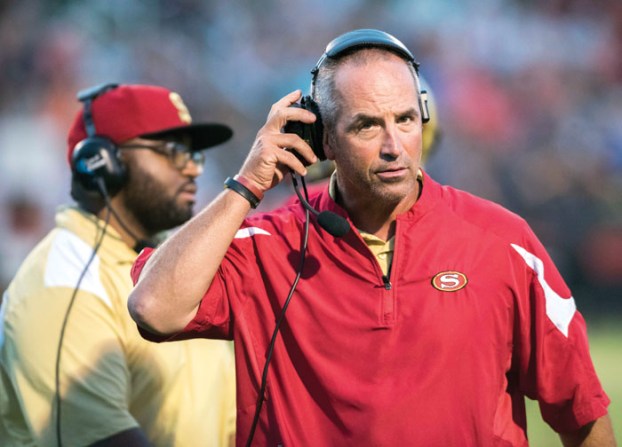 Herndon-led defense has been a key for the Hornets 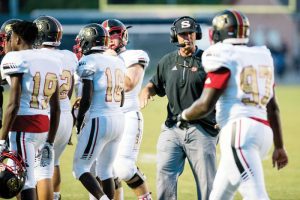 Salisbury’s Mike Herndon is no exception. As he watched the Hornets throw a pick-six late in the first half on fourth-and-long to temporarily give Randleman life and a 7-all halftime tie in a game the Hornets had thoroughly dominated,  Herndon who would have preferred to see his team punt, yanked off his head set and fired it to the ground.

It shattered. He was sheepishly picking up pieces and patching it back together after that.

“Thought I was done,” Herndon said, with a laugh.

Herndon, now in his early 50s, could joke about that fiery outburst in the SHS gym on a quiet Wednesday afternoon because the Hornets beat Randleman, 14-7, to reach the 2AA state championship game.

Even after four playoff wins, three on the road as a No. 7 seed, the Hornets (13-2) will be serious underdogs when they tackle Shelby (13-1) at BB&T Stadium in Winston-Salem on Saturday at 11 a.m.

“Not crazy about the 11 a.m. kickoff, not crazy about not being able to get into the locker room until 9:30,” Herndon said. “But you know what? It beats the heck out of sitting at home.”

A High Point native, Herndon devoted his life to baseball long ago, but wherever he’s been, his knowledge of young athletes and of defensive X’s and O’s has been a major bonus for the football program.

He’s been one of the best at what he does. He began his coaching career at  T.W. Andrews High in High Point. His next stop was Southwest Guilford where he enjoyed runaway success and guided the Cowboys to the 1997 2A state championship in baseball.

While he was stationed at Southwest Guilford, he also learned a great deal about defensive football from Richard Kent, who would become a big part of David Bennett’s staff  during Catawba’s glory days.

Next, the Herndons, Mike and Carol, moved to Salisbury.  If things had gone just a little differently, if the timing had been altered just a hair, Herndon might have become the head baseball coach or the head football coach at West Rowan.

Instead, he headed to Davie County, where he would coach 211 baseball wins in 14 seasons. No state titles, but eight championships (regular season or tournament) in the rugged 4A Central Piedmont Conference. He would also make an impact for the War Eagles’ football program as a passionate linebackers coach.

Herndon had a chance to leave Davie to coach college football with Bennett at Coastal Carolina, but his heart always has been with the high school youngsters.

In 2010, Davie lost to Durham’s Hillside High in football’s 4A state championship contest, almost a home game for Davie’s War Eagles at BB&T Field at Winston-Salem. Davie’s quarterback that day was Mike’s son, Carson Herndon, who had led the War Eagles on an improbable playoff run, four playoff wins, three on the road, just like this year’s Salisbury Hornets.

Later on that historic 2010 evening at BB&T, a Salisbury High team, coached by Joe Pinyan, shut out Northeastern High (Elizabeth City) to roll to the 2AA state championship. To get to that game, Salisbury had persevered in an amazing regional final confrontation with Shelby at Ludwig Stadium.

When Carson Herndon began his college baseball career as a pitcher at Liberty University, Mike stepped down at Davie, so that he and his wife, Carol, could constantly support Carson and his new teammates.

“Coach Crowder is a very knowledgeable football man,” Herndon said. “Great guy. We still talk a lot. I still get advice from him.”

The Hornets returned to being a factor in Central Carolina Conference football in March, 2017, after Brian Hinson, the former Catawba All-American, was hired as head coach.

Now both Herndons are key assistants for Hinson; Mike as defensive coordinator; Carson with growing responsibility on the offensive side of the ball, although Hinson is still the play-caller.

It’s been a successful arrangement.

“But it’s not like we can overhaul everything and put in wholesale changes for Shelby,” Mike Herndon said.

That’s sensational defense. Other than turnovers, getting third-down stops, forcing a punt, getting the defense off the field, is the most critical defensive stat.

Herndon says that while Salisbury has several great defensive players such as linebacker Jabril Norman and lineman Zae Clay, sophomore beast Jalon Walker, who already has ACC offers, is a huge key to what the Hornets are able to do.

“There aren’t many teams that have a guy with the versatility Jalon has,” Herndon said. “He allows us to show offenses different looks, odd fronts or even fronts, without changing our personnel, and not every team can do that. He can play defensive end or linebacker equally well, so we can do a lot of things with him. He’s a great luxury to have.”

Salisbury’s goal will be to get Bess to move his feet, to force him to scramble, to  keep him uncomfortable.

“Coverage and pressure — it all has to go hand-in-hand for any defense,” Herndon said. “You can’t cover those guys Shelby has  forever, so you have to get to the quarterback. If you don’t hurry the quarterback, you might  be chasing a receiver to the end zone.”

Shelby also presents a solid running game, with a power back teaming with a scat-back.

“You watch film and you watch film, and everyone takes their guys out of the box and tries to cover,” Herndon said. “But even if they go empty (five receivers, no backs), we’ve got to keep linebackers in the box. You can’t let them spread you out because they’ll just gash you  to death in the run game. Yeah, they throw the ball well,  but we still have to stop the run first.  That’s what we do.”

Herndon said Randleman’s offensive line was one of the strengths of their team, but Salisbury’s defense completed stuffed the Tigers, holding them to 37  net rushing yards.

Walker was great. Clay was great. Corner Donavan Corpening had a big game. Blaine Shellhorn had a sack and several pressures at defensive end.

Some of those guys who rotate on the defensive line that  you don’t hear a lot about — Nick Hall, Kevin Hayes, Dontaz Witherspoon, Brandon Broadway and Kameon Alford — had strong performances.

“We can mix up a lot of guys on the defensive line,” Herndon said. “We’ve got some depth. We can keep guys fresh.”

Hinson said what Herndon does best as a defensive coordinator is to keep things uncomplicated for the troops.

“It’s not chess, it’s football,” Hinson said. ” Mike does a fantastic job. Our kids have their alignments right and their assignments right. They can recognize formations. But you have to keep it as simple as possible. If you keep it simple, kids don’t over-think. If they’re not over-thinking, they can play fast and physical, and that’s how we want to play.”

They’ll collide  in a championship game on Saturday.

Weather could be a factor. Salisbury wouldn’t mind nasty precipitation to slow down that Shelby passing game a bit. Mother Nature may cooperate.

“Shelby is a juggernaut, no doubt,”  Herndon said. “But we have some of the best kids in our school on this team and they have worked like crazy for the chance to play for a state championship. We’ll stay true to who we are and what got us here. We’ll do what we do. We’ll see if that’s enough.”

By Mike London mike.london@salisburypost.com SALISBURY —  It was one of those seasons when running backs dominated the county’s offensive statistics.... read more