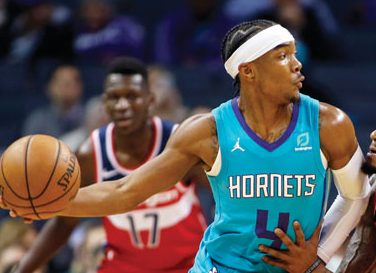 Terry Rozier scored 17 points, Bridges had 16, P.J. Washington added 15 and Cody Zeller and Bismack Biyombo both had double-doubles as Charlotte wrapped up a five-game homestand with a 2-3 record.

David Bertans scored a career-high 32 points and made eight 3-pointers for Washington. Rui Hachimura added 18 points and 12 rebounds for the Wizards, who have lost six of seven.

With the Hornets leading by one, Graham drove the left side of the lane, scored on a left-handed scoop layup and drew the foul for a three-point play with 1:34 left. Rozier added one of two free throws before Bertans made a 3 from the wing to cut Charlotte’s lead to 109-107 with 31.4 seconds left.

With the Wizards pressing up on the ball, Bridges was left alone in the corner for a 3 that he swished to make it a two-possession game and essentially seal Washington’s fate.

The Hornets led by seven entering the fourth quarter, but Bertans brought his team back by hitting a fall-away jumper and then completing a four-point play after getting fouled on a 3 from the top of the key. Chris Chiozza then knocked down another 3 to give the Wizards the lead, the first of several lead changes down the stretch.

Wizards: As if the they don’t have enough injuries, starting guard Isaac Bonga left the game in the second quarter after hitting the back of his head on the floor after getting off-balance while driving to the basket.

Hornets: Marvin Williams sat out his second straight game with knee soreness. … The Hornets let a 15-point lead in the first quarter slip away after opening the second 1 of 11 from the field. … The Hornets held the Wizards to 48 points in the first half, their fewest allowed in the opening half this season.

BULLS’ PORTER TO MISS ANOTHER MONTH WITH BROKEN FOOT

CHICAGO (AP) — Chicago Bulls forward Otto Porter Jr. will miss at least another month because of a broken left foot that was initially diagnosed as a bruise.

The Bulls said the injury was confirmed by Dr. Bob Anderson, a foot and ankle specialist who examined him Monday. The team said the small fracture became clear after repeated imaging over the past five weeks, and Porter will be re-evaluated in four weeks.

Averaging 11.2 points in nine games, he has been sidelined since he was hurt against Atlanta on Nov. 6.