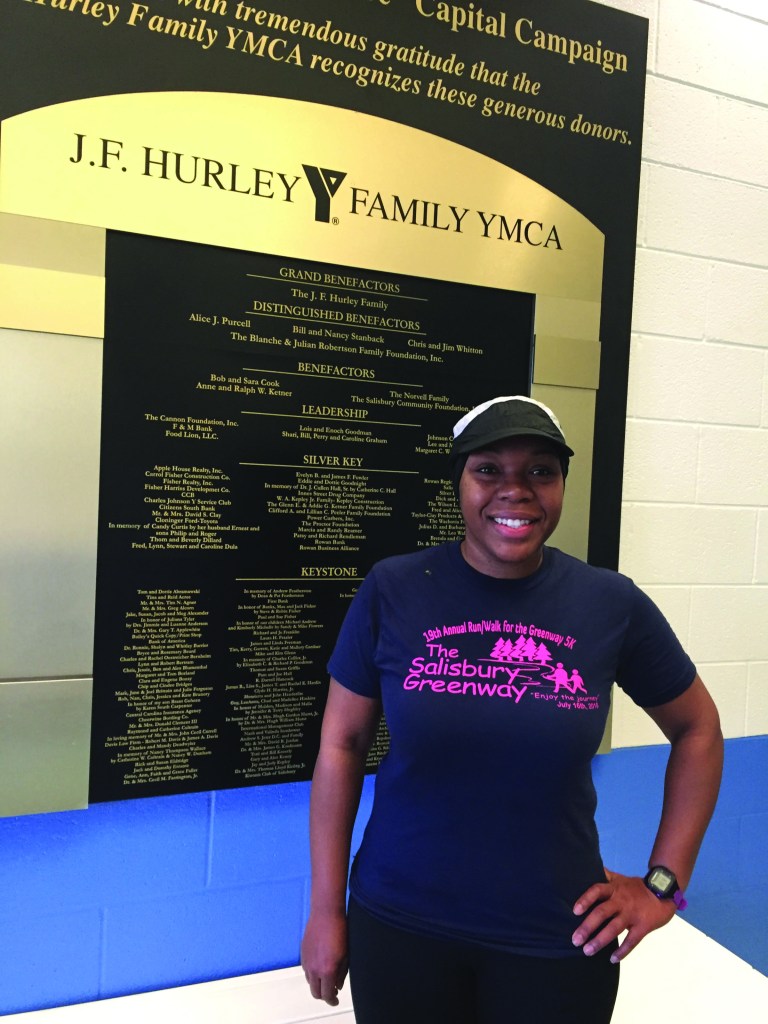 Teri Shaw after Thursday’s run, starting and finishing at the Hurley YMCA. Photo by David Freeze

With just one more month of training left on the Salisbury Post wellness program, Teri Shaw has a plan and will no doubt stick to it. No other past participant has ever been as consistent, and the results back up her commitment.

Teri, recreation coordinator for City Park Recreation Center, said, “I am still amazed at my success so far this year. When I began this journey, I did not set a total weight loss goal, not wanting to be confined to just weight loss. I set daily goals to complete my workout, eat better, and drink water!”

I asked Teri to explain why she has been the most successful participant to date. She said, “By being selfish! So much of my time is spent taking care of other people and their needs, but I had to put me first to make this work. Planning ahead, sticking to my plan, and still having a back-up plan just in case. I wanted the success, so I did my part. I didn’t include a lot of people in my plans, not wanting others to get in the way. I did what worked for me. If a 4 am workout fit for that day then that is what I did, but on other days if time got away, then 10pm worked. Either way I completed the plan I set for the day and checked it off my list! If there was a day that I fell off or my plans didn’t work, the next day was a new day. I didn’t beat myself up but learned from my mistake and made sure to keep from missing my workout again anytime soon. One bad day is not worth throwing in the towel.”

Along the way, Teri discovered something about herself. She said, “I didn’t realize I was an introverted exerciser until I went to a class with a friend. This was a class that I had been to before and seen the same people. My friend went in saying hey, small talking and calling folks by name. I just wanted to get my spot, give a hello or head nod and get ready to sweat! This works for me. I enjoy the group exercises, but I don’t have to have the interaction with others. I’m getting a little better at this and chatting more, but not much!  I go in with my workout agenda set and my goal is to check it off!”

When asked if she has anything major to improve on, Teri responded, “I am not perfect at this, but right now I can’t think of anything. I know going forward I will find things that I want to improve on. This year was about losing the weight, changing habits and creating a better lifestyle, none of which stops at the end of this year. This is just the beginning.”

With just one more month to go, Teri described her biggest take away and offers advice to others, “I’m worth it! I’m worth setting aside the time to feel better for me.  It can be done, so just start!  What works for me may not work for others but do take time to figure out what will work. Stop talking and complaining about your wellness, do something to get your plan started.”

Teri wants to keep rolling although she finds progress harder to make. She said, “Four more pounds by the end of December is my goal, realistically putting me at well over one pound a week for the year. This does not sound like much, but it is. Dropping the weight is getting harder.”

At the end of November, Teri was down 59.5 pounds overall, an average of 1.24 pounds per week. She is less than four pounds away from leaving the BMI obese class, a major goal for most of the year. Teri ran her second ever 5K on Saturday at the Santa Run 5K.

This is one determined woman, a real pleasure to work with and one who expects success. We’ll be back soon with that final report. Merry Christmas!