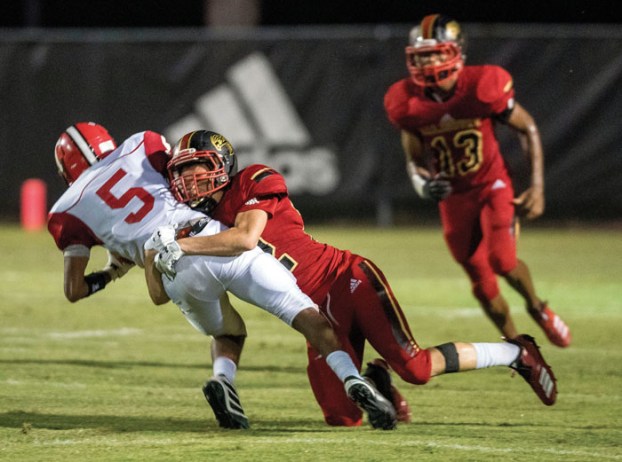 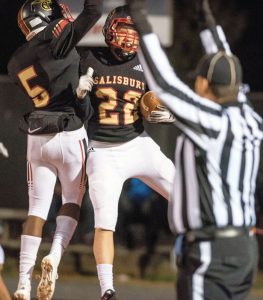 JON C. LAKEY FILE PHOTO/SALISBURY POST … Salisbury cornerback Max Morgan (22) celebrates a touchdown against Mount Pleasant on Nov. 15. Morgan had picked up a fumble and ran it in for a score. The Hornets won that game and two more since, and will play in the state 2AA East final Friday night, at Randleman.

SALISBURY —  The stat sheet supports all the nice things people say about Salisbury’s stellar defense, but in last Friday’s third-round 2AA East playoff game at Hertford County, the Hornets were trying to contain a team that looked unstoppable.

Hertford checked all the offensive boxes. Outstanding running back. Huge, athletic linemen. An accurate quarterback who came in with 35 touchdown passes and four interceptions. Greyhound receivers who had height as well as wheels.

Traveling 246 miles for the chance to take on that array of talent didn’t seem like much fun, but Salisbury’s coaching staff and players such as senior cornerback Max Morgan embraced their latest challenge.

The 5-foot-10, 160-pound Morgan knew he would be taking the biggest test of his athletic life, but he’s been surprising people for a long time.

“If you’d told me when Max was a freshman that he’d be starting when he was a senior, I would have told you, you were crazy,” Salisbury defensive coordinator Mike Herndon said. “But he’s put in the work. He’s gotten stronger. He’s matured. He’s vocal and he knows what’s going on back there.”

Morgan sustained a concussion in a preseason scrimmage and was sidelined for the Hornets’ first two games of the regular season.

“We missed him more than we thought we would,” Herndon said. “That’s when we started realizing how important Max is to us.”

Morgan settled in with a DB corps that also includes Lawon Blackwell, Donavan Corpening and Jadarius Wood during the regular season and has elevated his game during the playoffs. In Salisbury’s first-round wipeout of Mount Pleasant, Morgan scored a touchdown on a fumble return.

“(Linebacker) Jabril Norman just tore the ball out of a kid’s hands, and I was right there to scoop and score,” Morgan said. “I hadn’t scored a touchdown since the eighth grade when I was the running back for China Grove Middle.”

In Round 2, Salisbury a faced a triple-option Washington team that was coming at the Hornets almost exclusively on the ground. Even the cornerbacks could think run on virtually every snap Washington took.

“Max did a great job in run support,” Salisbury head coach Brian Hinson said. “He had quite a few stops.”

Washington had been the No. 2 seed in the bracket, but film study quickly showed Hertford County’s Bears would present more problems. Hertford could run or throw almost equally well — 217 passing yards per game and 161 rushing yards per game. With that offensive mix, Hertford had thumped Salisbury’s fellow Central Carolina Conference teams Ledford and North Davidson in the first two rounds of the playoffs, winning both games by three touchdowns.

“They put 41 points on North Davidson and North Davidson won against us,” Morgan said. “That gets your attention, but we have a lot of confidence and belief in ourselves, We believe we have one of the best defenses around.”

Herndon’s defensive game plan vs. Hertford would be to take away the run, even with that monstrous offensive line and even with a terrific running back (Erion Holley), who had rolled for more than 1,300 yards.

Morgan was thrilled to have the vote of confidence, but he also was going to be matching up against 6-5 receiver Avery Hoggard and 6-3 Armand Vinson, and both of them could fly.

“Hertford has a lot of size and a lot of quickness,” Morgan said. “Definitely our biggest challenge.”

The ride was long. The pregame mood was tense, but confident.

“I could see Max was ready,” Norman said. “It was the most focused I’ve ever seen him.”

The game was as fiercely fought as expected. The Hornets were backed up most of the first quarter.

Hertford County had the ball eight times in the first half. Eight times the Hornets’ defense stopped them.

“Their offense puts a lot of pressure on you, but the way you fight pressure is by bringing pressure of your own,” Salisbury defensive end Blaine Shellhorn said. “It was tough. Our DBs had a tough assignment, but they were holding up.”

Field position turned in the second quarter. The Hornets got a short field. Salisbury back Mike McLean found the end zone for a 6-0 lead.

Hertford resorted to trickery late in the half — a double pass, with Holley looking to throw to the 6-5 Hoggard. Morgan was the guy on the spot. He stayed home. He made the play.

“They lined up with both of the tall receivers on the same side,” Morgan said.  “I knew they were coming at me.  They’re inside our 30, so I was definitely looking for some kind of fade to try to score.”

Holley threw it up for his guy to go get it.

Hoggard went high.  Morgan went as high as he could.

“It’s basically a jump ball, their guy is 6-5 and Max is 5-10, and for a split-second, their guy actually had the ball,” Hinson added. “But Max ripped it out of there before they came down. That breakup was one of the bigger plays of the game.”

Salisbury took a 6-0 lead to the break.

On Hertford County’s 10th possession, in the third quarter, the Bears finally dented the Hornets’ defense with a long pass play for a touchdown. After the PAT, the Bears led, 7-6.

“We had two guys who broke on a route, but that happens sometimes,” Morgan said. “You’ve got your emotions when a miscommunication happens and you give up a score, but everyone kept their heads up.”

The Hornets won more of the battles upfront than they lost. Zae Clay was a tower of strength as he always is for the Hornets in the interior.

“Zae’s best game of the season,” Hinson said. “In some ways, he took over the game.”

With seven minutes left, Salisbury’s offense got the go-ahead touchdown, with quarterback Vance Honeycutt turning the corner for the 12-7 lead that proved to be enough.

And the Hornets’ defense held and held and held again. Norman would recover three fumbles/muffs, including a game-saver with 1:20 remaining, and Hertford threatening one more time.

“We gave up some yards, but just one score,” Morgan said. “Nothing cheap and nothing deep, we always say. We kept them in front of us. Their quarterback is a lefty, so his first read was always to his left. Picking up things like that from film really helps.”

When it was over, Hertford had 18 rushing attempts for 93 yards. Hertford threw the ball a season-high 36 times for 185 yards, but the Hornets had only one breakdown and allowed only one big play. Hertford’s potent offense produced 100 fewer yards than it had been averaging.

“We thought they’d try to run it more than they did,” Herndon said. “But our guys showed we could match them upfront.  After about the second series, our guys were coming to the sidelines saying that they had this, that they knew they could stop them. We weren’t perfect, not by any means, but it was another really good defensive effort. We beat a talented bunch.”

While Randleman is the No. 1 seed for a reason, the Hornets are only 3-point underdogs, according to the Massey Ratings.

This trip will only be 51 miles, much closer than Washington and Hertford County.

“We’re road warriors and all, but I’m really glad this one is a little closer,” Morgan said. “They look good on film, but everyone is beatable.”