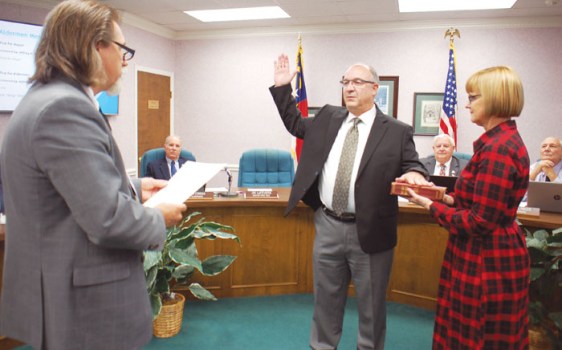 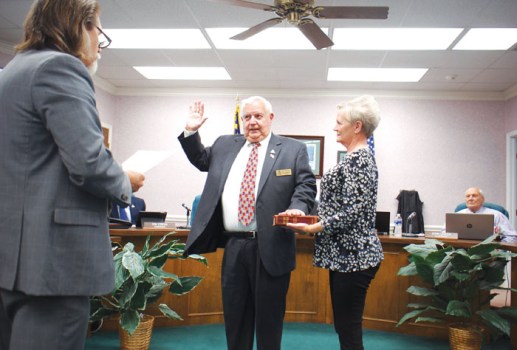 GRANITE QUARRY — During an evening when November’s Granite Quarry election winners took their oaths for new terms, a former mayor gave them something to chew on.

Former Mayor Mary Ponds told the new town board she and others don’t like the dissension they are “seeing and feeling” among its members.

Most residents want their town officials to work in harmony, and “I don’t think many of us see that,” Ponds said, speaking during a public-comment period.

Ponds continued that sometimes it appears to her board members have their own personal agendas.

“I think Granite Quarry is better than what we are showing and what we are doing,” she said, adding the board “can’t do things under the table.”

“If you’ve got to do it under the table, it shouldn’t be done.”

About the most specific thing Ponds alluded to was the town’s operating with interim staff positions, including interim Town Manager Larry Smith and now an interim town clerk.

Meanwhile, Larry Smith is approaching a year on the job as interim manager.

“The word ‘interim’ in this town is becoming constant,” Ponds said.

While she wanted the board to hear her concerns, Ponds also congratulated Mayor Bill Feather and Alderman Jim Costantino on their re-elections and Doug Shelton on his first term as an alderman.

They join Kim Cress and John Linker, whose seats were not up for election this year.

Ponds also praised outgoing Alderman Jim LaFevers, who lost his longtime seat to Shelton. Later in the evening, the new town board appointed LaFevers to the Parks, Events and Recreation Committee.

Ponds also had positive things to say about the town’s Christmas lights.

No one responded to Ponds’ overall observations, except later during board comments Costantino said, “I think as a board we should work together as a team. … We’ve got a good group here.”

The board also took care of some other business that comes with a new board. By a unanimous vote, the four aldermen chose Linker as mayor pro tem, a position LaFevers had held.

The board appointed Aubrey Smith as interim town clerk and Chip Short as town attorney.

Board members also took their assignments to various committees.

Cress and Shelton will both serve on the Parks, Events and Recreation Committee and the Community Appearance Committee.

Linker and Costantino will continue serving on the Revitalization Team and the Town Hall remodeling committee.

Feather and Shelton will be the board’s liaisons to the Transportation Advisory Committee of the Cabarrus-Rowan Metropolitan Planning Organization and also delegates to the Centralina Council of Governments board.

In another matter of town business, Granite Quarry has moved to purchase roughly 10 acres that takes in the old Balfour Quarry on Balfour Quarry Road. About 7 acres will be used as the new leaf and limb site.

The town intends to pay James David Marple $60,000 for the land, which includes lots on both sides of the road. The deal is set to close on Dec. 21, pending an inspection and approval by a state mining engineer.

Of note to Granite Quarry residents, sponsored Christmas trees in Granite Lake Park will continue to go up through Friday.

Santa at the Park and the town tree lighting will be from 3 to 5 p.m. Saturday, with the tree lightings at 5 p.m.