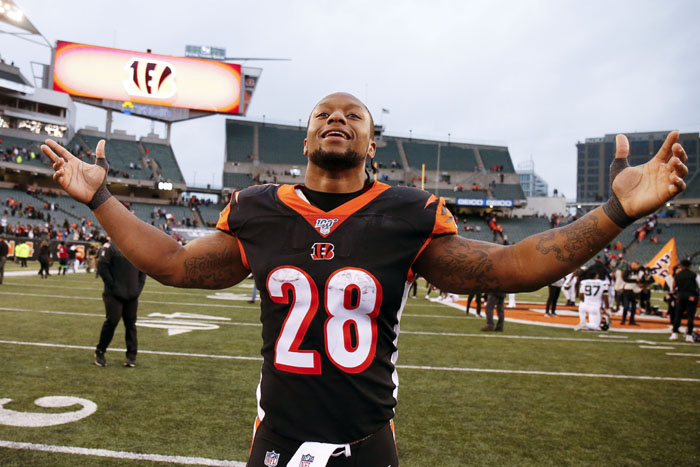 CINCINNATI — Andy Dalton returned from his three-week exile Sunday and got a long-awaited win for the coach who benched him, throwing a touchdown pass during a 22-6 victory over the New York Jets that ended the longest losing streak in Cincinnati Bengals history.
The Bengals (1-11) had lost 13 in a row since the end of last season, with newcomer Zac Taylor waiting until December to get his first head coaching win. Taylor benched Dalton after the eighth loss, deciding to see whether Ryan Finley fit into the team’s long-term plans.
With the rookie struggling and the season careening toward 0-16, Taylor reversed course and went back to Dalton. He made the difference in front of the smallest crowd in Paul Brown Stadium history. Carlos Dunlap and Sam Hubbard dunked Taylor with ice water in the final seconds.
Dalton got beyond his initial bitterness over the benching and led the NFL’s lone winless team to the breakthrough victory in front of 39,804 fans. Dalton also set a couple of franchise passing marks along the way.
The Jets (4-8) had their three-game winning streak snapped, unable to extend their high-scoring momentum behind Sam Darnold. The Jets also made some dubious NFL history, becoming the first team to lose to two teams who were 0-7 or worse in the same season. New York lost to Miami, which was 0-7 at the time, on Nov. 3.

STEELERS 20, BROWNS 13
PITTSBURGH — The Steelers and Browns kept things civil in their highly anticipated rematch, which ended the way they always seem to end at Heinz Field: the Steelers walking off in triumph.
Devlin “Duck” Hodges threw for 212 yards with a touchdown and an interception in his second career start. Rookie Benny Snell ran for 63 yards and his first NFL touchdown, and the banged-up Steelers exacted revenge for their whipping at the hands of the Browns two weeks ago with a 20-13 victory on Sunday.
Pittsburgh (7-5) boosted its postseason chances by rallying from 10 points down thanks in large part to Hodges, a rookie undrafted free agent who happens to be a champion duck caller in his down time. He was aided by the emergence of wide receiver James Washington, who caught four passes for 111 yards and a juggling 30-yard score late in the first half.
The Browns (5-7) saw their three-game winning streak come to a crashing halt when they failed to handle a Pittsburgh offense riddled with injuries and inexperience at the skill positions. Baker Mayfield completed 18 of 32 passes for 196 yards with a touchdown and an interception; he played the entire second half with his right hand in a protective glove after smacking it against the face mask of Pittsburgh linebacker Bud Dupree.
Cleveland failed to pull even with the Steelers in the standings and sweep the season series from its rival for the first time in 31 years.
The teams’ first meeting on Nov. 14 ended with an ugly altercation between Cleveland defensive end Myles Garrett and Pittsburgh quarterback Mason Rudolph that ended with Garrett hitting Rudolph in the head with Rudolph’s helmet. The ensuing fallout — which included Garrett being suspended indefinitely; Rudolph fending off Garrett’s allegation that he used a racial slur shortly before things got out of hand; suspensions for Browns defensive end Larry Ogunjobi and Steelers center Maurkice Pouncey; and more than $700,000 in fines.
That reignited a rivalry that’s been dominated by the Steelers since Cleveland returned to the NFL a generation ago.

RAVENS 20, 49ERS 17
BALTIMORE — Neither rain, wind nor the San Francisco 49ers’ top-ranked defense could prevent Lamar Jackson from guiding the Baltimore Ravens to their franchise-record eighth straight win.
Jackson weathered miserable conditions to run for 101 yards and Justin Tucker kicked a tiebreaking 49-yard field goal as time expired in a possible Super Bowl preview. The combination of driving rain, a stiff wind and San Francisco’s rugged defense was difficult for Jackson to handle. He completed only 14 of 23 passes for 105 yards and lost a fumble.
But the double-threat quarterback was solid when it counted. Not only did he fuel the NFL’s top-ranked rushing attack, he directed a clutch drive that lasted nearly 6½ minutes before Tucker ended it with a kick that tore through the raindrops and between the uprights.
Baltimore (10-2) improved to 16-3 with Jackson as a starter and 12-0 when he rushes for at least 70 yards. In addition, Jackson became the first quarterback in NFL history to have four 100-yard rushing games in a season.
Raheem Mostert ran for a career-high 146 yards and a touchdown for the 49ers (10-2), now tied with New Orleans for the best record in the NFC.

CHIEFS 40, RAIDERS 9
KANSAS CITY, Mo. — Patrick Mahomes threw for a touchdown and ran for a touchdown, while Juan Thornhill returned a pick 46 yards for another score.
LeSean McCoy and Darwin Thompson also had TD runs for the Chiefs (8-4), who took a two-game lead over the Raiders by finishing off a season sweep. That means Kansas City can clinch a fourth straight division title with a win over New England and an Oakland loss to Tennessee next weekend.
Oakland (6-6) sure didn’t play like a team fighting for a piece of the division lead.
Derek Carr dropped to 0-6 at Arrowhead Stadium with another miserable outing, throwing for 222 yards with a touchdown and two interceptions. The Raiders failed to score twice in the red zone, were penalized 12 times for 99 yards, and seemingly quit when Kansas City put together a 9 1/2-minute drive almost entirely on the ground that soaked up most of the fourth quarter.
When the Raiders finally scored a touchdown in the last minute, the Chiefs blocked the extra point and returned it for two points — one more insult to Oakland in a game full of them.
It was the Raiders’ seventh straight loss in Kansas City.

RAMS 34, CARDINALS 7
GLENDALE, Ariz. — Jared Goff threw for 424 yards and two touchdowns, and Robert Woods had 172 yards receiving.
The Rams (7-5) bounced back from an embarrassing 45-6 loss to the Baltimore Ravens on Monday night by embarrassing the Cardinals and stayed in the hunt for a playoff berth.
Goff methodically picked apart the Cardinals defense, which was the NFL’s worst against the pass coming into the game. He had thrown no touchdowns passes and five interceptions over his previous three games, but responded with 323 yards passing in the first half as the Rams built a 20-0 lead.
Woods finished with a game-high 13 catches, Tyler Higbee caught seven balls for a career-high 107 yards and a touchdown, and Cooper Kupp had six catches for 65 yards and another score. Todd Gurley II ran for 95 yards and a touchdown.
The Cardinals (3-8-1) had a week to rest and prepare for the Rams after coming off their bye week but looked rusty instead of refreshed. They’ve lost five straight games.

BRONCOS 23, CHARGERS 20
DENVER — Brandon McManus’ 53-yard field goal as time expired, set up by a long interference call, capped a furious final 14 seconds.
Rookie quarterback Drew Lock’s debut win for Denver came a month after Brandon Allen beat Cleveland. It made the Broncos the first team in league history to have two quarterbacks start and win their NFL debuts in the same season.
The winner by McManus, who stormed off the field just before halftime when coach Vic Fangio changed his mind about letting him attempt a record 65-yard field goal, was set up by a 38-yard pass interference call on Chargers cornerback Casey Hayward Jr.
Diontae Spencer returned the kickoff 26 yards to the Denver 28 after the Chargers tied the game at 20 on Michael Badgley’s 46-yard field goal with 14 seconds remaining. With 9 seconds left, Lock threw deep down the right sideline to Sutton, who caught his two first-quarter touchdown passes.
Sutton collided with Hayward and the yellow flag came out. The Chargers argued vehemently about the defensive pass interference, giving the Broncos the ball at the Chargers 35-yard line with 3 seconds remaining.
The Chargers (4-8) continued jawing with both the Broncos (4-8) and the officiating crew as the Broncos ran onto the field following McManus’ field goal.

TITANS 31, COLTS 17
INDIANAPOLIS — Tye Smith returned a blocked field goal 63 yards for the go-ahead touchdown with 5:02 left to play.
The Titans (7-5) snapped a three-game losing streak in the series, winning for only the third time in the past 17 meetings. It also allowed Tennessee to leapfrog the Colts in the AFC South.
Adam Vinatieri missed three field goals for Indy (6-6), with two being blocked, including the decisive kick that Dane Cruikshank got his hand on. Vinatieri has missed 14 kicks this season: eight field goals and six extra points.
But Vinatieri’s misses weren’t the Colts’ only problem.
Jacoby Brissett was picked off twice, the first resulting in a 31-yard field goal that tied the score at 17 late in the third quarter, the second resulting in Ryan Tannehill’s 40-yard TD pass to Kalif Raymond with 3:02 left that sealed the victory.
Indy also lost a fumble deep in Tennessee territory with two minutes left when the Titans won a challenge.
Derrick Henry carried 26 times for 149 yards and one touchdown, becoming the first runner to top the 100-yard mark against Indy in 30 games. Tannehill was 17 of 22 with 182 yards and two TD passes as he improved to 5-1 as Tennessee’s starter.

PACKERS 31, GIANTS 13
EAST RUTHERFORD, N.J. — Aaron Rodgers threw four touchdown passes in the snow and the Packers rebounded from a dismal West Coast performance.
The Packers sent the Giants to their eighth straight loss, their worst skid since 2004.
Rodgers finished 21 of 33 for 243 yards with no interceptions on a slippery, snowy day at MetLife Stadium. Rodgers hit Davante Adams on touchdown passes of 8 and 17 yards, found a wide-open Allen Lazard for 37 yards and capped the performance with a 1-yarder to Marcedes Lewis.
The Packers (9-3) also intercepted Giants rookie Daniel Jones three times, with the picks setting up 10 points.
Jones, who had not thrown an interception in the last two games, finished 20 of 37 for 240 yards, including an 18-yard touchdown pass to Sterling Shepard. Aldrick Rosas added field goals of 27 and 45 yards for New York (2-10), which has a 7-21 mark since Pat Shurmur took over last season.

DOLPHINS 37, EAGLES 31
MIAMI GARDENS, Fla. — DeVante Parker made two acrobatic touchdown receptions and kicker Jason Sanders also had a circus-like scoring catch.
Miami overcame a 14-point deficit in the second half with three touchdowns in less than 13 minutes — a remarkable achievement for one of the NFL’s lowest-scoring teams.
The Dolphins (3-9) won for the third time in their past five games, a surprising and perhaps costly turnaround for a team that will be shopping for a franchise quarterback in the 2020 draft.
The Eagles (5-7) lost their third game in a row and missed a chance to pull into a tie with Dallas atop the NFC East.
Trickery helped the Dolphins, who twice opted not to kick on fourth down and instead threw for a touchdown. The second such gamble by rookie coach Brian Flores paid off when Miami shifted out of field goal formation before holder Matt Haack threw a 1-yard pass to Sanders.
Parker did much of the rest. He finished with seven receptions for a career-high 159 yards and two scores, both on leaping grabs.

BUCCANEERS 28, JAGUARS 11
JACKSONVILLE, Fla. — Nick Foles ended his first three drives with turnovers that Tampa Bay turned into touchdowns. It was Jacksonville’s fourth consecutive loss by at least 17 points and could mean the end of coach Doug Marrone’s tenure with the team. At the very least, the skid will have owner Shad Khan considering changes over the final month of the season.
Marrone, meanwhile, has to decide what to do at quarterback. He benched Foles at halftime, switching back to rookie sensation Gardner Minshew.
Minshew rallied the Jags (4-8) and had a chance to make it a seven-point game in the fourth quarter. But his hot pass slipped through Dede Westbrook’s hands and into Sean Murphy-Bunting’s arms for Jacksonville’s fourth turnover of the day.
The Buccaneers (5-7) have won two straight for the first time in coach Bruce Arians’ first season. Jameis Winston was 21 of 33 for 268 yards and didn’t throw an interception for the first time in a month.
___
More AP NFL: https://apnews.com/NFL and https://twitter.com/AP_NFL