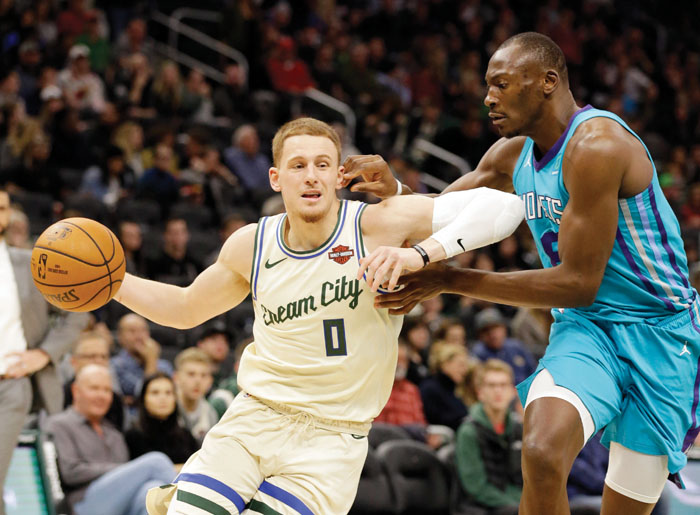 By CHARLES F. GARDNER Associated Press
MILWAUKEE (AP) — Giannis Antetokounmpo couldn’t keep his double-double streak going, though it’s hard even for the NBA’s MVP to put up big numbers in only 20 minutes.
Antetokounmpo scored 26 points but his streak ended at 19 games when he grabbed nine rebounds in his shortest outing of the season, and the Milwaukee Bucks coasted to a 137-96 victory over the Charlotte Hornets on Saturday night.
Milwaukee (17-3) won its 11th straight and matched its highest point total of the season. The Bucks held a 17-point halftime lead and extended it to 101-75 entering the fourth quarter, allowing Antetokounmpo to sit out the final period.
His streak of double-doubles to open a season left him short of Bill Walton’s record of 34 with the Portland Trail Blazers in 1976-77. Kareem Abdul-Jabbar had 29 for the Los Angeles Lakers in 1975-76.
“I should have left him in,” Bucks coach Mike Budenholzer said with a wry smile. “He’s doing amazing things and there’s more to come. “We’re trying to have conversations with him about being healthy and fresh and how important that is. Pretty incredible if you’re being mentioned with the greats of our game.
“Pat Connaughton (team-high 10 rebounds) probably stole it. He steals all the rebounds.”
Antetokounmpo wasn’t worried about the end of his run.
“That is not how I am built,” Antetokounmpo said. “I am not built around stats. Obviously, I am just here to win.”
The Bucks put nine players in double figures and finished November with a franchise-best 15-1 record, losing only on a buzzer-beating shot in Utah on Nov. 8. The 41-point margin was the team’s largest of the season.
Milwaukee has the league’s second-best record, behind the Los Angeles Lakers (17-2).
Hornets veteran forward Marvin Williams said Antetokounmpo’s dominating play was no surprise.
“He’s so competitive, always wants to win,” Williams said. “I feel he always wants to play the right way. I’ve always been a fan of his.
“I don’t feel like he did anything different than he normally does. He plays with such aggression on both ends of the floor. He attacked the basket and made plays for himself. Then when it wasn’t there he kicked it out to his shooters.”
Robin Lopez, starting at center in place of brother Brook, sparked the Bucks with three 3-pointers and 13 points in 16 first-half minutes and wound up playing 24 minutes. Robin was in the starting lineup with Brook sidelined by back soreness.
“It was so cool to see him start the game that well and it just gave us a huge boost,” Budenholzer said. “Brook is such a big part of what we do and to have Robin step in and make those, it was really important to us. And it feels like it’s been coming.”
Robin Lopez ended 3 of 5 from beyond the arc and improved to 11 of 32 from 3-point range (34.3%), putting him ahead of his brother’s percentage (28.9% on 97 attempts) this season.
“Numbers speak for themselves, right,” Robin Lopez said of his newfound 3-point prowess. “We got a lot of motion. We did a great job moving the ball, moving without the ball.”
Milwaukee shot 56.2% from the field (54 of 96) and limited Charlotte to 36.6% shooting (37 of 101).
Devonte’ Graham led the Hornets (8-13) with 24 points and Terry Rozier added 19.
Milwaukee pulled away in the third quarter as it outscored the Hornets 35-26. Wesley Matthews had 12 of his 14 points in the quarter, going 3 of 4 from 3-point range and adding a three-point play.
Khris Middleton came off the bench for the third straight game since returning from a thigh injury and added 15 points, and Ersan Ilyasova and D.J. Wilson each had 11.
TIP-INS
Hornets: Center Cody Zeller returned to action after missing the two previous games with a left hip contusion He had 11 points in 20 minutes off the bench. … Graham has made huge strides this season, entering Saturday averaging 17.9 points while shooting 41.1% from 3-point distance. “You’re on the scouting report now; their best defender is on you now,” Hornets coach James Borrego said of the second-year player. “You’re getting their best look, their best scheme. Teams are blitzing him now and the kid is handling it extremely well. He has that poise about him.”
Bucks: Milwaukee’s 17-3 start is tied for the best 20-game start in franchise history (with the 1970-71 and 1971-72 teams). … Center Dragan Bender was active for Milwaukee after scoring 19 points and grabbing 11 rebounds in the Wisconsin Herd’s 133-115 win over the Erie BayHawks in G-League play on Friday night in Oshkosh. Bender entered Saturday’s game in the third quarter and splashed a 3-pointer for his first points with the Bucks. He finished with 12 points.
UP NEXT
Hornets: Host Phoenix on Monday.
Bucks: Host New York on Monday.

Dobbins, Fields power No. 2 Ohio State past No.…