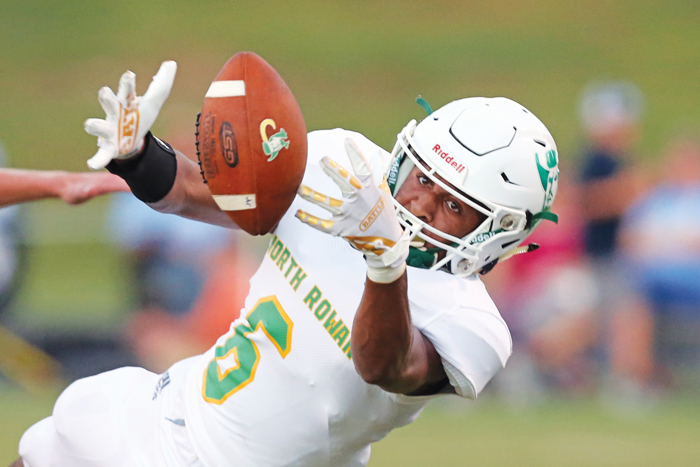 But it’s all about how you come back from mistakes. Coming back is something North’s junior receiver Tyshon Sifford does really well.

North employs four receivers at a time, but almost 75 percent of North Rowan’s offensive play calls are runs out of the spread offense. Senior back Malcolm Wilson is definitely the team’s go-to guy, so the Cavaliers’ receivers don’t get a ton of chances to make big plays. Mostly, they’re asked to block.

Sifford did get a pass-catching chance early in the Cavaliers’ second-round 1AA playoff game with Princeton on Friday — and didn’t come through. It might have been the best ball North quarterback Kyree Sims has thrown all season, but Sifford couldn’t hold on to it in the end zone.

Sifford felt awful. He felt worse after holding penalties stymied the Cavaliers’ opening drive. A few minutes later, the Big Green Nation was down 14-0 at Eagle Stadium and reeling.

It’s time like these that North is fortunate to have assistant coaches such as Nick Means. Means, who grew up in Thomasville, became one of the all-time great receivers at Catawba College. He can show guys how to run routes and catch footballs. More than that, he teaches them how to handle life, how to deal with adversity, how to keep their heads up in negative situations.

“Sure, I caught a lot of passes for Catawba, but I also dropped my share of passes,” Means said. “Everyone drops some. It’s hard being a receiver because you’re not engaged in every single play, like a lineman is. You’ve just got to realize after a drop that you’ll get another chance. Focus on catching the next one.”

North got back to 14-6 on one more long, terrific run by Wilson, who has made so many of them in his brilliant career.  Sifford is not an imposing looking guy, 5-foot-10 and pretty light, but he helped spring Wilson for 80-plus with a tough block on the right flank.

“There were just two guys out there, and I got the linebacker,” Sifford said.

Late in the first half, with North still down 14-6, but driving, the call was for a jet sweep by Sifford.

“The kid can fly,” North head coach Ben Hampton explained. “People who scout us, I don’t know if they realize just how fast he is. We’re on Princeton’s 20-yard line, and I’m sure they’re looking for Malcolm. We felt like if we could get it to Tyshon on the jet sweep, if we could block it up, if we could get him it to him quick, we could get him out on the edge with a full head of steam.”

Sifford took a deep breath when his number was called. He’d be sprinting from right to left, toward the Princeton sideline, hoping the timing between Sims and him would be precise. If his fellow receivers on the left side made their blocks, he’d be able to turn the corner and get some yards.

“I just made up my mind to run to run it hard, to run the way I can,” Sifford said. “I was still a little bit upset about the drop, but no excuses.”

North center Kendall Reid did his part with the snap. Sims also executed. He got the ball in Sifford’s hands smoothly, and Sifford was at top speed very quickly. At the 20, nearing the sideline, he could see defenders converging. He turned it up, securing the football, bracing for a hit.

“The first contact was at the 15,” Hampton said. “He ran right through it.”

There was another collision at the 10 and Sifford was smacked once more at the 5, but he wasn’t going to be stopped. He carried tacklers with him to the end zone, as fans went crazy, It was 14-12. Sim’s 2-point conversion run got the Cavaliers to halftime in a 14-all tie.

North got the ball first in the second half for one of the game’s pivotal possessions.

The Cavaliers got good field position on the kickoff return. Then Sifford got a chance to catch a deep ball. This time he got it done.

“At first, I thought Kyree was throwing the ball to Denerio (Robinson), but then I saw the ball sailing over Denerio’s head and coming at me,” Sifford said. “I just knew I had to catch it. This was my chance to make a play. If I caught it, we’d be in great position. We’d be in the red zone.”

Sifford’s leaping grab near the North sideline was the catch of the night, good for 44 yards. As the North’s P.A. man says a lot — First and 10, BGN!

“Tyshon also had them beat on a wheel route that would have been a huge play, but Kyree underthrew him on that one,” Hampton said. “But the thing is, Tyshon keeps putting himself in position to make plays for us. He has some ability. This is a kid that’s starting to come in to his own.”

The key reception against Princeton was only the fifth of the season for Sifford, but he also had a huge 52-yard TD catch against Albemarle. The jet-sweep TD on Friday was the third time he’s taken a running play to the end zone.

Sifford is mentored not only by Means but by his older brother, Sakil Harrison, one of the top receivers in North history. Harrison piled up 100 receptions and 1,728 receiving yards from 2012-14, so there’s a lot of wisdom and technique he can pass along.

North will go into this third-round game without defensive end Brandon Jefferson.

North found out on Wednesday afternoon that linebacker Jordan Goodine will be allowed to play against Tarboro. Hampton said Tuesday afternoon that the Cavaliers haven’t given up on getting Goodine reinstated after an ejection for a “flagrant” hit against Princeton that didn’t look flagrant, at all, on film to the coaching staff. Sure enough, Goodine was reinstated on Wednesday.

Sifford, who has experience as a defensive back, probably will play some defense at Tarboro, as North makes adjustments.

North will be a 35-point underdog, but the Cavaliers have been counted out before.

“When we were 0-3, I don’t think anybody thought we’d still be around for the third round,” Hampton said. “Our motto all along has been — why not us?”