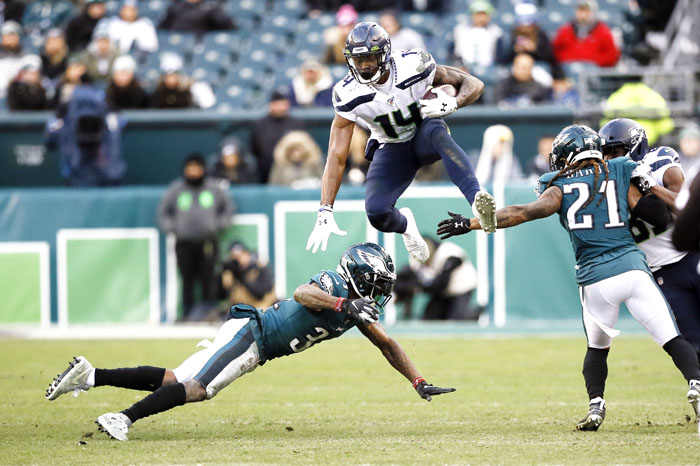 By The Associated Press
PHILADELPHIA — Rashaad Penny ran for a career-best 129 yards, including a 58-yard touchdown, Russell Wilson threw one TD pass and the Seattle Seahawks beat the Philadelphia Eagles 17-9 Sunday.
Missing their top three wide receivers, leading rusher and two Pro Bowl offensive linemen, the Eagles (5-6) couldn’t do much on offense and hurt themselves with three turnovers inside Seattle territory and another near midfield.
The Seahawks (9-2) remain undefeated on the road in six games.
The Eagles didn’t have wideouts DeSean Jackson, Alshon Jeffery and Nelson Agholor, running back Jordan Howard and right tackle Lane Johnson from the start. Right guard Brandon Brooks left in the first quarter. First-round pick Andre Dillard made his first career start at right tackle after playing the left side all season and was benched at halftime.
The Seahawks were without star defensive end Jadeveon Clowney.
Philadelphia’s defense did its best to keep it close, sacking Wilson six times.
But Carson Wentz struggled again and the offense was awful. Wentz was 33 of 45 for 256 yards, one TD, two interceptions and lost two fumbles, including one on a handoff exchange.
Wilson was 13 of 25 for 200 yards, one TD and one pick.

JETS 34, RAIDERS 3
EAST RUTHERFORD, N.J. — Sam Darnold threw two touchdown passes and ran for another score for the Jets’ first three-game winning streak in over two years.
Brian Poole returned an interception 15 yards for a TD and the rest of the Jets defense made things miserable for Derek Carr, who was pulled by coach Jon Gruden with just under two minutes left in the third quarter.
The Raiders (6-5) came into a rain-soaked MetLife Stadium on a three-game winning streak with an eye on a possible AFC West first-place showdown at Kansas City next week. Instead, they got outplayed by a suddenly resurgent Jets (4-7) team that pulled away in the second half.
Darnold was 20 of 29 for 315 yards — the fourth 300-yard game of his career — with TDs to Robby Anderson and Ryan Griffin in another efficient outing that helped New York to its first three-game winning streak since Weeks 3-5 of the 2017 season. The Jets didn’t punt until the 2-minute mark of the third quarter.
Carr fell to 2-9 in his career in games that started with the temperature below 50 degrees. The temperature at kickoff at the Meadowlands was 43 degrees.

BILLS 20, BRONCOS 3
ORCHARD PARK, N.Y. — Josh Allen threw two touchdowns passing and Shaq Lawson had two of Buffalo’s four sacks. The Bills have their best record through 11 games in 23 years.
Buffalo improved to 8-3, to match its best start since Hall of Fame quarterback Jim Kelly’s final season in 1996, while keeping the Bills firmly in position to secure their second playoff berth in three years.
John Brown made a diving 34-yard touchdown catch, and Cole Beasley scored on an 18-yard reception. Allen finished 15 of 25 for 185 yards and threw his first interception in 172 attempts.
Frank Gore had 65 yards rushing to up his total to 15,289 and move ahead of boyhood idol Barry Sanders into third on the NFL career list. The 15-year veteran also increased his total to 19,154 yards from scrimmage to pass Marshall Faulk for fourth on the list.
Rookie Ed Oliver and Star Lotulelei had a sack apiece, while cornerback Tre’Davious White snuffed out a potential scoring drive by intercepting Brandon Allen at the Buffalo 8 in the final minute of the first half.
The Broncos dropped to 3-8 in Vic Fangio’s first season as coach.

BROWNS 42, DOLPHINS 24
CLEVELAND — Jarvis Landry caught two touchdown passes against his former team and the Browns won their third straight in their first game since losing star defensive end Myles Garrett to a season-ending suspension.
Landry couldn’t wait to get back at the Dolphins (2-9), who had him for four seasons before they decided not to give him a long-term contract extension and traded him to Cleveland in 2018. He got his revenge, finishing with 10 catches for 148 yards.
Baker Mayfield had 327 yards passing and hit a TD pass to Odell Beckham Jr., and Joe Schobert had two interceptions as the Browns (5-6) continued their climb back into the AFC playoff hunt.
The lopsided win capped an emotionally complicated week for the Browns in the aftermath of Garrett being banned by the NFL for pulling off Pittsburgh quarterback Mason Rudolph’s helmet and hitting him over the head with it. That touched off a wild brawl in the final seconds of Cleveland’s 21-7 win over the Steelers on Nov. 14.
Garrett’s appeal was denied this week in New York, where he told the league Rudolph used a racial slur, something the league said it didn’t find any evidence of.
On Saturday, the league fined Garrett and 32 other players from Pittsburgh and Cleveland for their roles in the ugly melee between the bitter rivals, who will meet against next Sunday at Heinz Field.

STEELERS 16, BENGALS 10
CINCINNATI — Devlin “Duck” Hodges took over for struggling Mason Rudolph and threw a 79-yard touchdown pass, sparking the depleted Steelers and keeping the Bengals the only winless team in the NFL.
Hodges connected with James Washington on the game-turning play in the third quarter, leaving Pittsburgh (6-5) with a quarterback decision as it moves forward without Ben Roethlisberger.
The Steelers defense has steadied them through the transition, and it had a major impact in Pittsburgh’s 10th straight win over the hapless Bengals (0-11), who set franchise records for worst start and longest losing streak.
Tyler Boyd made a catch and was stripped by Devin Bush at the Steelers 8-yard line in the fourth quarter, preserving the lead. Bud Dupree sacked Ryan Finley and forced a fumble that he recovered with 2:38 left, closing it out.
What’s left of the Steelers offense — hollowed out by injuries and a suspension — struggled in the first half and prompted coach Mike Tomlin to switch from Rudolph to Hodges, who provided an immediate boost. His touchdown pass to Washington gave the Steelers a 10-7 lead and got thousands of Terrible Towels twirling at Paul Brown Stadium.
Hodges filled in for one game after Rudolph suffered a concussion and directed a 24-17 win over the Chargers on Oct. 13. Tomlin went back to Rudolph as soon as he was healthy.
Now, he’s got a big decision as the Steelers try to stay in the playoff chase.

BUCCANEERS 35, FALCONS 22
ATLANTA — Massive defensive lineman Vita Vea turned receiver to haul in his first career touchdown, one of three scoring throws by Jameis Winston. Tampa Bay escaped last place in the NFC South.
Winston shook off two more interceptions to post his sixth straight 300-yard passing game, leading the Buccaneers (4-7) to just their second victory in the last seven games.
Atlanta (3-8) had pulled even with Tampa Bay at the bottom of the division standings with a modest two-game winning streak. But the Falcons couldn’t keep the momentum going, dropping to 1-4 at Mercedes-Benz Stadium in what has become a lost season for a team that reached the Super Bowl just three years ago.
Winston has been picked off an NFL-high 20 times but completed 18 of 28 for 313 yards, including a pair of touchdown passes to Chris Godwin. Yet the scoring play everyone will remember was a little 1-yard pass in the final minute of the first half to Vea, a 6-foot-4, 347-pound defensive lineman.
With the Bucs facing second-and-goal, Vea checked into the game — apparently to provide an extra blocker. After lining up at fullback, he slipped into the flat on play-action by Winston, going completely uncovered as he gobbled up the short pass for his first career reception.

BEARS 19, GIANTS 14
CHICAGO — Khalil Mack set up a touchdown with a strip-sack and Allen Robinson had a season-high 131 yards receiving for Chicago.
Trying to salvage something from a disappointing season, the Bears (5-6) bounced back from a loss to the Los Angeles Rams. The Giants (2-9) dropped their seventh straight and clinched their third losing season in a row.
Mack broke through in the third quarter for just his second sack in seven games. Held without a tackle at Los Angeles, the three-time All-Pro nailed Jones deep in New York territory, and Chicago’s Nick Williams recovered at the 3. That led to a 2-yard touchdown run by quarterback Mitchell Trubisky to make it 19-7.
New York cut the lead to five with 4:10 left in the game when Golden Tate hauled in a 23-yard pass on fourth-and-18. The Bears then went three-and-out before Pat O’Donnell pinned the Giants at the 6 with a 61-yard punt, and Chicago hung on.
Trubisky threw for a season-high 278 yards, including a touchdown to Robinson, and two interceptions after missing the final drive the previous week because of a right hip pointer. Robinson had six catches.

REDSKINS 19, LIONS 16
LANDOVER, Md.— Quinton Dunbar intercepted Jeff Driskel in the final minute, Dustin Hopkins hit the go-ahead field goal from 39 yards with 16 seconds left as Washington snapped a four-game losing streak.
Rookie quarterback Dwayne Haskins picked up his first NFL win after leading Washington (2-9) into field goal range following Dunbar’s interception. Haskins finished 13 of 29 for 156 yards and an interception but made a couple fewer mistakes than Driskel, who was picked off three times as the Lions (3-7-1) lost their fourth in a row and third since starter Matthew Stafford went out with injury.
For long stretches, the game was a comedy of errors with neither team looking like it wanted to win. Haskins fumbled on third down on Washington’s first possession; Detroit turned the ball over on consecutive offensive plays; Lions kicker Matt Prater missed a 39-yard field goal; and his teammates were baffled on Steven Sims’ 91-yard kickoff return for a Redskins touchdown — after muffing the catch.
Driskel finished 20 of 32 for 207 yards, with a touchdown pass and the three interceptions.
___
More AP NFL: https://apnews.com/NFL and https://twitter.com/AP_NFL