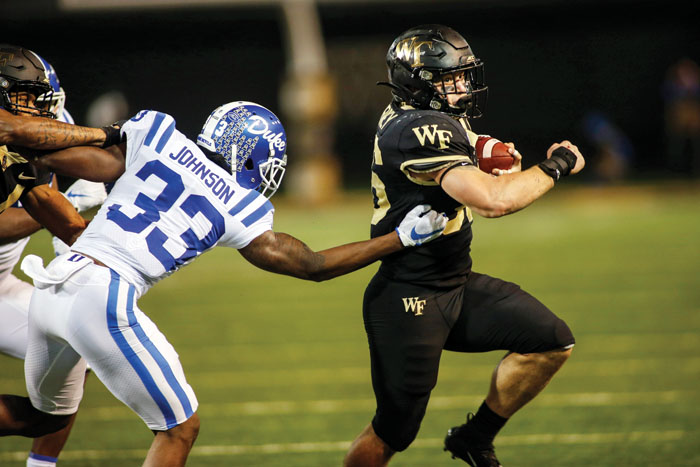 Wake Forest and Duke will be among the teams affected by the new scheduling alliance announced Tuesday to ‘protect the collegiate model.' (AP File Photo/Nell Redmond)

WINSTON-SALEM (AP) — Sophomore kicker Nick Sciba connected on four field goals while setting an NCAA record, and Wake Forest held off Duke for a 39-27 victory on Saturday night.
The Demon Deacons (8-3, 4-3 Atlantic Coast Conference) withstood Duke’s Damond Philyaw-Johnson’s two kickoff returns for touchdowns.
Philyaw-Johnson’s 98-yard kickoff return gave the Blue Devils (4-7, 2-5) a 27-26 lead with 9:34 remaining. But Kenneth Walker III scored on a 14-yard run about a minute later to put Wake Forest ahead for good. Philyaw-Johnson had a 97-yard kickoff return for a touchdown in the first quarter.
The Demon Deacons put the game away on Cade Carney’s 18-yard TD run with 3:27 left.
Sciba kicked field goals of 38, 34, 44 and 25 yards to give him 32 consecutive made field goals, surpassing the record of 30 set by Chuck Nelson of Washington in the 1981-82 seasons. Sciba’s 44-yarder, his longest of the season, set the record and extended Wake Forest’s lead to 23-13 late in the third quarter.
“It’s great for him (Sciba),” Wake Forest coach Dave Clawson said. “You keep going to the well and he keeps getting it done.”
Jamie Newman completed 14 of 25 passes for 284 yards, including a 62-yard touchdown pass to Kendall Hinton. Newman also rushed 29 times for a career-high 144 yards that included a 42-yard scoring run. Walker added 113 yards rushing on 17 carries.
Duke’s Quentin Harris completed 14 of 23 passes for 163 yards, including a 23-yard TD pass to Noah Gray.
The Blue Devils managed only one first down until picking up two in the final minute of the first half while running out the clock. Philyaw-Johnson responded to Sciba’s first field goal by racing through a seam near the right sideline for his first career TD.
“There’s always something positive you can take away from a game,” Duke coach David Cutcliffe said. “Those returns were no accident. Damond is fast, and he’s fearless.”
The Demon Deacons, who led 13-10 at halftime, extended the lead to 20-10 thanks to Newman’s 62-yard pass to Hinton on the opening series of the second half.
AJ Reed kicked field goals of 30 and 43 yards for the Blue Devils.
Wake Forest amassed 610 yards total offense while holding Duke to 290 yards. Yet, the Deacons trailed with less than nine minutes to play.
“Obviously, our kickoff coverage is atrocious,” said Clawson, who ordered a short kickoff away from Philyaw-Johnson after Wake’s final TD. “If we could just cover kicks, it wouldn’t have been a close game.”
TAKEAWAY
Duke: The Blue Devils entered the game averaging only 11 points during their four-game losing streak, scored more than 17 points for the first time since a 41-23 victory over Georgia Tech on Oct. 12. Though held to only one first down in the first 29 minutes, the Devils’ offense showed some life in the second half with 10 first downs and a 65-yard TD drive to open the fourth quarter.
Wake Forest: The Deacons’ offense struggled at the start on a rainy night but picked up the pace when the rain slowed in the second quarter. With a victory against last-place Syracuse on Saturday, the Deacons would tie Louisville for second place in the ACC’s Atlantic Division. Their kicking teams have some work to do, though. In addition to Philyaw-Johnson’s TDs, the Deacons gave up a 21-yard punt return that set up Duke’s first-half field goal.
UP NEXT
Duke: Plays host on Saturday in its regular-season finale to Miami, which lost to Florida International.
Wake Forest: Plays at Syracuse in its regular-season finale on Saturday.
___
More AP college football: http://apnews.com/tag/Collegefootball and http://www.twitter.com/AP_Top25